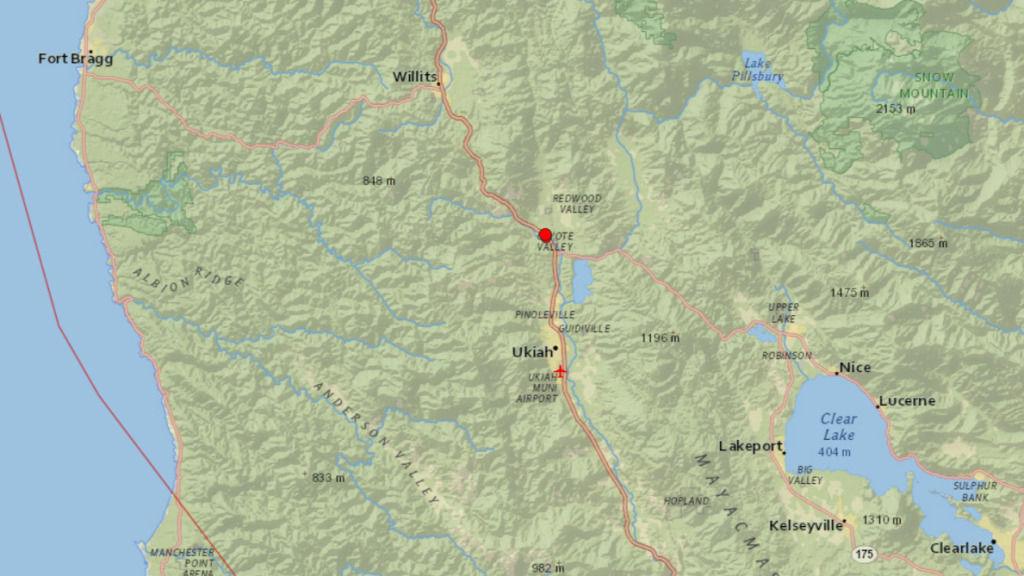 The location of two of the earthquakes that struck Redwood Valley this morning, March 3, 2020. Not all of the quakes that occurred this morning are pictured.

UPDATE 11 a.m. — This situation is developing. Cal Tech reports at least five earthquakes in Redwood Valley happening between 10:12 a.m. and 10:27 a.m. At least three of these would have been large enough to be easily felt by people in the area, with the fourth unlikely to be felt except by those with the most sensitive inner ear, or precariously balanced at the time. The largest of the quakes measured a 3.9 on the scale, which is sufficiently large to cause a big rattle and perhaps some items falling off shelves.

A small correction: it does not appear that any of the quakes happened directly under the Coyote Valley Reservation, but rather very near to the reservation — though it’s not perfectly clear from the map.

The California Institute of Technology (Caltech), which operates its own seismology lab, lists the quakes as follows:

At this time there are no reports of substantial damage. The quakes appear to be happening at around a depth of six kilometers (3.73 miles), which means that even though they are larger, they will often not feel as strong as quakes higher to the surface.

UPDATE 10:28 a.m. — A second earthquake, this one much stronger, measuring 3.6 shook Redwood Valley only minutes after the first one.

ORIGINAL
WILLITS, 3/3/20 — A small earthquake rattled Redwood Valley this morning, and was felt as far away as Willits. The temblor measured 2.9 and was centered effectively right beneath the Coyote Valley Reservation, very near U.S. Route 101. The quake had a depth of roughly 3.75 miles (6km) and struck at 10:12 a.m.

So far there are no reports of any damage.