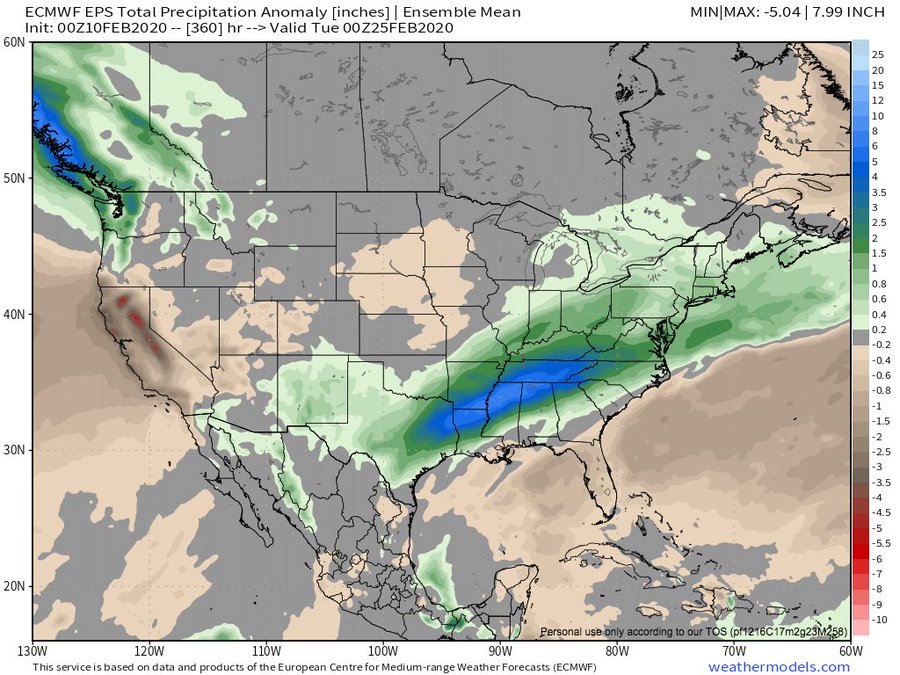 This map shows deviations from average rainfall total, for this time of year, across North America. As you can see California is in a rainfall deficit. This deficit is distinct from a drought which is a longer term measure.

WILLITS, 2/10/20 — It’s been a dry winter in Northern California, and meteorologists are forecasting a continuation of this trend for at least the next couple weeks. As can be gleaned from the map above, which shows rainfall variation from the average for this time of year, most of the North Coast is between two and three inches of rainfall below average, which parts of the Sonoma County and the northern Sierras are as much as five inches behind.

As explained by Daniel Swain, a climate scientist and meteorologist who runs the excellent Weather West Blog, the culprit is a “ridge” of high pressure off the coast of California that is pushing the jet stream north, and keeping moist air from reaching the state. That’s an extremely simplified explanation — for anyone who wants to understand these phenomenon in greater detail this entry in the Weather West Blog “Warm and dry, then cool (and still dry), heading into February” has a very detailed account.

And while the state is not yet in a drought, and reservoir levels remain high across most of the state due to capture from the last few years, this winter dryness does not bode well for the prospects of wildfire this coming summer. Still, as of early Feb. the rainfall totals in parts of NorCal were half of average. From Weather West:

Seasonal precipitation accumulation to date has now fallen well behind average (in some places, <50% of average) in northern portions of the state…As a result of low precipitation and relatively warm temperatures, snowpack is now falling behind typical values rather quickly (currently around ~70% of average statewide). That said, state reservoir levels remain in good shape for the moment due to carryover from recent years…[but] it is worth noting that drought impacts upon California’s ecosystems, and subsequently statewide wildfire risk, are not mitigated by water stored in the state’s reservoirs.

Here is Swain’s tweet describing the current status of precipitation:

And here is a somewhat more intricate explanation:

And here’s a comment on what this means for fuel moisture levels and wildfire risk, from another notable and excellent California meteorologist, Rob Mayeda. Swain also notes that a very dry Feb. followed by a burst of wet spring weather is actually a very bad case scenario from a wildfire perspective because, “Late rains allow seasonal grasses/brush to grow rapidly, but accumulated precip deficit would prime older vegetation to burn.”