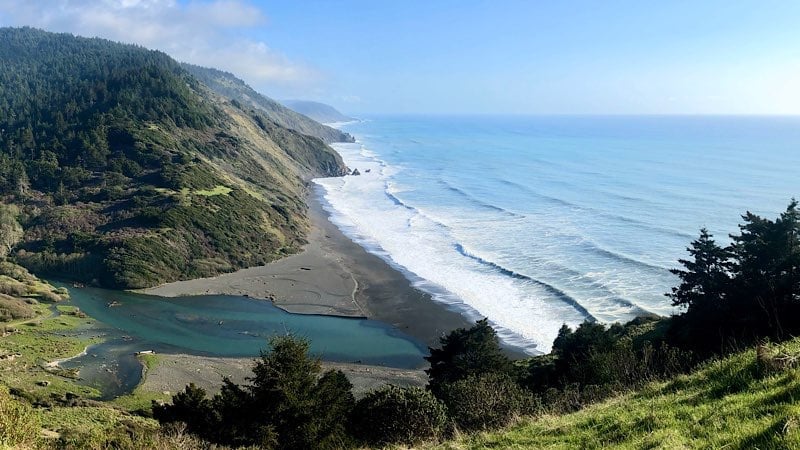 Nowhere near a king tide at Usal Beach.

MENDOCINO Co., 1/12/20 — The biggest tides of the year, known as the “king tides,” swept the California coast this weekend, prompting high surf warnings from the National Weather Service and resulting in stunning photos from up and down the shore. The California King Tides Project and California State Parks are collecting photos from the public of the wave event, which will reoccur on February 8 and 9.

Did you catch the tides on the coast this weekend? King tides occur several times a year, and instead of being a scientific term, the phenomenon is defined by the occurrence of the highest tides (learn more here). The Coastal Data Information Project tracks wave measurements from buoys placed along the coast, which can be found at their website.

More information about king tides can be found in this podcast with Coastal Commissioner Sara Aminzadeh, who discusses how king tides can provide a glimpse into what changes might occur as sea levels rise. You can see NOAA’s sea level predictions here, and see historic photos from the California coast provided by the California Coastal Records Project.

The California King Tides Project is collecting photos from up and down the coast, and you can submit your king tides photos at this link. The tides will return in early February, so if you missed them this weekend, you can check them out then — but make sure to take caution on the shore.

If you’re curious about the celestial physics behind this nautical phenomenon, this video does a very good job of explaining:

On February 8, there will be a king tides event at Captain Fletcher’s Inn, details included below:

Mendocino County, Navarro-by-the-Sea
Captain Fletcher’s Inn, 500 Navarro Beach Road
Feb. 8, 9am-noon
Presented by Navarro-by-the-Sea Center for Riparian and Estuarine Research.
The historic Captain Fletcher’s Inn will be open to the public during this Open House. The event is free with lots of parking at Navarro Beach. Come and enjoy the king tide from a safe distance, and stop by the Inn to warm up and enjoy a free tour. Coffee, tea and light refreshments will be available to visitors, along with a warm fire in the restored fireplace. Visitors are encouraged to document and share pictures taken as part of the King Tides Project taken at Navarro Beach and other locations along the coast. Info: Jim Martin, (707) 877-3477 or [email protected]

Here’s a video from of this weekend’s waves shared by the Point Cabrillo Lighthouse: