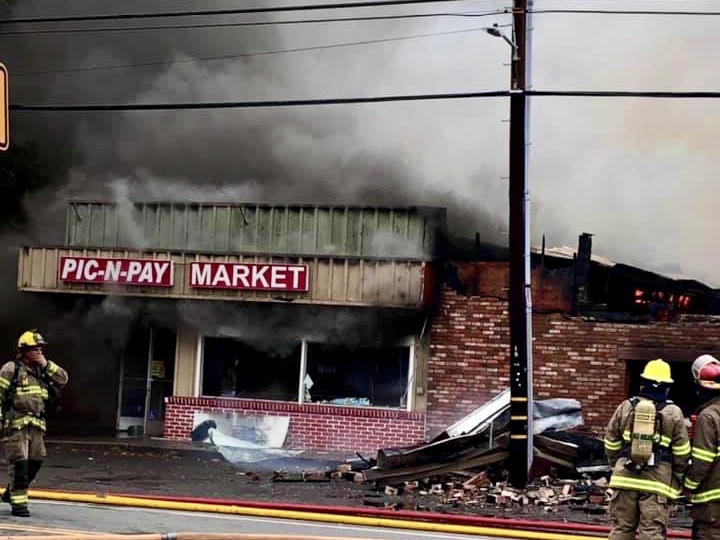 The ruins of the Pick 'n' Pay market in Boonville after the fire today, Dec. 5, 2019 - courtesy Lucinda Walker

Editor’s note: This is a developing situation being updated frequently, for more information continue scrolling down.

UPDATE 7: p.m. — The CHP has announced that the 128 is now partially open again through Boonville, though one-way traffic control is in place and delays of 10 to 15 minutes should be expected.

UPDATE 3:30 p.m. — Here are some more pictures of the burned out building taken about 3 p.m. As you can see the fire has destroyed the shop and restaurant and residential structure, yet continues to burn, and could keep burning for quite some time. Expected continued road delays.

UPDATE 3:05 p.m. — CalTrans and the MCSO have clarified that SR-128 is closed from SR-253 to Mountain View Rd. by the high school, and that the closure may last five hours. That’s essentially all of downtown Boonville that has been closed off. CalTrans advises that there are no local detours and that their personnel are on the scene.

UPDATE 2:55 p.m. — According to scanner chatter, firefighters are assuming a “defensive strategy” against this fierce fire, and will be on the scene for many more hours working to knock it down, then many hours after that to fully mop it up. The 128 remains closed to through traffic at the fire. If you are traveling in the area assume that you’ll be seeing significant delays. If you have not yet started down the road it may be advisable to take an alternate route.

MENDOCINO Co., 12/5/19 — A major structure fire has forced the closure of SR-128 in Boonville. The fire began in the small apartments next door and then spread into the building which is occupied by Lizbby’s and the Pick & Pay.* These buildings are located on the northeast side of the street, across from the post office.

As of time of publication the fire is continuing to burn, and has become large enough that officials have had to close down the highway to allow emergency personnel and fire engines to stage and work. There is also some risk to civilians, and bystanders have been moved out of the way.

The fire began at about 1 p.m. apparently in a residence, though the cause has not been established. No one has been injured, and there are between 15 and 20 firefighters on the scene, with six engines, from both Cal Fire and the Anderson Valley Fire Department.

The Mendocino County Sheriff’s Office sent out the following message via Nixle alert:

ROAD CLOSURE – Highway 128 in Boonville, CA is closed in both directions due to a structure fire in the area of Pic N Pay (14161 Highway 128). Fire and emergency personnel are actively working in the area and the roadway is blocked due to fire equipment and hoses. Please avoid the area as emergency personnel are still dealing with an active fire. There is no estimated timeframe for when the roadway may be opened.

*Correction: An earlier version of this article mistakenly referred to the Pick & Pay as the Pick & Save.