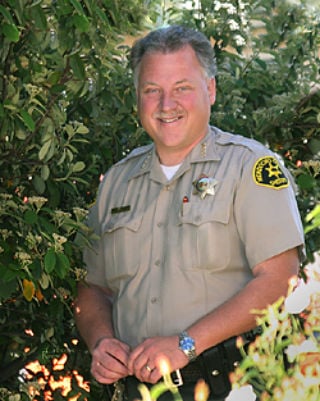 The sheriff will be retiring as of December 28, meaning that Kendall will temporarily assume the role of sheriff, until such time as the Mendocino County Board of Supervisors can appoint a new sheriff to finish out Allman’s term before. It appears very likely that Kendall will be that appointee, especially given the strong endorsement of Allman, and the fact that he is the current undersheriff. However, the position of county sheriff is an elected one, the normally scheduled next election for the office will be in 2022, Kendall said in a brief interview that he is likely to run for the office in ’22 if he is appointed.

In his announcement Allman said that he would not be leaving the area and would be directing his efforts after retirement towards continuing to deal with the mental health services situation in Mendocino County.

The sheriff also thanked his staff, and many others, and wrote some heartfelt words about his time as the county’s top law enforcement officer; but there is no one better to explain that than him, so here’s his statement:

Today is the day that several newspapers have reported my retirement effective 12/28/2019. It’s true. This is a decision that I have made based on many things, but one of the the most important is the fact that we have a very good undersheriff, Matt Kendall, who is ready to take the helm. It has been my honor to work for Mendocino County as a lawman since 1985. I have been lucky enough to be your Sheriff for the past 13 years and there are no words which would adequately describe how proud I am to have been Sheriff of the Mendocino County Sheriff’s Office. As the transition takes place, I have to thank the men and women who work very hard to keep our county safe. I’m leaving at a time when things are very good and I’m not taking this for granted.

I’m not moving from the area and I intend to spend a lot of time focused on improving the mental health services throughout our county. Together, we’ve accomplished a lot, yet the hardest work is still ahead of us. The current ambulance crisis is another project which I will be working on.

I am very lucky to have so many people who have supported me in my time as your Sheriff and I will never forget how fortunate I have been. Together, we have faced fires, floods, droughts, a tsunami and several other incidents which have gone down in our county history as major. In 2008, we had 134 lightning fires in one night and in 2011, we had the most expensive and extensive manhunt in our county history. In 2017, we experienced the most tragic disaster in our history, where 9 citizens perished. The sadness and pain of that tragedy which we all experienced will always linger. Throughout all of these disasters, we have had First Responders step up and do the necessary work which had to be done. Many of these first responders are volunteers and they have my heartfelt appreciation. Our volunteer firefighters and our search and rescue volunteers are citizens who strive to work very hard to make our county a better place, for little or no pay. Thank you very much.

To the men and women of the Mendocino County Sheriff’s Office: Thank you. You are appreciated for what you do and how you conduct yourself. I know each of you and I am very proud of you. Continue wearing your uniform with the rich pride that has been established by the past employees who have built our good reputation.

I’m going to sum it up in very few words: Thank you for allowing me the privilege of being your Sheriff for the past 13 years. I have made many friends throughout my tenure as your Sheriff and will never forget the kindness which has been shown to me.