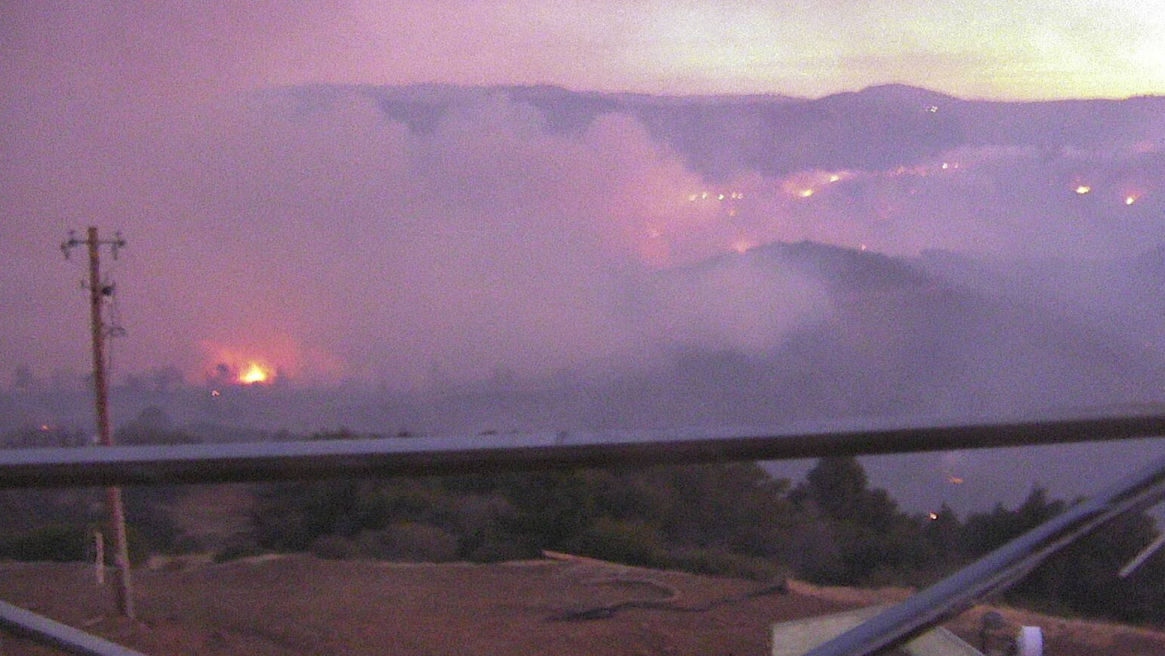 UPDATE 4 p.m. — Here are a few updates in general about the situation with the Kincade Fire.

The fire began in the area of the Geysers, a massive geothermal power generation facility spread across several square miles and linked together by power lines. There are also third-party power transmission lines running through that areas, moving power from the power plants to the grid. The fire did sweep through at least part of this facility, but there is no official word on the cause of the fire. Here is a statement made by the company that runs the Geysers power generations facility.

A statement from the Calpine Corporation

The Kincade Fire flashed through a portion of our Geysers geothermal facilities late yesterday. All employees are safe and accounted for and we believe further threat has passed. As safety permits and daylight arrives, we will conduct a thorough assessment. Some of our operations have been temporarily suspended due to minor damage but we expect production to resume very soon.Our internal power line system had been deenergized due to weather conditions and consistent with our fire prevention protocols before the fire started. We do not believe our facilities caused the fire. There are power lines operated by third parties across The Geysers.

Here is a statement from the City of Healdsburg about their current conditions. The city itself is not under any evacuation order or warning

UPDATE 11:45 a.m. — Governor Gavin Newsom, along with a number of state fire and public safety officials, gave a press conference this morning addressing the Kincade Fire, and the ongoing PG&E power shutdowns (video on their Facebook).

Cal Fire also gave a press conference near the scene of the fire at noon today in Geyserville to provide an update on the Kincade Fire:

As of 11:10 a.m., the agency is reporting the fires as having consumed 10,000 acres and 0% containment. There have been no new evacuations since this morning. However, heavy smoke is impacting a broad region of the North Bay around the fire.

UPDATE 7:15 a.m. — This map shows hot spots over the last 12 hours, and gives a good idea of roughly where the fire is burning. It is continuing to grow:

UPDATE 7:00 a.m. — The fire has grown to 10,000 acres, steadily moving south with long-range spotting — meaning that smaller embers have been carried long distance by wind sparking new smaller spot fires, downwind of the primary fire. This kind of fire behavior is very dangerous, as it means that fires grow very quickly, but it also means that they can jump major barriers and containment lines. Case in point, this fire appears to have jumped SR-128, near Moody Lane, forcing the mandatory evacuation of all of Geyserville.

It appears at this time that the fire remains on the eastern bank of the Russian River. If the fire has burned as far as Moody Ln. and the 128, that means it has come down out the dry hills and has been burning through vineyards and farms. Cal Fire’s latest update, which came out this morning before sunrise, said that no structures had been destroyed, but noted that formal assessment of structure damage would begin today.

All of Geyserville now under mandatory evacuation order

The community of Geyserville is now under evacuation order.  The Kincade Fire has crossed Highway 128 near Moody Lane and is heading west.  If you’re in Geyserville, leave now.  Head south to evacuation centers at Healdsburg Community Center or Windsor High School.

All other evacuation orders and warnings remain in place.

Instructions:
Evacuate immediately if you are in the community of Geyserville.

The wind was extremely strong last night, peaking at 79 mph, and still blowing at a sustained 25 mph and higher.

UPDATE 1:30 a.m. — Here are some maps showing the dramatic growth of the fire:

This website is excellent and shows the locations and provides links to various fire cameras scattered about the North Coast, it also will eventually show some infrared data, once satellites make passes overhead, that will precisely show the hotspots of the fire.

10/24/19 — A fast moving conflagration, the Kincade Fire, has exploded across northern Sonoma County, quickly growing to 5,000 acres and forcing the evacuation of portions of Geyserville and farther south along SR-128, east of U.S. Route 101. Containment remains officially at 0% with the fire spotting wildly in the extremely high dry winds. Over the radio scanner, firefighters can be heard repeatedly explaining that the fire has once again spotted and reestablished itself further downwind. Firefighters have described the fire’s rate of spread as “dangerous.”

As of around 11:30 p.m. the fire was being listed as only 400 acres, and by `12:30 a.m. firefighters were reporting tremendous growth up to 5,000 acres, burning in the dry hills maybe 4 or 5 miles northeast of Geyserville. While Healdsburg is not immediately threatened, an evacuation warning (meaning people should be prepared to leave if they need to) has been issued for the unincorporated areas north of Healdsburg.

Here is what the Sonoma County Sheriff is saying about evacuations:

Evacuation order for all of Red Winery Road, all of Alexander Mountain Road, Highway 128 from Geysers Road to River Road including the casino, and all roads off River Road. Leave immediately if you are in these locations.

If you feel unsafe, evacuate.

The evacuation warning for northern unincorporated Healdsburg and Geyserville is still in place.

Instructions:
Evacuate now if you are on Red Winery Road, Alexander Mountain Road, Highway 128 from Geysers Road to River Road, or all roads off River Road.

This fire comes, of course, as Pacific Gas and Electric has shut off across northern California, and the fire appears to be burning in the vicinity of The Geysers, a series of hydro-thermal power-plants, that provide much of the electricity in Sonoma County, though it’s unclear how close the fire is to this important infrastructure.

This is all happening while California experiences a statewide wind event, of extremely strong, dry offshore winds blowing over vegetation that has been repeatedly dried out by previous such events. An even stronger wind event is expected to hit the state Saturday. Wind gusts of up to 32 mph have been measured near the fire, and of up to 69 mph in the mountains to the northeast.