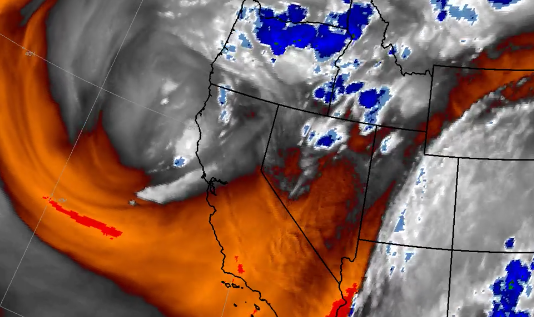 UPDATE 10:50 p.m. — One little update from the National Weather Service, over 180 lightening strikes in the Emerald Triangle today. And though there is rain, fire is still possible, so remain vigilante.

UPDATE 10:10 p.m. — Readers from southern Ukiah, all the way up to Myers Flat (about 90 miles north) are reporting rain and lightening, from heavy downpours to a light sprinkling.

Readers in Covelo, and along the Mendocino coast have also reported heavy rain and lightening, showing that the storm is covering essentially all of the county.

Here is a snapshot of the Doppler radar at about 10 p.m. showing heavy rain from about Redwood Valley all the way up to Medford Oregon:

WILLITS, 8/9/19 — A sudden summer rain shower, and a little lightning and thunder, has swept into northern Mendocino County, drenching Willits and neighboring areas. The showers began with some rain at around 7:40 p.m., this evening and were followed by a brief downpour at around 8:30 p.m., having now settled into a sprinkle.

What are you seeing?

The National Weather Service predicted cooling temperatures and scattered showers today, but mainly warned of much lightening over Trinity County and neighboring areas, actually declaring a red flag warning (a state of heightened fire risk) over that area.

But father south we got cool humid weather, with a pretty good rain, that the National Weather Service out of Hanford described as resembling “a wet season scenario not August.”

Here are are a few more Tweets from the NWS describing the odd weather.

Editor’s note: This is what people in California (myself included) be like when it rains in the summer: