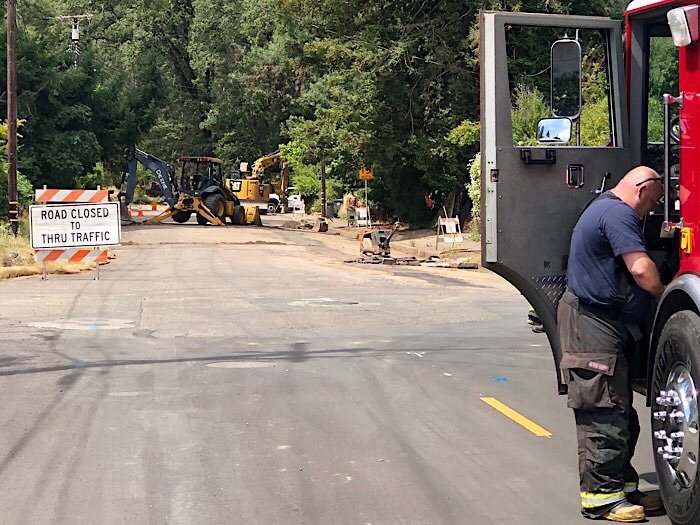 The site of the gas leak, and a Little Lake Fire engine caused the leak - by A.F. Baumann

Editor’s note: This is a developing situation and we are updating continually. Please keep scrolling down for more information and for the original reporting.

UPDATE 1:28 p.m. — The gas leak has now been stopped, and residents of the evacuated are may return home. Crews managed to “squeeze” the line around 1:15 p.m. according to PG&E.

UPDATE 1:25 p.m. — The City of Willits has opened the Willits Community Center to anyone who has had to be evacuated due to the gas leak.

A spokesperson for PG&E stated that the gas leak occurred at 11:00 a.m. and that they first arrived on the scene at 11:20 a.m. They do not yet have an estimate for when the gas line will be “squeezed,” stopping the leak, but note that nine customers will be without gas at that point. PG&E will then repair the line.

For more information about the cause of the accident, the repair, and other details keep scrolling down

UPDATE 1:20 p.m. — As of about 12:30 p.m. PG&E had two crews in picks ups on the scene, but were waiting for a much larger truck to arrive from Santa Rosa, with a backhoe, and potentially other special equipment — so it could be some time before the leak is fixed. It is likely that PG&E will have to tear up a different section of street, some yards down from the leak, in order to access the pipe and shut it off, hence the wait for the larger truck and equipment. Presumably operating directly on the leak would carry a substantial explosion risk.

Little Lake Fire Deputy Chief John Thomen was at the scene with other firefighters, and Willits PD officers. He explained that the pipe is a two inch plastic gas main, running in the street. He did not venture a guess as to how much gas is escaping, but the air smelled of gas for several blocks, and the leak itself was making a very loud whooshing or hissing noise. One firefighter described it as sounding like a small jet plane.

Thomen elaborated that only the area within about 30 feet of the leak had any substantial explosion risk, and that there could be an asphyxiation risk for someone very, very close to the leak. Natural gas is not substantially poisonous in small amounts, though in large amounts it is explosive, and can result in asphyxiation by displacing the oxygen from the area.

A steady breeze was blowing from the west, with gusts up to nine miles per hour. As a result the houses downwind, along Pine St. as far as North St. have been evacuated.

The construction company Argonaut Contractors, had been working on a large project in that area this morning. Willits City Council Member Greta Kanne explained in a brief interview by telephone, that the project is part of a, “major road refurbishment, and it includes replacing the old main water-line as well as updating sewer.”

She elaborated, “Those areas have been plagued by leaks for the last many years, and if you look at the condition of Maple St. and upper Pine St. it’s pretty easy to see the condition they’re in…the whole job is to replace the underground utilities and refurbish the street surfaces on those three streets: Pine, Maple, and Spruce.”

Willits City Manager Stephanie Garrabrant-Sierra explained, “Argonaut will be paying for all of these problems that is why they are a well respected company they’re bonded and we require pretty heavy duty insurance.”

She added, “If they need to rip up a little street to do the repair that’s fine — Argonaut is going to pay for it…and PG&E will charge the contractor, and they charge a pretty hefty amount for their time.”

She elaborated that the backhoe got too close to the gas line, saying, “It happens, it is not as unusual as you’d think.” She also said that work will recommence as soon as the gas leak is repaired.

UPDATE 11:44 a.m. — The Willits Police Department has advised that it will be between one hour and one hour and a half before the PG&E repair crew can arrive to stop the gas. They made this announcement at 11:37 a.m.

Gas Break UPDATE: WPD was advised that it will be an hour or an hour and a half before PG&E Gas crew will arrive to shut off the gas.

In addition they have clarified that no schools have been affected:

No schools have been evacuated. WPD is in contact with the school district. You will be advised if evacuation is necessary.

Furthermore, they ask that people not inundate the 911 system, or the police station with calls about the leak, as their system cannot take so many calls.

Please do not call the police department questions about the gas leak unless it is an emergency. We cannot handle the call volume and emer

ORIGINAL
WILLITS, 8/21/19 — A gas leak in the vicinity of Pine St and Spruce St. in Willits has resulted in police evacuating a two block radius from the leak.

Police are urging caution, and urging residents to evacuate now. The dangers are both of explosion and that the gas itself can be dangerous in large quantities. Pacific Gas & Electric is sending a crew.

A spokesperson for Pacific Gas & Electric stated that the gas line was a two inch plastic main-line, not a line branching to a house. The line was ruptured in the 300 block of Pine St., by a construction crew that is unaffiliated with PG&E, while using a backhoe.

Here is the Nixle alerte from the Willits Police Department:

Gas Main Break UPDATE: Evacuations at Pine and Spruce have been expanded to a two block radius due to environmental conditions.

Here is a map of the area, with a pin dropped at the intersection:

Here is the original Nixle:

Everyone near Pine & Spruce should be aware of a gas line break. Residents are being evacuated in a one block radius..

Everyone near Pine & Spruce should be aware of a gas line break. Residents are being evacuated in a one block radius..
Instructions:
Stay away from area. PG&E is enroute