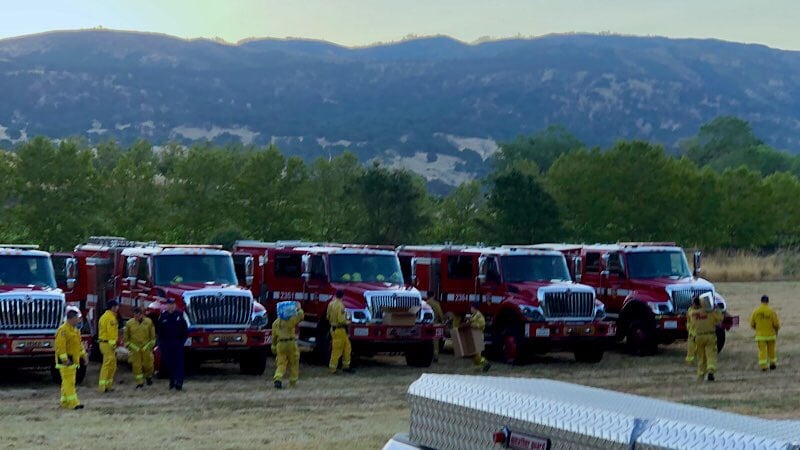 UPDATE 8/13/12 9:20 p.m. — Firefighters have achieved 65% containment on the Moose Fire, and the fire remains at 225 acres, where its held steady since the early morning of Tuesday. According to Cal Fire’s evening update 446 personnel are making “steady progress” on the fire, despite the high temperatures. There were 22 hand crews and engines, one water tender, two helicopters, and nine water tenders on the scene today.

Two minor injuries to firefighter were reported today, bringing the total to three on this fire. The full report from Wednesday morning can be found below.


ORIGINAL
MENDOCINO Co., 8/14/19 — Fire fighters continue to make progress on the Moose Fire, which began Monday and quickly ballooned up to 225 acres. The fire now stands at 225 acres and is 45% contained and has not expanded beyond its boundaries since yesterday morning.

However, firefighters are working hard to expand these thinner lines into what they consider a full containment line — a 200 ft fire break, often with hose line, that ensures the remaining slowly burning areas and smoldering embers won’t flare up into a new fire which has any chance of expanding.

No structures were destroyed by the fire, and only one minor injury to a firefighter is reported. All evacuation orders and warnings were lifted yesterday evening, and no warnings or orders remain in effect.

Today’s weather is not expected to help firefighters hiking up and down extremely steep hills, with temperatures expected to hit 105 degrees, and a moderate winds expected. But there remain 446 personnel on the fire, and various aircraft avaliable to help.

Here is Cal Fire’s fact sheet from this morning:

And here is our reporting from yesterday:

Here is a high resolution map of the fire and area as it stood on the morning of the second day. It has not expanded beyond these initial boundaries.