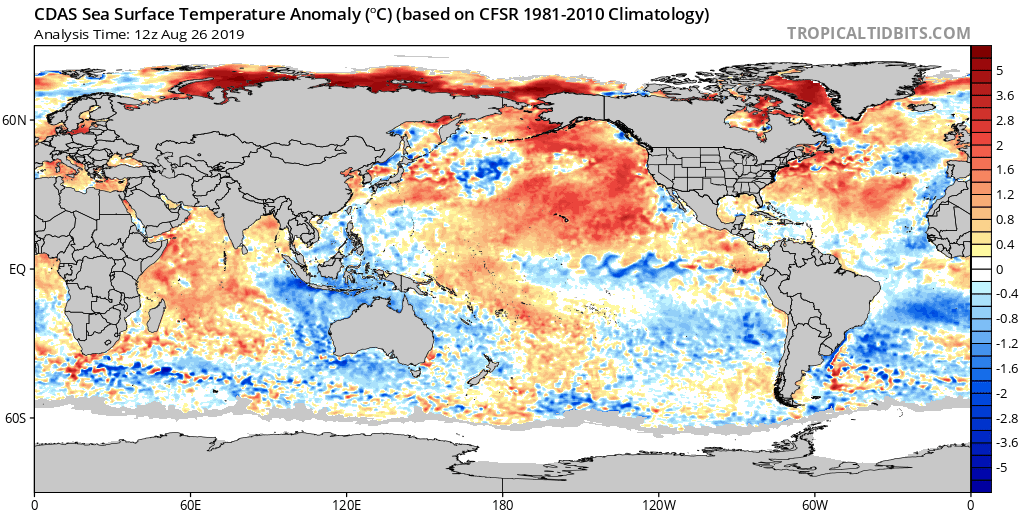 MENDOCINO Co., 8/27/19 — It’s hot out there, though you definitely didn’t need us to tell you that. What you might be more interested to hear is that’s it is predicted to cool down somewhat later this week, though it will likely remain hotter than average, possibly well into the early fall. There is a red flag warning, that is a warning of elevated fire risk, along the Oregon border and in the eastern portion of NorCal, but at the moment no warning in Mendocino County.

Temperatures were extremely high today, hitting around 104 in Ukiah though temperatures are expected to drop a bit tomorrow. There’s also still some potential for thunderstorms across Northern California, but mostly in the mountains to the east, from this afternoon into tomorrow. There is some chance of rain, but it could also be dry lightening with the potential for fires. This is undoubtedly contributing to the deceleration of a red flag warning:

In the more long term forecast, an oceanographic phenomenon dubbed the North Pacific Blob,” appears to have made a comeback, which very likely means warmer than average temps into the fall, and could potentially also mean a drier than average fall, though that is far less certain.

The Blob is an area of ocean a few hundred miles off the coast of British Columbia, Washington, Oregon and NorCal, with unusually elevated surface temperatures. This phenomenon was first noticed a few years ago, and is linked to a ridge of warmer high pressure air that basically blocked winter storms. This phenomenon was at least partially responsible for part of the drought and a late start to the winter rains in recent years.

From the Weather West Blog, an excellent source for weather analysis:

Update on the “Return of the [Warm] Blob” in the North Pacific: it’s still there. A very broad region of highly anomalous ocean surface warmth persists, as it has for at least the past 4-6 weeks. Seasonal models continue to suggest this anomalous warmth will continue for at least the next month or so before slowly moderating. For California, this likely means a continued likelihood of above average temperatures for much of the autumn and perhaps a slightly increased likelihood of ridging along the West Coast. While it may slightly tilt the odds in favor of below-average precipitation this autumn, the precipitation signal really isn’t all that strong and things could still go either way (as opposed to the warm temperature signal, which is strong indeed).

For those of you interested in a more in-depth analysis, here’s that link: