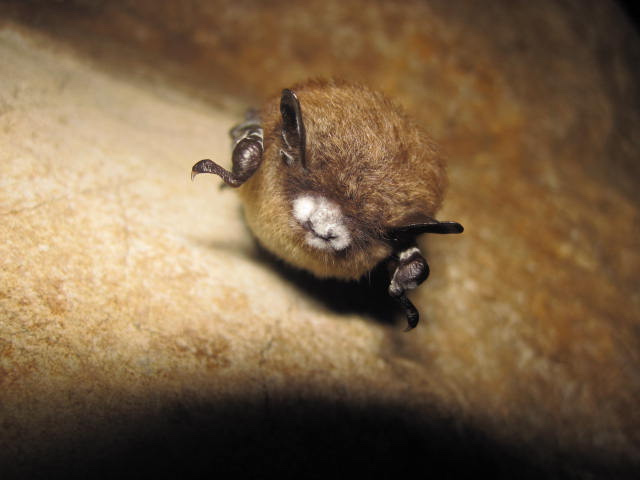 MENDOCINO Co., 7/8/19 — A deadly fungus that causes “White-nose Syndrome” has been killing millions of bats on the east coast and around the country over the past decade, but it has recently been detected for the first time in California, the California Department of Fish and Wildlife announced recently. The fungus has caused major die-offs in bat colonies across the country, and spores can be easily spread from one location to the next.

People can assist with surveillance by reporting unusual behavior they see in bats. The announcement notes, “Sick or dying bats observed during winter in the colder regions of the state should be reported to CDFW at this link.

The CDFW also requests that people who are entering caves take care to decontanimate afterwards and not transfer clothing and gear from one site to the next to avoid spreading the fungus.

Here’s the full announcement from CDFW:

Deadly Bat Fungus Detected in California
Posted: 05 Jul 2019 08:58 AM PDT
The fungus that causes White-nose Syndrome (WNS), a deadly disease of bats, has been detected in low levels in California for the first time. Fungal DNA of Pseudogymnoascus destructans (Pd) was detected in samples collected this spring from bats on private land in the Plumas County town of Chester. The California Department of Fish and Wildlife (CDFW) and U.S. Fish and Wildlife Service (FWS) have been preparing for possible detection of the fungus with partner organizations since 2009. While there is currently no indication the disease itself is affecting bat populations in California, the lab tests suggest Pd is here.
WNS awakens bats during hibernation, causing them to use energy reserves needed to survive winter, when insects they rely upon for food are not available. The fungus was first detected in New York in 2006 and spread incrementally. Bats that have contracted the disease have now been confirmed in 33 states and seven Canadian provinces. Including the recent California discovery, the fungus alone has now been detected in a total of five states.
WNS has killed millions of bats in the U.S., including more than 90 percent of the bats in some hibernation colonies. Since bats usually produce only one offspring per year, it could take decades for some populations to recover from a major die-off.
“WNS is considered one of the deadliest wildlife diseases, having killed over six million North American bats since it was discovered,” said CDFW Wildlife Veterinarian and Epidemiologist Dr. Deana Clifford. “WNS doesn’t affect human health or pets, but the ecological impacts of bat die-offs may indirectly impact agricultural systems through loss of the natural pesticide effect and nutrient cycling of bats.”
Until spring 2016, the westernmost occurrence of Pd was in eastern Nebraska. In March of that year WNS was confirmed in Washington State—1,300 miles west of the nearest known location of the fungus. How it got there is unknown; Pd spreads through physical contact with an infected bat or Pd in the environment. Because spores are persistent, people can also spread the fungus from infected areas to non-infected areas on their shoes, clothes or gear.
Surveillance for WNS has been supported by a national program administered by the U.S. Geological Survey (USGS) National Wildlife Health Center in Wisconsin in collaboration with FWS, Northern Arizona University (NAU), and Bat Conservation International (BCI). CDFW has worked with the National Park Service Klamath Network (NPS KLMN) and others to collect swab samples from bats around California since 2016. The samples tested for the DNA signature of Pd were negative until 2018, when one sample from a little brown bat maternity colony in Chester suggested the fungus may be present at low levels. In 2019, the same site and another in Chester yielded three bats with similar low-level detections.
Dr. Alice Chung-MacCoubrey of the NPS KLMN, who led the surveillance work at Chester and several other northern California sites, said, “The detection of Pd at Chester, even at these low levels, is troubling. It has now been detected in two successive years at two different sites and with testing by both the NWHC lab and the NAU lab. In other parts of North America affected by WNS, low-level Pd detections preceded detection of the disease itself by one to four years.”
“Detection of Pd at the levels reported in Chester are possible thanks to advanced tools and surveillance networks in place today that we did not have in the years right after WNS was discovered,” said Jeremy Coleman, National White-nose Syndrome coordinator for the FWS, which leads the national response to the disease. “These very early indications that Pd is present allow for a more proactive response by local partners than what has been possible before. Just how long we’ll have before WNS emerges in California’s bats is a big unknown.”
CDFW leads the California WNS Steering Committee, a multi-agency scientific research group that has been monitoring WNS nationally since 2009. The Committee includes the FWS, NPS, U.S. Forest Service, USGS, BCI, California State Parks, U.S. Department of Defense and National Speleological Society (NSS). They developed a WNS response plan for California that outlines actions to be taken if the fungus or disease arrives in California.
“It is critically important for CDFW and our partners to follow up on these detections,” said CDFW Wildlife Ecologist Dr. Scott Osborn. “In the coming months and years, we will intensify surveillance for WNS, monitor impacts on bat populations, and assist with research on disease management. We hope disease treatment and prevention techniques currently in development will be available soon.”
Meanwhile, Osborn asks all Californians to be vigilant and cooperate with management actions that may be taken to slow the spread of WNS. People can assist with surveillance by reporting unusual behavior they see in bats. Sick or dying bats observed during winter in the colder regions of the state should be reported to CDFW at www.wildlife.ca.gov/
conservation/laboratories/
wildlife-investigations/monitoring/wns/report.
According to Osborn, caving organizations like the NSS have helped collect important information about California’s underground bat roosts. People who enter caves and mines should follow decontamination protocols at www.whitenosesyndrome.org/
static-page/decontamination-information, and do not transfer clothing or gear between certain sites.
Details about WNS and Pd are at www.whitenosesyndrome.org.
For photos and B-roll video, visit the White-nose Syndrome National Response Team newsroom at www.whitenosesyndrome.org/static-page/news.
Information about bat conservation is available at www.batcon.org.