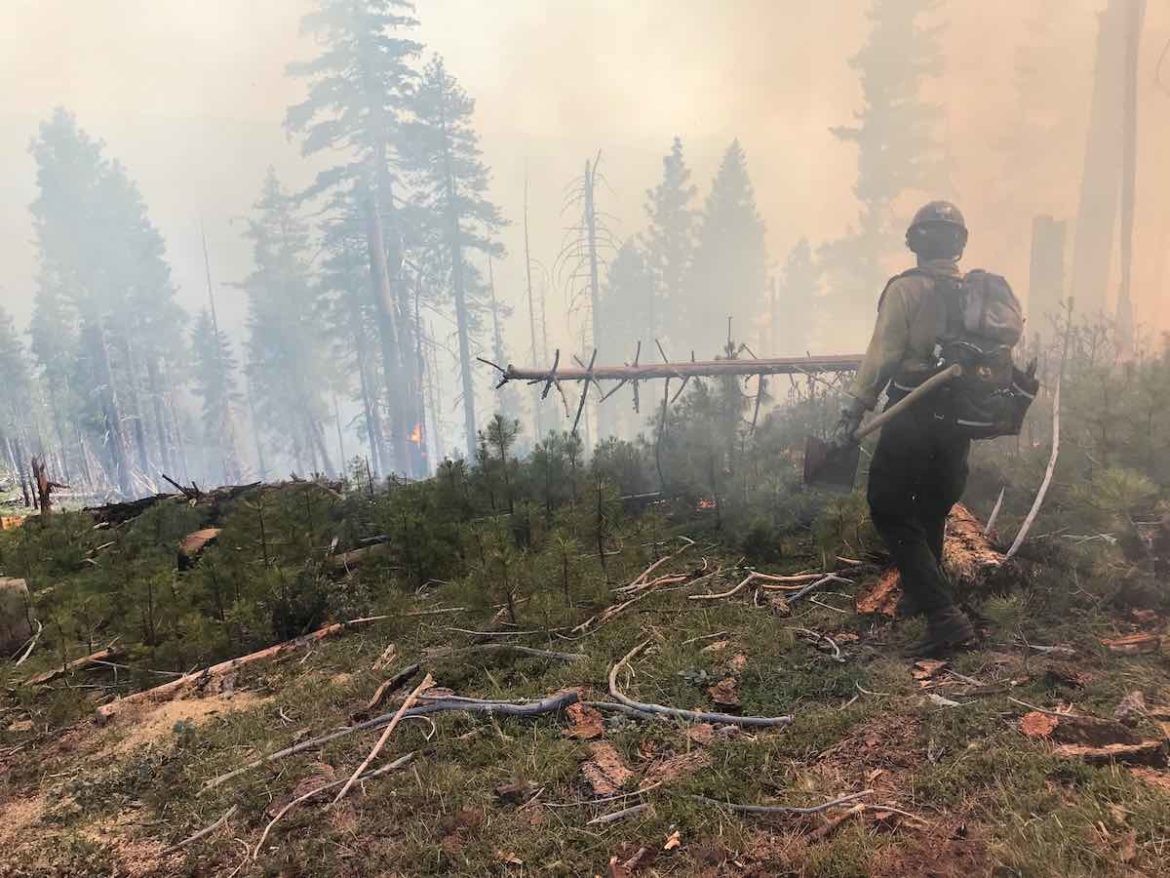 MENDOCINO Co, 6/23/19 — The East Fire, which began nearly a week ago after lightning strikes in the Yolla Bolly wilderness, is now estimated at 378 acres, up from 325 on Saturday, with five percent containment — the first containment data released in the last several days. The Haynes Fire, which began similarly, is now at 99% containment and is 23 acres in size. Here’s our previous coverage of the two fires.

A containment area of 1,200 acres has been established for the East Fire, within which the East Fire is being managed as it grows southward, and USFS managers have said they plan to use the fire to help clear overgrown fuels and snags remaining from the 2008 Yellow Fire in the same area. According to the USFS’s incident page, the current strategy is “reinforcing the northern boundary of the confinement area, taking the fire to the Eel River.”

120 personnel are on the scene, down from 145 on Saturday, with firefighters and supplies primarily brought in by helicopter due the the remote wilderness location of the fires. Crews will remain at the Haynes Fire to insure that that fire does not become more active now that nearly full containment has been established.

Here’s the most recent map provided by the USFS of the two incidents:

In a press release Saturday, the management strategy was described as such: Incident Commander Trainee Terry Nickerson commented after Friday’s helicopter flight, “We observed low to moderate activity on the fire which is helping reduce snags and debris in the wilderness in a natural way. We feel this is a great opportunity to manage this incident, at this time and in this location to improve forest health and reduce exposure and risk to fire personnel.” Nickerson added, “The fire is burning exactly as we want it to.”

More photos of the firefighting efforts are being posted on the USFS’s Mendocino National Forest Facebook page.

There are 120 personnel working on the two fires including smokejumpers, Hotshot crews, wildland fire modules, EMTs, helicopters and support personnel. Some of these support personnel are managing the logistics involved with keeping the crews well fed and supplied deep in the Yolla Bolly Wilderness. Every day, logistics personnel pick up and transport supplies, pack containers, prepare materials and food for delivery and importantly, arrange for all of the trash and empty containers to be hauled out of the wilderness. Fire crews cannot operate efficiently on an incident without this critical logistical support.

The weather for Sunday will be clear with 6 to 11 mph northeast winds shifting to the northwest in the afternoon and temperatures in the mid to high-70s. There is a cooling trend forecast for early next week.

Wilderness hikers are asked to avoid travel near Buck Ridge and Wrights Ridge. Maps and photos are available at https://inciweb.nwcg.gov/incident/6394/. Photos are also available here: https://www.flickr.com/photos/mendocinonf/albums.