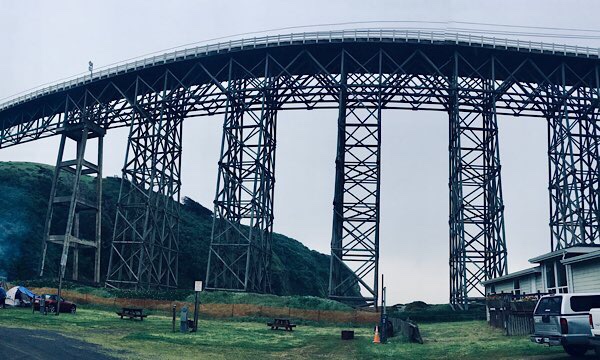 MENDOCINO Co., 6/5/19 — After 75 years, and achieving a place on the National Historic Register, the nearly 1,000 foot wooden Albion River Bridge remains the shortest and sturdiest highway crossing over the Albion River, and possibly the longest timber trestle bridge in use in the country. The bridge has been recognized as historic by both the state and federal governments, attracted the attention of CalTrans project managers and the New York Times, and now will be the center of a birthday celebration organized by the Albion Bridge Stewards.

Here’s the full press release from the Albion Bridge Stewards, who are hosting the celebration. You can join them on Sunday, June 9 from 12:30 to 3:30 p.m. at the Albion River Inn.

This month marks the 75th anniversary of  the Albion River Bridge safely connecting the world to the Mendocino coast. This iconic bridge — listed on both the National Register of Historic Places and the California Register of Historical Resources — is almost 1,000 feet long, making it possibly the longest timber trestle highway bridge still in use across the country. Although it was completed during World War II, leading engineers specializing in these unique bridges have concluded that the Albion River Bridge is safe, and can remain so for another 75 years with proper repairs and maintenance.

A group of community residents, businesses, and neighbors has organized to preserve this national treasure. The Albion Bridge Stewards’ focus is to encourage Caltrans to carry out regularly scheduled repair and maintenance to keep the Albion River Bridge in safe operating order.  Additionally, they are challenging efforts by Caltrans to replace it with a generic concrete structure at great financial cost to California taxpayers, and with major irreversible impacts to the human and natural environments.

For months the Stewards have been urging Caltrans to put back the Albion River Bridge signage at both the north and south entrances to the bridge  that they knocked down last year during soil testing for new bridge construction, with no acknowledgment or results.  Just recently, however, Caltrans responded to the Stewards’ urging by installing the replacement signs in time for the bridge’s upcoming anniversary.

“We’re pleased that Caltrans, an often intractable state agency, responded in time for us to celebrate our beautiful bridge!”, said Bill Heil, the group’s President.

On Sunday, June 9, the Albion Bridge Stewards are hosting a 75th anniversary celebration at the Albion River Inn from 12:30 to 3:30 p.m. The public is invited to attend this afternoon for a little history, a little music, and lots of celebrating  in recognition of the Albion River Bridge’s service — past and future — to Mendocino coast residents and visitors.