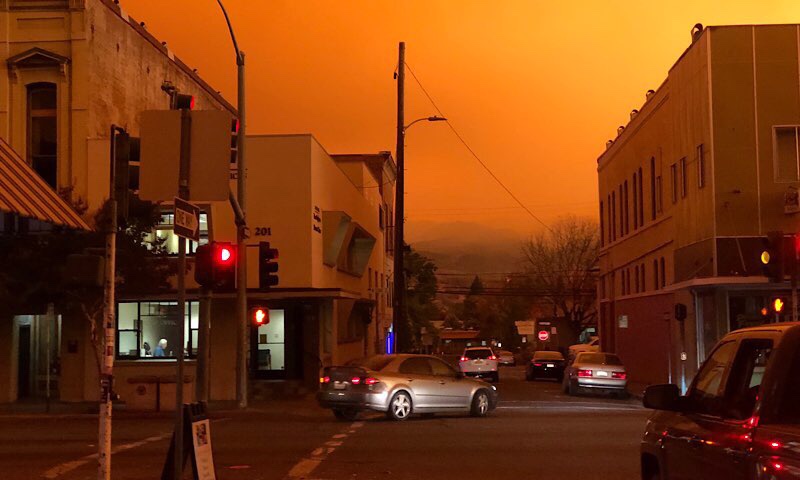 Smoke from the Camp Fire in Butte County, obscuring the eastern hills of the Ukiah Valley, and casting a pall over downtown Ukiah.

MENDOCINO Co., 6/4/19 — The State of California has devised a set of guidelines for student outdoor activity levels and when to move activities indoors in the case of adverse air quality, including conditions caused by wildfires. These guidelines come after the severe fires of the past few years, which resulted in closed schools throughout Mendocino County, hazardous air quality levels in Ukiah briefly being the worst in the continental United States, and widespread ongoing impacts from wildfire smoke throughout the state. During these events there was often confusion about whether to close schools or leave them open, and as to whether children should be allowed to exercise and play outside.

In response to these questions an effort was spearheaded by the North Coast’s own Senator Mike McGuire to devise a statewide set of standard guidelines. At a press conference in Sacramento today McGuire and state staff announced the guidelines as part of the “Get Smart about Wildfire Smoke: Clear Guidelines for California Schools.”

A statement from McGuire’s office notes that school administrators have been requesting clear public health guidelines, and that the legislator has worked with experts from a number of different California environmental health and public safety agencies to develop the new recommendations.

Broadly, the guidelines recommend that schools reduce the amount of time children spend outside, and the amount of exertion, as the air quality worsens, with no strenuous activity allowed outside during “level 5” conditions. During the fires last year the question of whether to close schools was broached, and remains a complicated one. Many schools are equipped with heating and cooling systems that scrub particulates out of the air and may thus be, in theory, a safer environment than the home during a wildfire, something pointed out during the blazes. However, the fact that children have to travel to reach school, and that many California schools have outdoor lunch areas with children only inside while actually in class, means that finding a one-size-fits-all solution has been tricky.

The new guidelines are intended to enable local officials to create “data-driven standards” and establish local protocols for school closures when wildfire smoke becomes hazardous. They are also meant to facilitate better collaboration between school districts and local air quality districts and agencies. Officials said the guidelines would provide a template to assess when particulates from smoke may result in health impacts to students, and would be distributed to every California school district by the beginning of the upcoming school year.

In Mendocino County, new wildfire smoke standards for local schools were issued by the Mendocino County Office of Education in November, 2018, after weeks of ongoing poor air quality due to thick smoke from both the Mendocino Complex fires and smoke traveling from other blazes such as the Camp Fire.

The press conference announcing the new “Get Smart about Wildfire Smoke” guidelines took place at 11 a.m. today in Sacramento. At the conference McGuire remarked that over the last decade, California has seen some of the largest and most destructive fires in United States history, resulting in smoke blanketing communities hundreds of miles from the original blaze for many days on end. He added that the new guidelines have been developed “just in time” for the upcoming fire season.

“The bottom line for us is, we want kids in schools, and we want them there safely,” said Mike Walsh from the Butte County Board of Education during the event.

The guidelines also provide recommendations about how to protect students from suffering impacts from unhealthy air quality, including tips for students who already have conditions such as asthma which may leave them more vulnerable to smoke events. Officials noted that reducing strenuous activity and staying indoors is one way students can reduce symptoms from wildfire smoke. McGuire added that ultimately it will be up to the parents to decide when it is safe to send their children to school, and that the guidelines should facilitate a local conversation about what protocols are appropriate. He emphasized that the unprecedented intensity of recent fires indicated there are likely to be ongoing smoke events in future fire seasons.

You can watch the full proceedings here.

Here’s more tips about how to protect yourself from wildfire smoke and how to build an affordable home air-purifier.