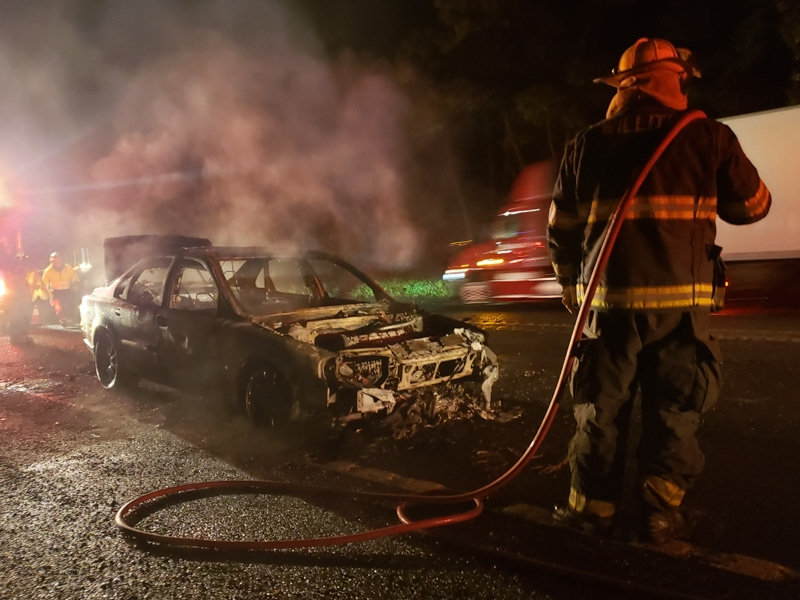 A firefighter from the Little Lake District hoses down a car on U.S. Route 101 - Josh Bowers

UPDATE 5/21/19 — The fire, late last night, which consumed what appeared to be a Volvo sedan, was controlled and put out quickly thanks to the fast work of the Little Lake Fire Department. Duty Officer Eric Alvarez noted that most, if not all, of the firefighters in the volunteer department had been in bed when the call went out, and had nonetheless made it up the 101, to the scene in minutes. The vehicle was a sedan pulled over on the side of the road, with no occupants, that was fully engulfed in fire by the time firefighters arrived. Eight firefighters and two engines from Little Lake responded to the call, and traffic was stopped in both directions for about half an hour, with the California Highway Patrol assisting in traffic control.

In the light rain, and with wet brush around it, it appears that there was not much chance of the fire spreading.

WILLITS, 5/20/19 — A passenger vehicle has caught fire and is now fully engulfed in flames in the number two southbound lane of Highway 101 north of Willits, just north of the Sleepy Hollow RV park. Traffic is currently stopped going southbound and the California Highway Patrol and local fire fighters are on the scene. Traffic may be impacted in both directions.

The fire appears to be the result of fireworks igniting that stored in the vehicle, according to the CHP log. This is an evolving situation based on immediate reports and this article will be updated when more information is available.