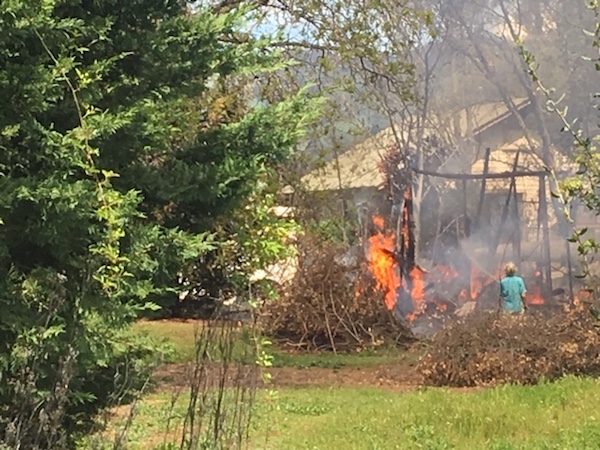 MENDOCINO Co., 4/19/19 — Temperatures have been on the rise in Mendocino County this week, with more people out and about — and that can mean greater potential for fire hazards. A number of small fires have broken out around the county in the last several days, including a small structure fire at the Coyote Valley Casino, which was briefly evacuated, a tractor trailer sparking near Ridgewood grade, and a burn pile gone out of control in Redwood Valley today, which was quickly contained.

All of the small fires have been contained quickly thanks to a rapid response by local volunteer departments and CalFire, which will be staffing up over the next few weeks in preparation for summer fire weather, according to CalFire Mendocino’s public information officer Tricia Austin.

In Redwood Valley today, a burn pile at a property on Road E, spread into an outbuilding, reportedly a shed, before being contained by the Redwood Valley Community Fire Department. Readers reported flames reaching 15 to 20 feet in height before the, “flames quickly were knocked down due to quick and efficient work by RVCFD,” said an eyewitness from the Redwood Valley Municipal Advisory Council. Crews are mopping up the scene as of 2 p.m., according to scanner traffic.

CalFire is also beginning work on two emergency fuel reduction projects in Ukiah and Willits which were authorized by Governor Gavin Newsom’s emergency declaration due to wildfires, in March.

The Mendocino County CalFire fuel break projects were two of 35 projects prioritized under Newsom’s emergency order, and will reduce fuels, create fuel breaks, and improve emergency access around Willits and Ukiah. The Ukiah project is already underway, and the Willits project is scheduled to begin soon, said Austin. More details about those projects are in the press release included below, and The Mendocino Voice will be following up as they get underway.

Austin noted that now is also a good time for homeowners to assess whether they have cleared enough defensible space around their homes and properties, which can include cutting back vegetation and brush. You can still apply for a burn permit from the Mendocino Air Quality Control Board, but make sure you follow the permit requirements. More information about CalFire’s defensible space recommendations and tips can be found at the “Ready for Wildfire” website.