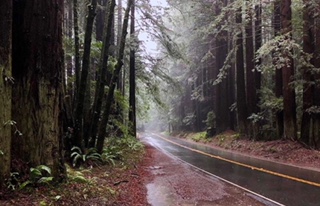 NORTH COAST, 4/24/19 — Exciting science news yesterday from the University of California, Davis, John Hopkins University and Save the Redwood: the genome of both the Coast Redwood and the Sequoia have been fully sequenced, with the Coast Redwood being the second longest genome ever sequence (after the Axolotl), coming in at a whooping 27 billion base pairs, or nine times longer than our own succinct 3 billion base pairs. A base-pair is effectively the alphabet of DNA, the blueprint of life.

Anyhow, it’s pretty big scientific accomplishment that will help with conservation efforts on the North Coast, by allowing scientists to understand the level of genetic diversity in a given section of forest, and act to increase diversity, thereby giving the species a better chance to thrive in the future.

Here is the press release from Save the Redwoods with more info:

San Francisco (April 23, 2019) — Save the Redwoods League, University of California, Davis, and Johns Hopkins University have successfully sequenced the coast redwood and giant sequoia genomes, reaching the first major milestone of a five-year project to develop the tools to study these forests’ genomic diversity. The coast redwood genome is now the second largest ever sequenced at nearly 9 times the size of the human genome. The genome of the giant sequoia is roughly 3 times that of the human genome.

Over the last 150 years, 95 percent of the ancient coast redwood range and about one-third of the giant sequoia range have been logged. With this unprecedented loss of old trees and the addition of redwood clones often planted in their place, conservationists have grown concerned that the forests’ genomic diversity has fundamentally changed, which could leave the redwoods vulnerable to drought, fire and other stressors related to climate change.

“When we celebrated the League’s 100th anniversary last year, we reaffirmed our commitment to restore entire landscapes of young, recovering redwood forests,” said Sam Hodder, president and CEO of Save the Redwoods League. “Sequencing the coast redwood and giant sequoia genomes for the first time opens a new scientific frontier for our restoration projects. This work will reveal the forests’ genetic identity so that we can protect the diversity that’s left, and in some areas, restore what was lost.”

“Our goal is to provide Save the Redwoods League and forest resource managers modern genomic tools to assist with the restoration of the redwood forest,” said Dr. David Neale, professor in the Department of Plant Sciences at the University of California, Davis. “Completing the sequences of the coast redwood and giant sequoia genomes is the first step and the foundation upon which everything gets built. In the next phase of our research, we’ll begin to uncover the amount of genetic variation that exists in redwood populations and associate that variation to the environments to which they’re adapted.”

“We pushed the boundaries of genome sequencing technology to take on the redwood and sequoia mega-genomes,” said Dr. Steven Salzberg, professor of Biomedical Engineering at Johns Hopkins University. “After using our specially developed algorithms to assemble these enormous and complex genome sequences, we have gained a new appreciation for how difficult it is to put together a hexaploid genome, especially one as large as the coast redwood’s.”

Full sequencing of conifer genomes has only been possible in the last decade.

What’s Next Now that the Sequences Are Complete

The redwood genome project was launched in late 2017, with a projected five-year timeline. By the end of the project, the genome sequences and the screening tools developed will allow field crews to quickly assess adaptive genomic diversity in redwood forests to inform management plans that restore the health and resilience of these forests throughout their natural ranges. With the genomes sequenced, the League will work to inventory diversity across the landscapes and identify “hot spots” of genomic diversity for enhanced protection and areas of low diversity for restoration.

“Every time we plant a seedling or thin a redwood stand to reduce fuel loads or accelerate growth, we potentially affect the genomic diversity of the forest,” said Dr. Emily Burns, director of science for Save the Redwoods League. “With the new genome tools we’re developing now, we will soon be able to see the hidden genomic diversity in the forest for the first time and design local conservation strategies that promote natural genomic diversity. This is a gift of resilience we can give our iconic redwood forests for the future.”

The researchers have made the coast redwood and giant sequoia sequence data available to the scientific community at large through the UC Davis website at https://nealelab.ucdavis.edu/redwood-genome-project-rgp/. During the next stage of the project, researchers will create a database capturing range-wide genomic variation within each species; develop genotyping tools that will allow resource managers to identify coast redwood and giant sequoia genetic variation while in the field; compile forest genetic inventories; and launch pilot restoration projects based on the accrued data.

As a nonprofit public benefit organization, Save the Redwoods League partners with generous members and supporters to fund our work. A significant lead gift to fund the initial sequencing of the genomes was provided by Ralph Eschenbach and Carol Joy Provan. The League is continuing to raise philanthropic funds to support the next phases of this study. To support this groundbreaking initiative, please visit the League’s website at SaveTheRedwoods.org/Genome.