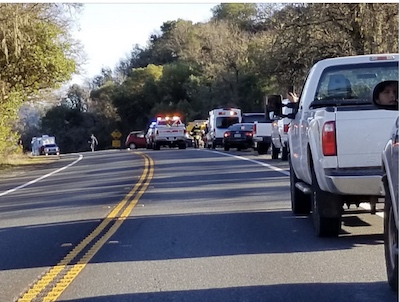 UPDATE 1/2/19 — The CHP has released more information about the collision.

UPDATE 3:45 p.m. — The CHP has confirmed that Hwy. 101 has been reopened and traffic is flowing in both directions. The highway had been closed due to a wreck. Except some traffic and delays for some time, as debris are cleared and the bottleneck the eases.

MENDOCINO Co., 12/31/18 — Highway 101 is currently closed in both directions south of Hopland due to a collision that occurred around 2:30 p.m. in the northbound lane, at the intersection with La Franchi Road, between Real Goods and Old River Road. The road is entirely closed while emergency vehicles respond to the collision and the road is cleared, but traffic is backed up significantly, and tow trucks are having difficulty accessing the scene, according to the California Highway Patrol current incident log.

Traffic is being rerouted onto Old River Road and Highway 175 while emergency responders and tow vehicles work to re-open the road. Drivers should avoid the area if possible as traffic is backed up in both directions.

The collision appears to have initially involved a red Nissan sedan, a black Dodge or Acura, and a red Honda Accord, according to the CHP log, but that has not been confirmed.