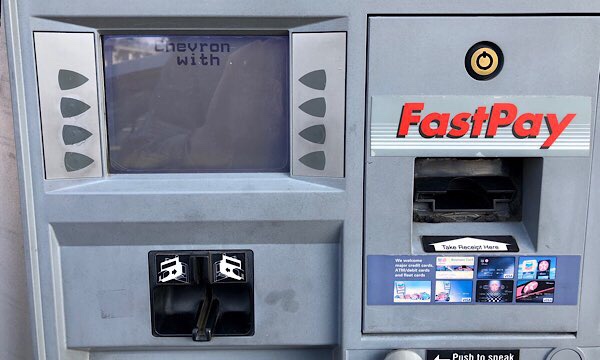 A generic credit card reader on a gas pump -- not the skimmer in question.

UPDATE, 11/19/18 — Captain Greg Van Patten, of the MCSO, has clarified a few things in an email this morning. According to Van Patten, both gas stations in Hopland had skimmers installed, and this was unknown to the owners of the gas stations.

Additionally, the pumps were pumping the correct amount of gas, but several people in the area did in fact have their credit card information stolen by these skimmers.

The MCSO advises people who have used these pumps to check their accounts for unexpected charges etc.

According to a press release from the MCSO, the skimmers would not have been visible to customers, and there have been several unconfirmed reports of identity theft stemming from this scam. And the MCSO urges anyone who suspects they may have been scammed to come forward:

If you believe you are the victim of identity theft or fraud stemming from your purchase at a local gas station please contact your financial institution and local law enforcement agency to document the loss.

According to the MCSO, at one gas station five of the eight pumps had had their “locking mechanisms defeated indicating someone had accessed the interior components of the gas pump,” and four machines had skimmers. This prompted authorities to inspect the other gas stations in town, where they found three more skimmers, for a total of seven skimmers in Hopland.

The skimmers were removed.

Given that we are aware of only two gas stations in Hopland, it seems fair to assume that both stations had had their pumps compromised.

We have been unable to contact the owner or a manager of either gas station in Hopland for comment.

Synopsis:
On November 16th, 2018, at about 11:30 am, Mendocino County Sheriff’s deputies were requested to respond to Hopland, CA for the reported discovery of a suspected “credit card skimmer” (scanning device) inside a gas station pump.  The deputy met with a Mendocino County Agriculture Department representative who had responded following a report regarding potential identify theft stemming from a purchase of gas from that specific gas station.

The identify theft victim identified unauthorized charges to their credit card account following their use of the card at the gas station and suspected their credit card information and pin were stolen.  The deputy along with the Mendocino County Agriculture Weights and Measures representative then proceeded to investigate all the gas pumps at the location.  In total, five of eight pumps were identified as having the locking mechanisms defeated indicating someone had accessed the interior components of the gas pump.  Only four gas pumps were identified with scanning devices.  All four (4) scanning devices were removed and collected as evidence in this investigation.

There are unconfirmed reports multiple victims have been affected by these devices.  If you believe you are the victim of identity theft or fraud stemming from your purchase at a local gas station please contact your financial institution and local law enforcement agency to document the loss.

Based on the location of the devices recovered they were not readily recognizable and would not be visible to the consumer during the transaction.  However, consumers should always consider inspecting any credit or debit card machine for loose or cleaner than usual parts indicating someone has tampered with the device.  Additionally, inspect locking mechanisms located on gas pump panels which contain the card reader and pin pad.  Evidence of forced entry at the identified gas station pumps was present and readily apparent after closer inspection.

Anyone with information concerning the unauthorized access and installation of the recovered credit card scanning devices from Hopland, CA  is asked to contact the Mendocino County Sheriff’s Office tip-line at 707-234-2100

A press release issued by the Mendocino County Sheriff’s Office