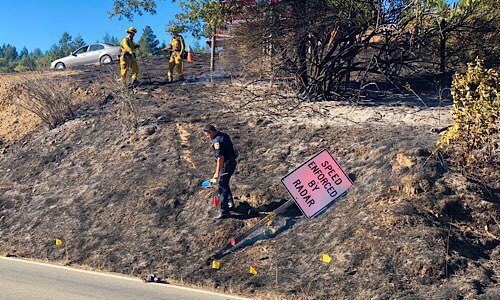 A Cal Fire prevention officer conducts an investigation into the cause of a small vegetation fire - A.F. Baumann

Scroll down for photo gallery.

UPDATE 4:10 p.m. — The small vegetation fire west of Willits, named the Pepper Incident, is now contained and mostly out, though firefighters remain on the scene mopping up and monitoring hot-spots. According to Cal Fire Battalion Chief David Diggs, who was on the scene, the fire grew to about 1.5 acres and was called in at 2:26 p.m., with full containment occurring at 3:05 p.m.

As of about 3:50 p.m. one way traffic-control remains on Hwy. 20, and you can expect very small delays. Little Lake Fire and Cal Fire responded, as did a hand-crew from Chamberlain Creek, and the CHP and CalTrans. The fire began near the road, on the north side of Hwy. 20 near the intersection with Pepperwood Way, about a mile west of Main St. The cause of the fire is under investigation and Cal Fire prevention officer was on the scene conducting the investigation.

Chief Diggs cautioned that, though there has been some rain this year, we are still in the midst of fire season, vegetation remains exceedingly dry and conditions are still ripe for wildfires. He also urged people to maintain defensible space around their houses. (Scroll down for more info and the original reporting.)

UPDATE 3:00 p.m. — The fire is coming under control and is has been sufficiently controlled that resources and aircraft have been recalled. No official word on containment, but from Hwy. 20 no substantial flames are visible and the scene looks calm. Hwy. 20 remains open, and it does not appear that any structures were damaged.

The fire burned only about a third of mile west of where Coast Rd. intersects with Hwy. 20, right near Pepperwood Way. It appears to have started on the highway, or shoulder, and to have traveled up the hill from there, burning between one and two acres of grass and a little brush.

Copters and tankers have been recalled, after making several drops and putting down heavy retardant lines.

If you are driving on the 20 west of Willits exercise caution as many firefighters and engines remain in the road actively working on hotspots.

UPDATE 2:50 p.m. — The fire is being called the Pepper Incident and is now one and a half acres, and 50% contained. One structure at the top of a hill is being threatened. There is a heavy air attack underway.

The fire is apparently only about a mile west of Willits, and is being hit by by several aircraft including tankers. No word on containment yet, though the fire does not appear to have a rapid rate of spread.