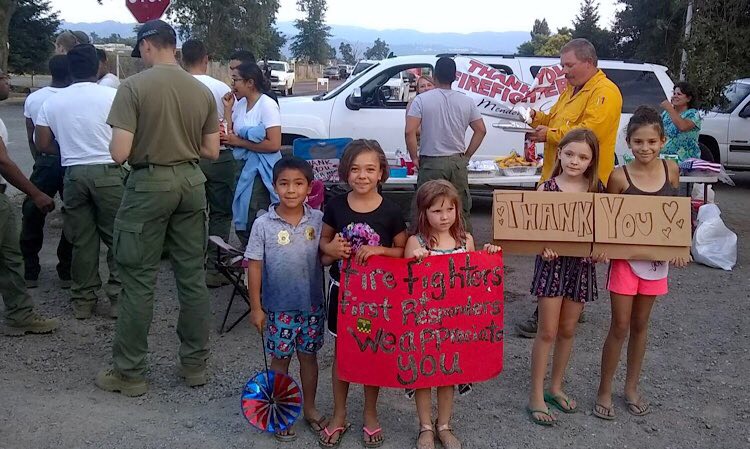 Children thank firefighters in front of Hopper's Corner in Potter Valley. These firefighters have been fighting the Ranch Fire.

MENDOCINO CO., 9/20/18 — It took almost two months but the largest wildfire in recorded California history is now completely contained, and the process of repairing and mitigating the scarred landscape has begun. The United States Forest Service announced yesterday that containment on the Ranch Fire had reached 100%, after lingering in the high 90s for weeks. Parts of the forest within the containment lines are expected to smolder and burn until the rains arrive, meaning it could be weeks more that small plumes and wisps of smoke will be visible from the forest. 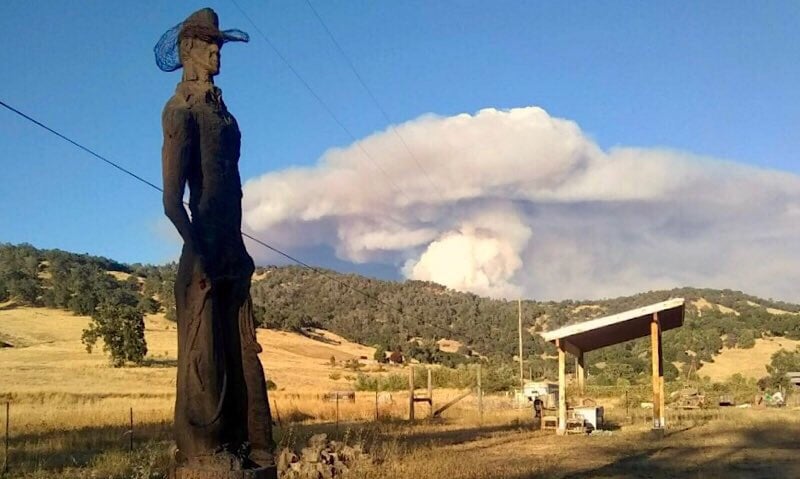 A smoke plume rises from the Ranch Fire, at about 7 p.m. on Aug. 5., facing west from Potter Valley.

The Ranch Fire was part of the Mendocino Complex which also included the River Fire. Both fires started within about an hour of each other and about 10 miles apart, on the afternoon of July 27 — 56 days ago. From tiny sparks, likely accidents in both cases, the fires erupted and grew in size ferociously, and because they were so close together (at one point coming within about two miles of each other) they were fought through a unified command.

And though major firefighting operations had ended by late August, the official and total containment of the fire, in incredibly rugged and remote parts of the Mendocino National Forest, has taken till now to complete. The fire has not grown in those many weeks, but the final numbers for the largest fire in our state’s history, and the largest fire in the United States this year, bear repeating:

The Ranch Fire grew to 410,203 acres and was fully contained on Sept. 18; the final size of the River Fire was 48,920. Combined, the fires burned 459,123 acres, killed one firefighter, seriously injured four, burned down 157 residences and 123 other buildings. The fire cost at least $200 million in fire suppression and at least another $56 million in damages, bring total cost to at least a quarter of a billion dollars, a number which could likely grow, and does not include lost economic productivity due to evacuations and road closures.

Now the work turns to rebuilding and repairing the damage. Within the national forest the United States Forest Service — which took over from CalFire once the fire was burning exclusively in the Forest — “Crews will continue to monitor fire activity and repair firelines on the Ranch Fire,” according to a press release from the USFS. The release continued, “There are 22 miles of fireline to repair. The goal is to reduce erosion and other impacts from suppression activities.”

FEMA announced that October 3 will be the deadline for Lake County (and Shasta County) residents and business owners to apply for assistance to cover property damage, although businesses will be able to apply for Economic Injury Disaster Loans till May 6, 2019. Registration for either FEMA or Small Business Administration assistance can be done in person at the Disaster Loan Outreach Center, Habematolel Pomo of Upper Lake Tribal Community Center on 9460 Main Street in Upper Lake, or on the phone, or online. The FEMA Helpline is 800-621-3362 or 800-462-7585 (TTY); the SBA at 800-659-2955. Emergency disaster resources and assistance will be available for 18 months for those who register prior to the deadline.

Here’s more information about wildfire resources and how to contribute to wildfire relief efforts. And here are various maps of the fire. 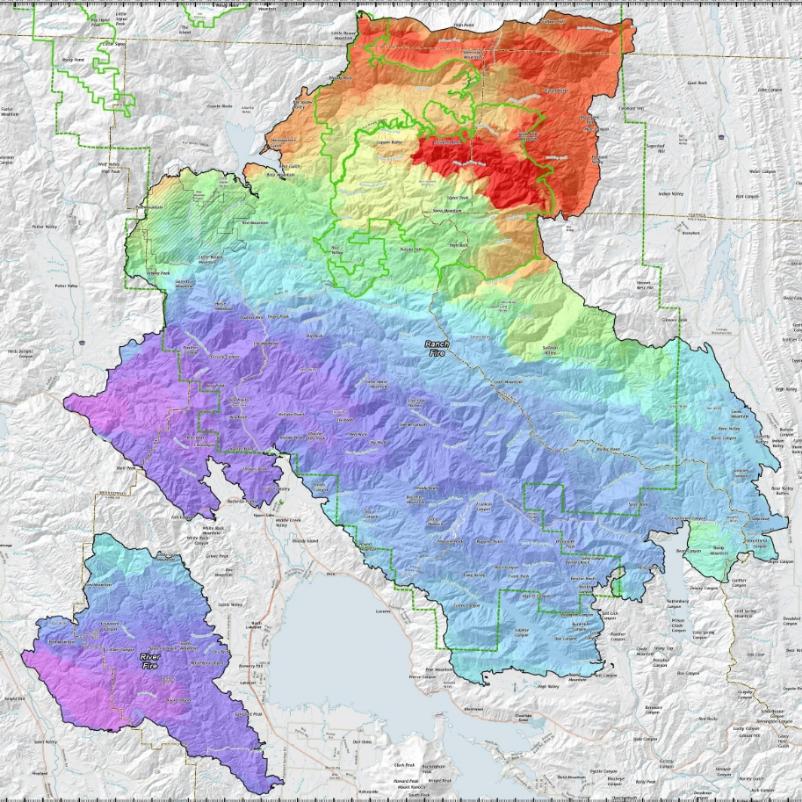 Mendocino Complex map showing the progression of the fire.

Portions of the Mendocino National Forest remain closed, and will continue to be closed as fire fighters undertake recovery efforts to ensure that the impacted forest areas are safe for the public. However, the northern portions of the forest remain open. Deer hunting season in the B-Zone opened on September 15, and will continue until October 21, but visitors are advised to use “extreme caution” as heavy equipment and fire fighting crews will be on the roads. Ranger stations will have the most current closure information, but the current closures can be found in Forest Order 08-18-15, or in this map.

Sandra Moore, spokesperson for the United States Forest Service, noted that USFS is working to re-open these areas, but that it will may take a while to address potential hazards, including “burned standing trees or snags, exposed rebar stakes, logs and rocks that may become loose, and burned-out stump holes,” Closures will remain in place until fire fighting and recovery crews are able to ensure the area is safe.

The Burned Area Emergency Response team has been conducting ongoing assessments of the forest areas, including recommendations about what needs to be addressed to protect public safety, including the potential for erosion, floods, and landslides. According to a UFSF press release, the BAER team’s initial report noted that:

“The fire burned through the entire off highway vehicle trail system, damaged trail segments, burned or compromised culverts and bridges and impacted campgrounds, day use areas, trailheads, and signage. Also, the BAER team advised forest officials that future washouts from storm events pose general and widespread threats to safety for visitors and Forest Service employees.” Ongoing assessments will include clearing hazardous trees from roadways, other road work, and increasing safety measures in camping sites and parking lots to protect future visitors to the forest.

Here’s some of our photo and video coverage of the Mendocino Complex, and our full fire season reporting can be found here.

Here is the press release announcing the containment from the USFS:

WILLOWS, Calif. — The Ranch Fire is now 100 percent contained and the River Fire is 100 percent contained. Throughout the remainder of the week, crews will continue to monitor fire activity and repair firelines on the Ranch Fire. There are 22 miles of fireline to repair. The goal is to reduce erosion and other impacts from suppression activities. The forest is doing everything possible to reasonably reduce risks to the public and reopen areas but there is still a lot of restoration work to do. Some of the hazards in the closed area include burned standing trees or snags, exposed rebar stakes, logs and rocks that may become loose, and burned-out stump holes. The repair work has to be done before areas can be reopened to the public. With the current warmer and drier weather more smoke from well within the perimeter of the fire may be visible at times.

Fire Closure Area: The Ranch Fire area is closed as described in Forest Order 08-18-15. The purpose of the closure is to provide for public safety and for the firefighters who are engaged in repair efforts within the Ranch Fire closure area. The closure area applies to all public use, including hunting, the use of firearms and off-highway vehicles. The northern half of the forest is open for outdoor activities.

The B-Zone deer hunting season opened on Saturday and continues until Sunday 10/21/18.  Forest visitors need to exercise extreme caution near the fire closure since heavy equipment and firefighting vehicles are utilizing area roads. Visitors can contact the ranger station nearest their destination for current information. For a high-resolution closure map, please use the following link: https://inciweb.nwcg.gov/incident/map/6073/0/88371