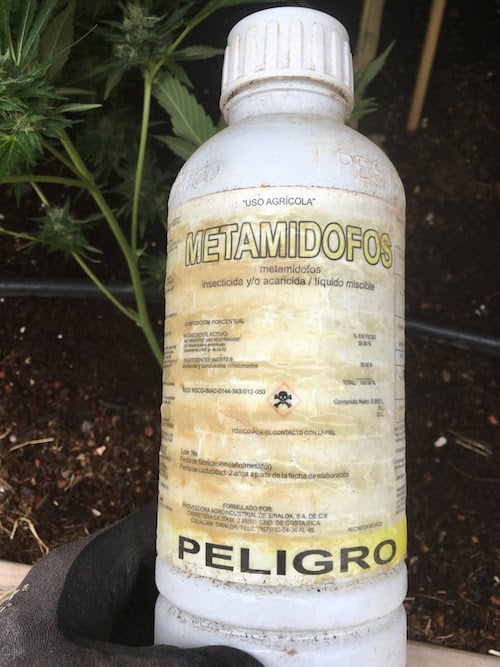 Metamidofos, the pesticide found by MCSO in the Branscomb cannabis garden

MENDOCINO Co., 7/25/18 — A Mendocino County sheriff’s deputy was made ill earlier this month when he encountered the pesticide methamidophos during a raid near Branscomb. According to Lt. Shannon Barney of the Mendocino County Sheriff’s Office, as of July 25, the deputy, “…is still being treated for the possible exposure and is currently off work. Long term condition is not yet know.” Barney could not elaborate due to privacy protections for medical conditions.

Asked for comment on these farming practices vice-chair of the California Growers Association, Casey O’Neill said, “There is no place for horrific pesticides in cultivation of a plant that is often used as medicine. The use of harmful pesticides is categorically unacceptable. Integrated pest management strategies are the appropriate methodologies for cannabis cultivation, with limited use of approved pesticides as a last resort.”

The deputy was first exposed more than 10 days ago, on Friday, July 13. On that day personel from Mendocino’s cannabis eradication unit (the County of Mendocino Marijuana Eradication Team, COMMET) along with game wardens from the California Department of Fish and Wildlife (CDFW) conducted search of a property on the 13500 block of Kenny Creek Rd. According to a press release from the MCSO they deputies were assisting in the servicing of a search warrant, the purpose which was, “…to address a marijuana growing operation that involved suspected environmental crimes. These crimes included the illegal diversion of water for the purpose of cultivating. The growing operation was also thought to be illegal and unpermitted.”

During this search a deputy was allegedly exposed to a banned pesticide, methamidophos, which can rapidly be absorbed through the skin, lungs, and stomach. Soon thereafter he began to complain of stomach symptoms and fell ill. He was treated at a local hospital and as of today is still off work, and under some treatment.

Lt. Barney explained, “One of our goals is public education, so someone does not inadvertently expose themselves to these chemicals.” He added that the MSCO recommends people seek immediate treatment if exposed.

The MCSO’s press release included a link to a fact sheet on the insecticide published by the South African company Villa Crop which still produces methamidophos.

Here’s the full press release from the MCSO:

Suspect(s): Unnamed, case is under investigation

On Friday July 13th, Deputies from the Mendocino County Sheriff’s Office Marijuana Eradication Team (C.O.M.M.E.T.) were assisting Wardens from the California Department of Fish and Wildlife with the service of a search warrant at a residence in the 13500 block of Kenny Creek Road in Branscomb. The purpose of the search warrant was to address a marijuana growing operation that involved suspected environmental crimes.  These crimes included the illegal diversion of water for the purpose of cultivating.  The growing operation was also thought to be illegal and unpermitted.

During the service of the search warrant, a Deputy Sheriff was possibly exposed to a chemical that was being used as an insecticide on the marijuana plants. The chemical has been identified as Metamidofos which is listed as a banned or severely restricted pesticide by the US Environmental Protection Agency. The pesticide is transdermal and can be absorbed through contact with the skin, or inhaled through the respiratory system.  Based upon the packaging and labeling of the bottle the pesticide appears to have been brought into the United States illegally from Mexico.

After the service of the search warrant the Deputy started to experience stomach problems and progessively worsened.  He was treated at a local area hospital in the days following his exposure and he is still under the care of a physician due his continuing symptoms that are common for exposure to this substance.

The Mendocino County Sheriff’s Office would like to caution the public and other first responders, who might come into contact with dangerous pesticides associated with marijuana cultivation, to use extreme caution as these types of chemicals are now frequently found in marijuana growing operations.  If you think you have been exposed to this substance or a similar substance, please seek medical attention as soon as possible.

Attached is a link to a material Safety Data Sheet on the substance:  http://www.villacrop.co.za/files/Metamidofos%20585%20SL_UCP_MSDS.pdf