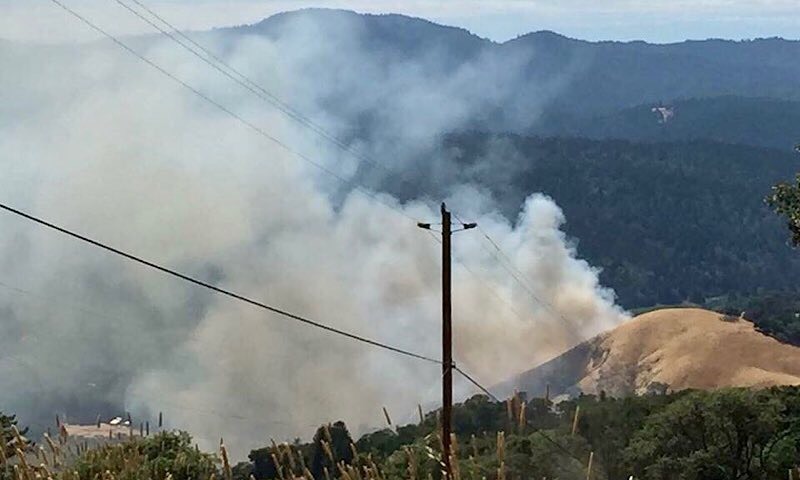 The Peach Fire near Boonville, taken at about 4:20 by a reader.

MENDOCINO Co., 7/6/18 — Firefighters continue to work on the Peach Fire, a small wildland blaze that burned about 50 acres near Boonville yesterday. According to CalFire, as of this morning the fire was about 70% contained. However, the fire has essentially stopped growing since yesterday afternoon, and a CalFire public information officer stated yesterday afternoon, that forward progress of the fire had been stopped.

It often bears repeating, in these situations, that containment is just one number, one measure, of the progress made against a fire. Containment refers to firefighters actually getting a line of hose (often accompanied by retardant drops, and breaks created by bulldozer and hand crews) around a fire. Surrounding the fire in such a way ensures the best ability to keep it contained in that place. But even after containment the fire remains hot within the contained area, and a period of mop up continues, or in the case of very large fires, allowing it to burn itself out.

So, though the containment only stands at 70%, the fact that the fire has apparently grown negligibly since yesterday afternoon is a good indication that it’s under control. CalFire has also drawn down some of its resources. Whereas at the beginning of the fire, yesterday, CalFire hit the blaze with as many as four planes and two copters, while the Anderson Valley Fire Department fought it aggressively from the ground.

For regular updates you can check the CalFire incident page.

UPDATE, July 5, 4:45 p.m. — The Peach Fire has grown to between 20 and 25 acres, but firefighters have gotten a handle on it and have stopped forward progress, according to a CalFire spokesperson. There is an evacuation warning for Deer Meadows Rd. but no evacuation has been ordered yet. Firefighters continue to battle the blaze on the ground aided by a significant air-support, with as many as six aircraft hitting the fire with water and retardant drops. 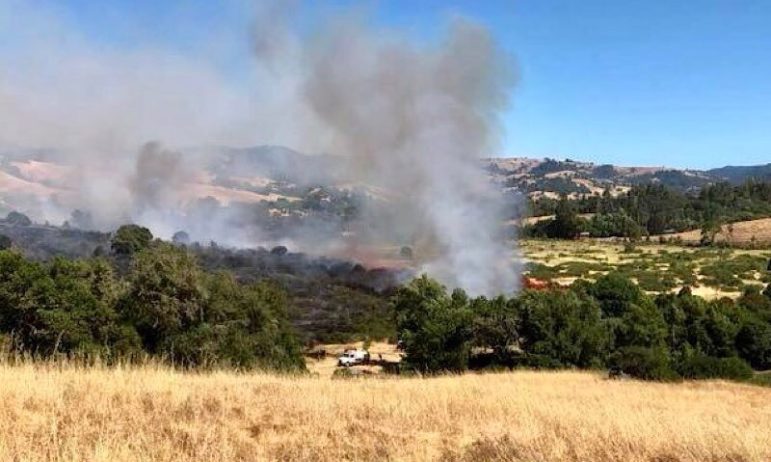 The Peach Fire near Boonville, taken at about 4:20 by a reader.

UPDATE 4:25 p.m. — The fire that broke out near the intersection of Hwy. 128 and Peachland Rd., a couple miles west of Boonville. is now being called the Peach Fire. The fire has quickly grown to about 20 acres, and some nearby residents may already have been evacuated. Authorities are considering ordering a larger evacuation, but it does not appear to have happened yet. Currently there are five fire engines, four airplane, two copters, three dozers and three crews on the fire; and more resources are en route from Willits and elsewhere.

Our friends are Mendosportsplus happened to be driving down Hwy. 128 when the fire broke out and they are delivering some video of the fire growing:

MENDOCINO Co., 7/5/18 — A small wildfire has broken out near Boonville. We’re waiting on more info from CalFire on the status of the fire, but they have begun attacking. It appears to be burning behind a vineyard, near the intersection of Peachland Rd. and Hwy. 128.

There is at least one helicopter on the scene as well as water tanker, according to scanner traffic, and an air attack is under way.

Here are some videos from our friends at MendocinoSportsPlus.