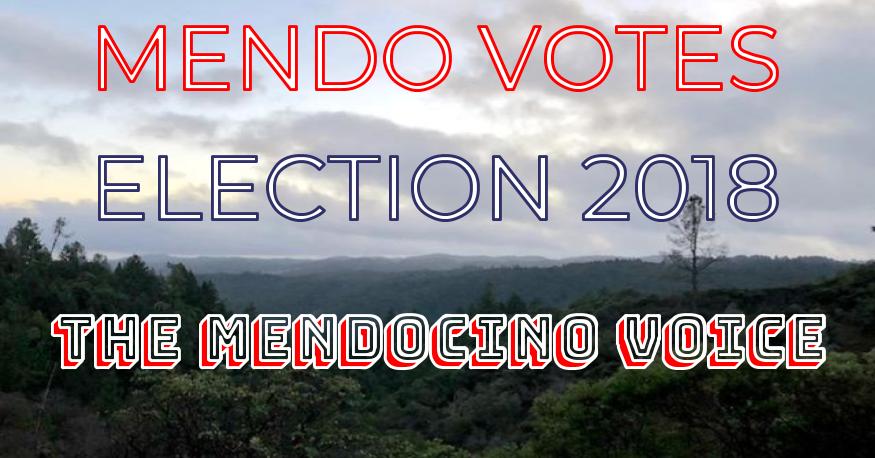 MENDOCINO Co., 6/22/18 — The Mendocino County elections office has released the final tally of votes in the 2018 June primary election.

Moving on to the Nov. general, or run-off, election in District 3 are John Pinches and John Haschak, and in District 5 Ted Williams and Christ Skyhawk will go to the run-off. Measure G has failed and Measure C passed by an incredibly narrow margin. Michelle Hutchins won a narrow majority in the county superintendent of schools race, meaning there will be no run-off.

Altogether 22,855 people voted in Mendocino County, out of 47,214 registered votes in a county with an estimated total population of 88,018 as of 2017 — though about 21.2% of the people in the county are children under voting age. That gives us a registered voter turn out of 48.4%, which is pretty high for a primary election in a mid-term year. But given that there are rough 69,360 people of voting age in the county that only gives us an adult voting participation rate of 33%. And in close elections like Measure C, where only about 10 votes made the difference, voter participation becomes the overwhelming factor.

Called for comment John Haschak said, “I’m very excited that and honored that the people have voted for me, and I’m looking forward to a campaign where we can really talk about the future of this district and this county.”

Adding, “I hope that when people get to know me more they’ll see what kind of vision I have for the county and they’ll see that I’m a hard worker and that I’m a clear thinker and that I’ll have an open door to everyone and will listen to people’s concerns and that hopefully people will respond to that. Because I think that the county does need to change and these are times that require some change.”

In a brief phone conversation John Pinches said, “Well, I think it’s a whole new ballgame.” Adding, “I just want to appreciate all the folks who got out and supported our campaign and voted — and hope to get more support for November. It’s basically a candidate with no experience versus a candidate who has 12 years of experience — so I think that’s a clear distinction. But we’re not taking anything for grant, and we’ll do the best we can.”

Reached for comment on the phone Chris Skyhawk said, “I’d like to thank the voters of the Fifth District for sending me to to the run-off and I’m looking forward to working on issues like affordable housing, living wages jobs, environmental protection and economic development. I’d like to thank Arthur Juhl, Alan Rodier and David Roderick for everything they contributed to the campaign — they brought a lot of vigor and integrity to the discussion, and I appreciate it.”

Measure C barely squeaked by, winning the super majority it required by the tinniest of margins. With 6879 votes in that election Measure C got 4593 votes or 66.77%. That’s a margin of about 10 votes. So don’t say a your vote doesn’t count, and remember that these things are decided by the people who actually show up to vote.

Katrina Bartolomie won decisively with 13150 votes or 66.8%, obviating the need for a run-off election.

Michelle Hutchins won a majority of the vote with 9810 votes or 52.11%, meaning there will be no run-off.

In several elections incumbents ran without opposition, winning above 95% with only a few write in candidates as a dissent. Those winners include Sheriff Tom Allman, District Attorney David Eyster, Auditor Controller Lloyd Weer, and Treasurer Tax Collector Shari Schapmire.

In many of these races large percentages of the voters simply skipped voting. For instance, in the election for district attorney, Eyster ran unopposed, but only 16,648 people out of 22,855 voters actually cast a vote in that race or 72.8% — meaning more than a quarter of voters just skipped that box on their ballot. An additional 459 voters, or 2.76%, wrote in a candidate. So though Eyster officially won with 97.24% of vote, he actually only carried 70.7% of voters in his unopposed race. Similarly, Sheriff Allman officially won 98.3% with 18,950 votes. But he only carried 82.8% of the vote.

Here is a PDF of the full election results for this county, including our tallies for state and federal office: