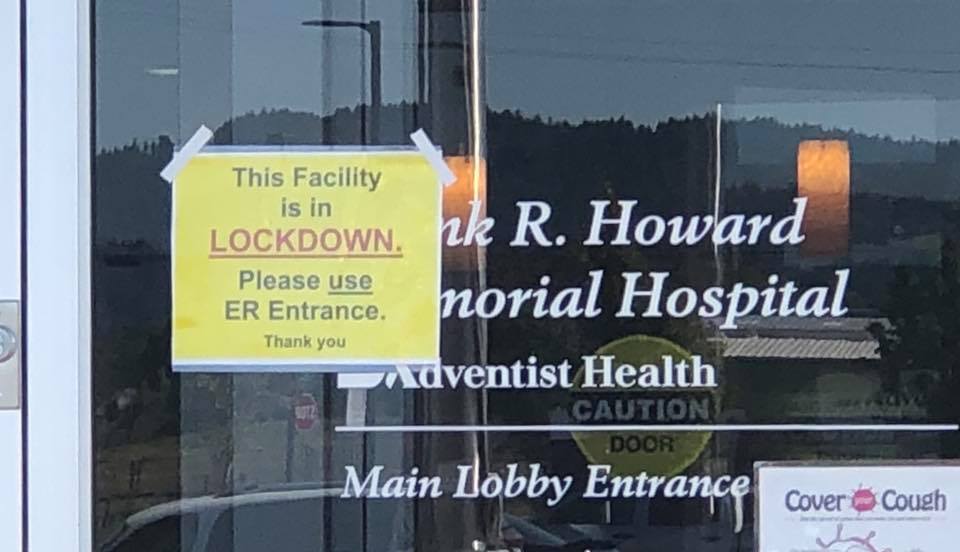 A sign was posted in the window of the main entrance stating that the hospital was on lockdown. The lock down has been lifted and the threat deemed not credible.

WILLITS, 5/13/18 — Howard Memorial Hospital went into lockdown for a few hours this afternoon, after a man entered the hospital and made some comments that were perceived as potentially threatening — but at no point did the hospital cease to function, and in fact remained in full operation and seeing patients during the lockdown. 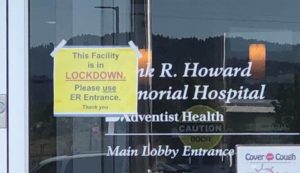 A sign was posted in the window of the main entrance stating that the hospital was on lockdown. The lock down has been lifted and the threat deemed not credible.

Sometime before noon a man entered the hospital and proceeded to speak in a way that were perceived as a potential threat. The conversation was overheard by hospital staff, and as Howard’s communications manager Cici Winiger explained, “Out of an abundance of caution for the safety of our patients and staff we put the hospital on lockdown while we tried to figure out if it was an actual threat — and it wasn’t. So the situation has been resolved and now the lockdown has been lifted.”

Officer Rocci McCoy of the WPD explain that the police had found “no credible threat.”

When this reporter arrived at the hospital two officers from the Willits Police Department were on the scene, with one patrol vehicle, speaking with the man who had made the comments. He was joined by a boy and a woman, who appeared to be family. The three then drove off together, and no one was detained. This reporter witness only a brief and polite conversation with the man, and at no point did it appear that he had been detained.

While the situation was ongoing patients and family continued to enter and leave the hospital peacefully, and on the whole it did not seem tense.