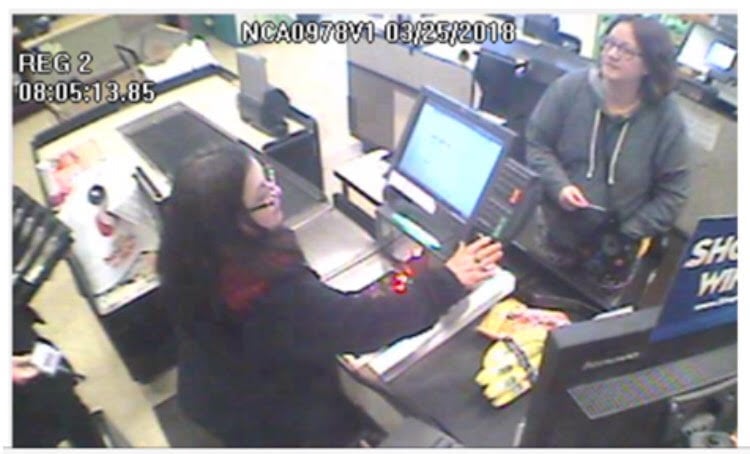 MENDOCINO Co., 4/3/18 — The California Highway Patrol and other agencies have released new details about the tragic car accident that claimed the lives of the at least five members of the Hart family, and which has captured the attention of the nation. According to the CHP new evidence from the crash makes it appear likely that the crash was intentional — something that has been feared since reports started coming out of Washington State, that the children may have suffered child abuse, that the family took off from their home without warning, after a visit from a social services agent. 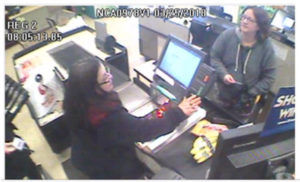 The CHP has also released new information concerning the whereabouts of the family in the days prior to the accident, and released a photograph of one of the parents, Jennifer Hart, taken at the Safeway supermarket in Fort Bragg on the evening of Saturday, March 24.

The family is now believed to have left the Newport, OR area on the morning of Saturday, March 24 and arrived in Fort Bragg that evening. They are believed to have remained in the Fort Bragg area until at least 9p.m. on Sunday, March 25. The vehicle and bodies were discovered over the side of an ocean cliff, on a turnout, off Hwy. 1, north of Westport, near Juan Creek, on March 26, at about 4:15 p.m. but investigators have not located any witnesses to the car crash itself.

Of the family of eight, the bodies of the two parents, Jennifer Jean Hart and Sarah Margaret Hart, 38 have been found, as have the bodies of three of their adopted children, Markis Hart, 19, Jeremiah Hart, 14, and Abigail Hart, 14. The bodies of their other three adopted children, Devonte Hart, 15, Hannah Hart, 16, and  Sierra Hart, 12 have not been found, and as such those three remain listed as missing. However, given the intense media attention, and police search for the missing children, with each passing day it becomes increasingly likely that the children also perished in the crash, and that their bodies have simply not yet been found.

The two adult women were belted into the car, but the three other bodies were recovered near the car, not inside. Ocean conditions, with strong currents, hazardous rocky beaches, and murky water, have hindered the ability of researchers to conduct operations and send in divers.

To that end, the Mendocino County Sheriff’s Office has announced a massive search operation, to be held tomorrow, April 4, up and down the Mendocino coast. Approximately, 71 searchers will participate, beginning at 8 a.m. (lowtide), with the headquarters at MacKerricher State Park.

According to a press release issued by the MCSO, searchers will focus on two stretches of coast: from Noyo Harbor to MacKerricher SP, and from the crash site (north of Westport) south. These areas have been chosen based on “drift pattern analysis” provided by the Coast Guard. Authorities will search on land and sea, using boats and aircraft.

The new information concerning the likely intentional nature of the crash comes from the computer controls of the car which control airbag deployment, which staff from the California Highway Patrol and Mendocino County Sheriff’s Office discussed in a press conference on April 2. That chip recorded that the last application of the brakes came 70 feet before impact, or airbag deployment. That data does indicate that the car first came to a stop in the highway turnout, then proceeded to accelerate off the cliff. Though earlier reporters had stated that the speedometer was “pinned” to 90mph, this measurement is considered extremely inaccurate and could have been caused by the impact of the crash. The details from the airbag control seem to give a more accurate picture of the final moments of driving. No brake marks nor skid marks were found on the road, and investigators previously did not have information about which direction the vehicle was travelling.

Here is the updated section of the press release from today:

On 04-02-2018 the Mendocino County Sheriff’s Office received information that Jennifer Hart may have been seen on 03-25-2018 at a business in Fort Bragg, California.

Sheriff’s Office investigators obtained video footage from the business and noted it was of a poor quality resolution.  The footage was provided to CHP investigators who are working with FBI agents in an attempt to enhance the viewing quality.

As of 04-03-2018 the search for the missing children (Hannah Hart, DeVonte Hart and Sierra Hart) is still ongoing.

As of this date it is still unclear if the missing children were inside the vehicle during the incident.

A large scale Search & Rescue operation with approximately 71 searchers is schedule to begin on 04-04-2018 at 8:00 AM during low tide conditions with the base of the operation being located at the MacKerricher State Park.

The search area will focus from the Noyo Harbor to the MacKerricher State Park based upon ocean current and drift pattern analysis conducted by the US Coast Guard.  A further search will be conducted from the crash site with focus to the south of that location. This search is anticipated to include aircraft, boat and land searchers.

The following public safety agencies will be participating in the 04-04-2018search operation:

The Mendocino County Sheriff’s Office would also like to thank the following public safety agencies that have assisted thus far in the missing persons and coroner’s investigation to date:

In an attempt to resolve this situation the Mendocino County Sheriff’s Office will be sending out a press release each day at 9:00 AM highlighting information from the previous day’s investigative work.

All telephone call and email inquires will be referred directly to the Mendocino County Sheriff’s Office press release page on our website.

Anyone wishing to subscribe to the Sheriff’s Office automated press release notification system can do so by visiting www.mendocinosheriff.com and by accessing the press release page on the website.