Editor’s note: This article was originally published yesterday but has been updated today with new information from an interview with Lt. Shannon Barney of the Mendocino County Sheriff County.

MENDOCINO Co., 4/8/18 — A body has been discovered in the surf near the site of the Hart Family crash site. The body could not immediately be identified and was found in the vicinity of Juan Creek off Highway 1, around 2p.m. by a couple vacationing in the area. After an investigation, the body has been determined to be that of an African-American female of unknown age, but the body’s state of decomposition means that any additional positive identification is difficult to determine at this time, and DNA analysis will likely be required.

Deputies from the Mendocino County Sheriff-Coroner’s Office (MCSO) had patrolled the area an hour before the body was reported, but had not turned up anything significant. Assisting the couple, a third bystander pulled the body from the surf, after which it was recovered by the Westport Fire Department and MCSO was called to the scene. MCSO investigators are currently looking into the possibility that the body may belong to one of the missing Hart girls, but DNA analysis may take several weeks to complete.

The search and rescue operations have continued since the crash was initially found almost two weeks ago, on March 24, but were put on hold temporarily by the recent storm.  A multi-agency 74 person search and rescue effort that took place along the coast this Wednesday, prior to the storm, turned up nothing conclusive.

In an interview with The Mendocino Voice, MCSO’s Lt. Shannon Barney said that the search and rescue operations for the Hart family are currently suspended until storm passes, but that it is not unusual that a storm surge such as the one that just hit will “shift currents and often deposit additional things on the beach,” adding that a change in wind patterns can cause currents to change and sometimes release objects that are stuck in kelp or lodged in rocks. The MCSO, as well as the Westport fire department have been conducting ongoing patrols of the area, and two had already been conducted prior to the body being found yesterday.

The MCSO continues to seek information from anyone who may have seen the family or the three Hart children who are still missing, Devonte, 15, Hannah Hart, 16, and Sierra Hart, 15. The bodies of the parents, Jennifer and Sarah Hart, 38, have been found, as have the bodies of three of their adopted children, Markis Hart, 19, Jeremiah Hart, 14, and Abigail Hart, 14.

Several new details in the investigation have come to light over the last several days. A cell phone was located in the area of the vehicle crash on Tuesday, but as of now it is unclear whether the phone is connected to the family. Investigators have also determined that the parents, Jennifer and Sarah Hart, as well as the three children found near the vehicle, were not wearing seat belts, although it was previously reported that the parents were belted into the vehicle. The women were found in the car while the children were found outside. Authorities have also stated that the crash appears to be intentional, with Sheriff Tom Allman stating in interviews that he believes the incident to be “a crime.”

Barney noted that the missing persons search for the three missing Hart children is ongoing, saying “There is very much a chance the they could be out there — you can’t rule out other places until you know where they are exactly.” He said that the Mendocino County Coroner’s Office is conducting the investigation into the body found yesterday, but he does not expect results quickly. DNA tests take several weeks to complete, Barney said, as long as the lab has the proper samples. In this case, Barney said the Coroner’s Office will be relying on sibling samples taken from the previous Hart family autopsies, as it believed that there were two sets of biological siblings amongst the adopted Hart children.

“The adoption agency is out of business, so I’m not sure how to find their natural families if they even have them,” Barney said. “What we were told is that there are two sets of siblings, so I’m hoping the samples we have from the prior autopsies will be sufficient. I’m crossing my fingers.”

The family was seen in the Fort Bragg area on Saturday, March 24, and the vehicle was found to at the bottom of a cliff on Monday, March 26. Authorities are currently investigating a recording of Jennifer Hart that was taken at the Safeway in Fort Bragg on the evening of March 24, after the family is believed to have travelled south from Oregon on the morning of March 24.

Barney said that there is not currently new information about what the family was doing in the Fort Bragg area, and that information may be ultimately be clarified by cell phone usage, which the California Highway Patrol is investigating. One cell phone was found at the crash location when it was initially discovered, and another found recently, but CHP is still in the process of determining whether either phone is connected to the family. Barney said that the CHP is leading the investigation into case’s background. Noting the agency has a lot of experience investigating fatal crimes involving vehicles, such as DUI manslaughter charges, Barney said,“They suspected it may be an intentional act, so falls into their domain to do a criminal investigation.”

Barney said Saturday that the storm surge was expected that evening. Another search and rescue operation may be conducted on Monday, after the storm had passed, with divers as conditions permitted, and Barney said that patrols would continue until then. The multi-agency operation that took place on this past Wednesday was planned for a time of relatively calm waters, he said, since the MCSO did not want to endanger searchers with unpredictable wave conditions.

Anyone with information is asked to call the MCSO tip line at 707-234-2100. MCSO is issuing daily updates due to the international media attention that the family’s tragedy has attracted, and representatives have stated the media interest is straining the department’s resources.

This article will be updated as more information becomes available. You can read our previous coverage here, and the full MCSO press release below. The flyer concerning the missing children is below the press release.

Synopsis: On April 7, 2018 around 1:58 PM the California Highway Patrol (CHP) received a call regarding a found body in the surf of the Pacific Ocean at Juan Creek and Highway 1 in Westport CA.  This area is in the immediate vicinity of the recent Hart Family crash. The Mendocino County Sheriff’s Office responded to the location to conduct a Coroner’s Investigation and learned that a couple, vacationing along the coast, observed a possible body floating in the surf near Juan Creek.  The Westport Fire Department had patrolled the area an hour prior but did not see anything.  The body was pulled from the surf, onto the beach, by a third bystander where it was later recovered by Westport Fire.

The recovered body appears to be that of an African American Female but the age and a postitive identity could not be determined.  An autopsy will be conducted on Tuesday and the cause of death is unknown.   The Sheriff’s Office is investigating the possibility that the body may be one of the two missing Hart girls but identification will most likely be done through DNA analysis, a process that can take several weeks.

It is not uncommon after a significant storm, such as the one passing through the north state currently, to bring items to the surface or wash onto the beach.  The Mendocino County Sheriff’s Office is monitoring the ocean conditions to see when further searches might be safetly conducted.  This evaluation includes the use of divers if conditions permit. There were no other signs of the other missing Hart children. 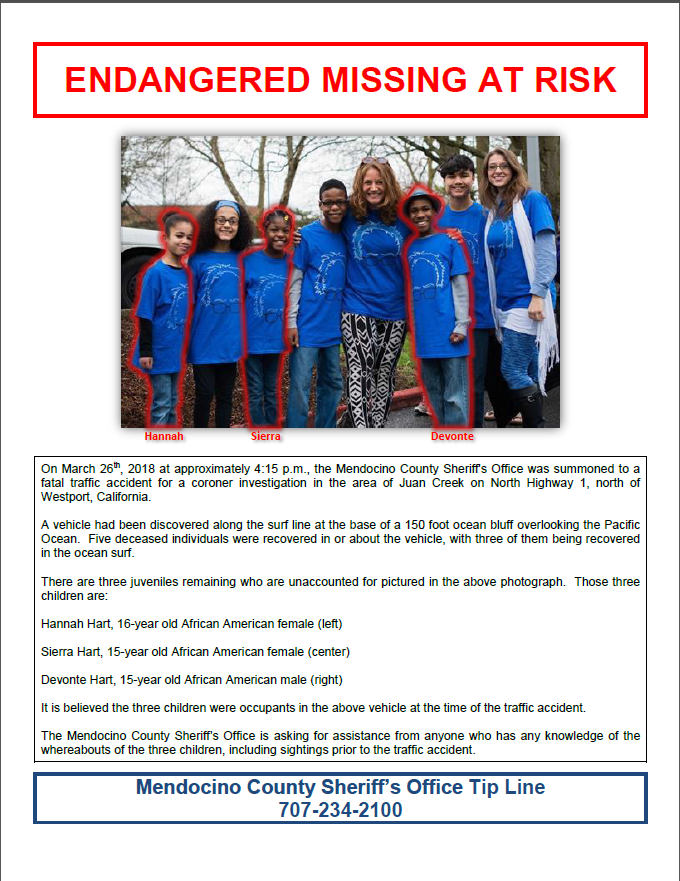