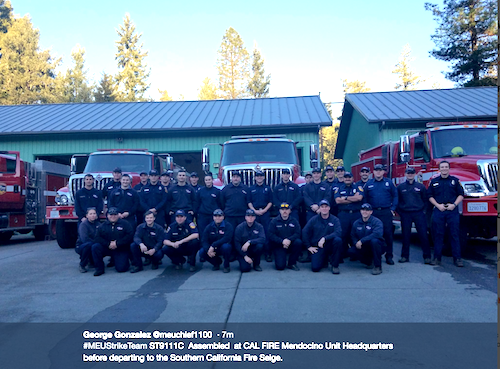 There are currently five different fires happening in the region around Los Angeles, leaving tens of thousands of acres destroyed, hundreds of structures decimated, and tens of thousands of people evacuated, with more evacuations ongoing. Right now about 87 fire fighters from Cal Fire in Mendocino are heading there, with another strike team of county firefighters on the way as well. Austin said she expects “more to be leaving as the need arise,” and that “more orders are going every day.”

Mendocino CalFire Unit Chief George Gonzalez shared a photo of one of the strike teams on Twitter at the CalFire Mendocino Headquarters before the team took off:

On Monday, the Little Lake Fire Department posted on Facebook: “Although it’s December 5th we just sent out Chief 5401 as a strike team leader and Engine 5468 with four personnel to the Creek Incident in Los Angeles County. Let’s have wishes of safe travels for the strike team. We will keep everyone updated.”

Many fire fighting teams from around the state assisted during the Mendocino-Lake Complex fire, and readers may remember seeing Los Angeles fire trucks in the Willits area in the early days of the fire, which Austin pointed out is an essential part of mutual aid. “They came to help us, so we’re going to help them,” she said.