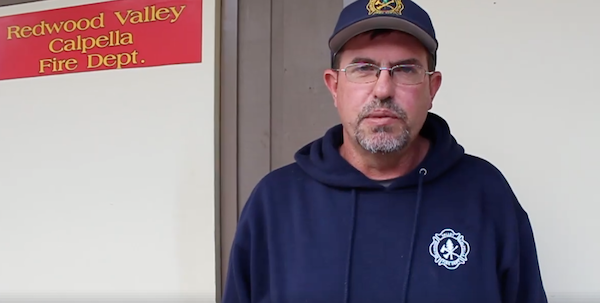 MENDOCINO CO., 11/12/17 — It’s been a little more than a month since the Redwood Fire started, and many residents are beginning to rebuild their homes and lives after the county’s most devastating wildfire in modern history. But after an unprecedented fire, which ultimately took nine lives, many are still thinking about what exactly happened that first night and in the days that followed. Chet Collins, a Ukiah native who has lived in Redwood Valley for 15 years, is one resident who stayed behind during the evacuation orders, and decided to create a short film about the Redwood Fire.

Collins explained he wanted to make the film after the fire to share the experiences and perspectives of himself and his neighbors. His home was damaged, and while he has insurance to rebuild, many nearby lost their homes entirely. “This is something we experienced first hand…I stayed during the evacuation – I know everyone was affected in the valley,” he said.

To capture the experience, Collins created a ten minute long movie, featuring interviews with Sheriff Tom Allman, Acting Redwood Valley Fire Chief Brendan Turner, residents who escaped from the fire, as well as some who stayed behind.

“There are still so many questions about the event,” said Collins. “Talking to the Chief here in Redwood Valley helped us understand what happened, and I wanted to share that.”

In the film, Turner describes the first several hours and days of the fire, describing the battle against the flames as they started as “several hours of sheer terror.” Collins examines the question of whether or not to evacuate from the perspective of residents concerned about their homes, and also from public safety officials.

He said he plans to continue the project as the rebuilding effort continues, since the initial film is “such a small snapshot,” but that many people are still processing what happened. “A lot of people are still… You know, they’re not ready to talk about it. Whatever their situation is, just experiencing the wind, and the fire coming, and how it was such an intense experience for all of us…there’s so much to be said,” he added.

One positive thing Collins wanted to mention was how much the community had come together throughout the fire, something he was inspired by while making the film. “Part of the message that wasn’t in there, was that people feel more connected to their neighbors and more united. There’s in an uplifting message here in some way — many different people of many people, of all different ages, have said that they feel more connected to the community,” he said.

You can watch the whole thing here: