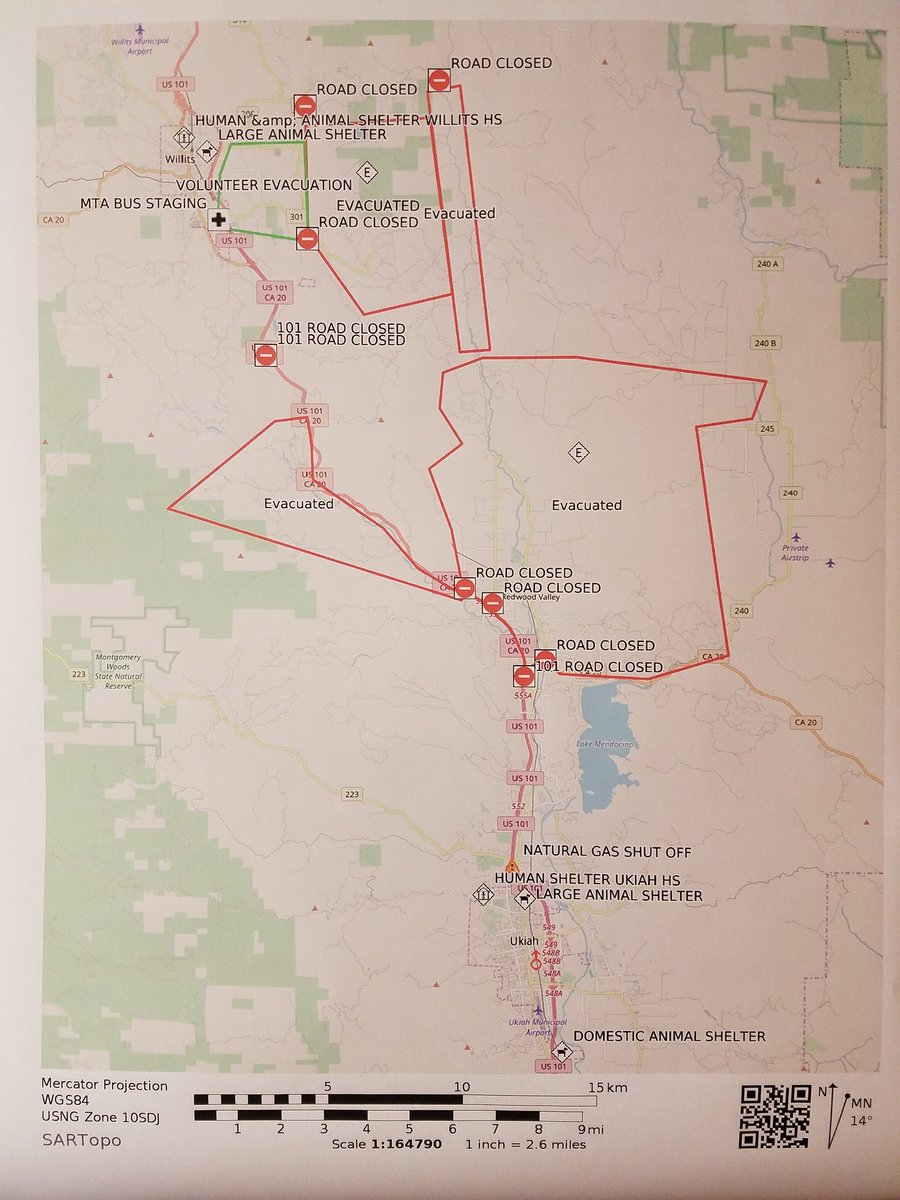 The evacuation map issued by the sheriff as of Day 2

UKIAH, 10/10/17, 1:00pm — This morning, on the second day of the massive Redwood Complex fire, county and state officials held a press conference in front of the county offices in Ukiah, which can be viewed here. The Redwood Complex Fire, which started burning late Sunday night, has now reached 21,000 acres, and still has no containment. Firefighters are working hard to stop the conflagration, but are stretched thin by the unprecedented situation of having several massive fires burning across Northern California — and the fires could continue for several days.

Mendocino County Sheriff Tom Allman confirmed that three people have died in the fire, and four have been seriously burned, with a couple dozen more receiving minor injuries. Fifty houses have been destroyed and another 40 structures burned down, and whole sections of Redwood Valley are devastated. As of this morning the Golden Rule RV park was surrounded by fire but not burned. Hospitals are open throughout the county, and no evacuation of any hospital is planned or expected, contrary to rumors. Hwy. 101 has been open, between Redwood Valley and Willits, since about 10pm last night, and remains open. State Route 20 west of Highway 101 has remained continually open.
(continued below) 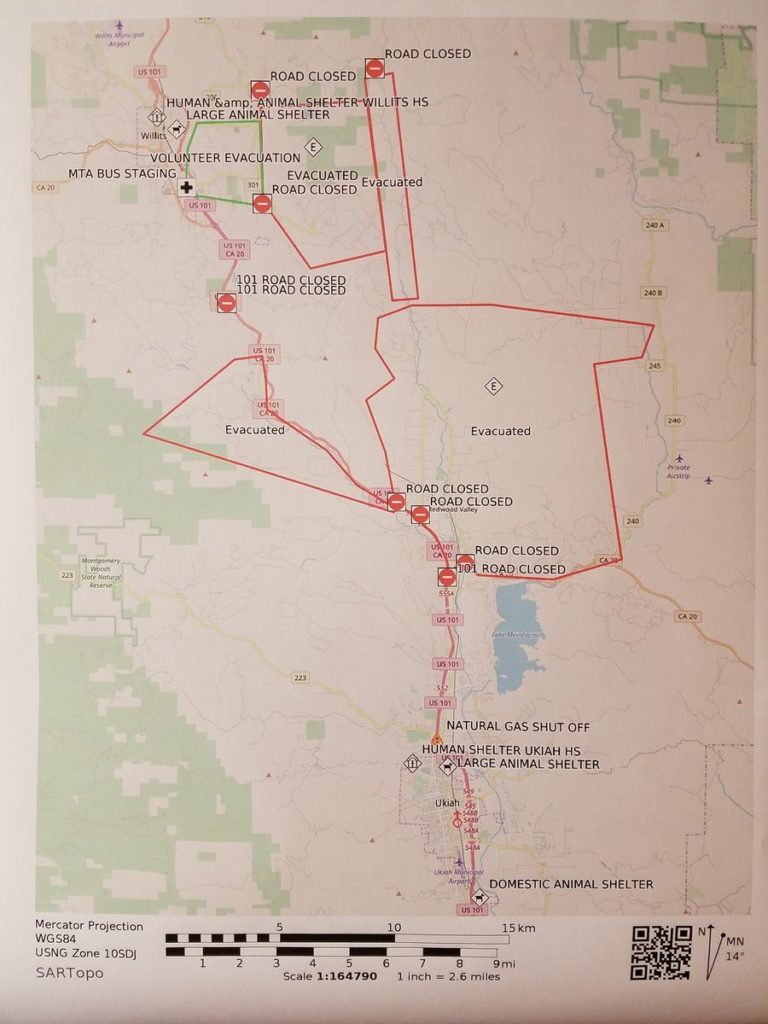 The evacuation map issued by the sheriff as of Day 2

Vice President Pence made brief statement about the fire, “I can assure you, as I did the governor, the federal government stands ready to provide any and all assistance to the state of California.” The Federal Emergency Management Agency (FEMA) has been authorized to assist California, and a disaster declaration has been made. State Senator Mike McGuire cautioned that this fire could last for several more days, and that people should remain prepared, attentive, and careful.

More information will be available at 2pm when county officials and Willits city officials will hold an information meeting at the Willits library, please help get word out to residents of areas without communications. There will be another update at 4pm, with a press conference scheduled for Ukiah again.

AT&T will be setting up a temporary cell tower in Willits, restoring some internet and phone service. The temporary tower communicates via satellite. Santa Rosa and the town of Napa will also get temporary towers. It’s unclear if similar efforts will be made farther north, or in other areas without communication, and also not clear what kind of capabilities the tower will have. Basically all of coastal Northern California north of Santa Rosa operate on one fibre optic cable that runs roughly parallel to Hwy. 101. It appears that the fire has severed that cable, knocking out communications for a huge region of the county. CalOES is pushing hard to restore communication services — but given that the fire continues to burn in the area, it’s unclear when full services could be restored.

Getting Information and Evacuation

Right now the best way to get official updates is by calling the Emergency Operation Center set up by the county at 707-467-6428. The Mendocino County Sheriff’s Office’s Twitter page (@MendoSheriff) is doing an excellent job of tweeting updates frequently and is a good source for continuing news. The CalFire incident page for the Redwood Complex Fire can be found here.

People are urged not to contact local fire departments, CalFire, or call 911 unless there is an emergency; the number listed above is to best way to get info about the fire and evacuations, and the county’s 2-1-1 service is also a good resource. You can also register your phone number for “reverse 911” calls and emergency notifications at this link. The Sheriff’s Office is requesting that people who have been evacuated not return to their homes until the evacuation order has been lifted, and to avoid areas near the fire unless necessary to keep roads clear for emergency responders.

Evacuations centers are Willits High School, Ukiah High School, and evacuees are also welcome at the Coyote Valley Casino event center located at 7751 N State St in Redwood Valley. Meals for evacuees are available at the Coyote Valley Casino event center as well as the Ukiah Elks Lodge at 1200 Hastings Road, and some of the shelters. The WHS farm, Willits Rodeo Grounds, Ukiah Fairgrounds (for large animals), and the Ukiah Animal Shelter and on Plant Road in Ukiah (call 707-671-4128). Mendocino College has opened facilties at its Ukiah campus from 8am – 10pm daily, with shampoo and hygiene products available in the Athletic Building. Many residents around the county have been opening their homes to evacuees as well, including the owners of Fortunate Farm in Caspar.

One major concern for evacuees and their families is how to get in touch with loved ones while cell and internet service are down in the fire regions. One way to connect is through the Red Cross’s “Safe and Well” registration website, and the county will coordinate registering people at the evacuation centers on this website, said Sherif Allman this morning. Allman added that the MCSO will begin posting information about the animals that have been evacuated to shelters later today on their Facebook page.

The California Office of Emergency Management (CalOES) has brought in resources from across the state, such as cots and food for evacuees. Governor Jerry Brown has also declared a state of emergency, in the affected counties and the National Guard has been mobilized to bring additional resources.

Sometime last night PG&E (Pacific Gas & Electric) shut off natural gas to Willits. A PG&E spokesperson explained that the fire has damaged some of their gas line infrastructure, and that they have shut off other lines preemptively to be safe in case the fire spreads. The same holds true for the electric lines — some have been been burned by the fire, and others have been de-energized preemptively as a precaution. About 5300 customers have lost power in Mendocino and Lake counties. Of those, 2500 have lost power in Mendocino, with the majority being in Redwood Valley and about 100 in Ukiah and 65 in Willits.

About 4300 customers are without natural gas, mainly in Willits. PG&E urges people to exercise caution. If you smell a gas leak, leave the area and then call officials, do not call from the affected area as there is a small chance the phone could ignite the gas. PG&E is also saying that there is no need to actually turn off your gas meter, unless you smell a leak and it is safe to shut it off. If you do shut if off, PG&E is telling customers to allow PG&E to turn it back on, not to do it yourself. PG&E updates can be found here

Because the fire continues to burn crews from PG&E have not been able to go in an assess the level of damage, meaning that they do not yet have an estimate for when the power and gas will be back on. They may need to visit individual residences to turn on pilot lights.

Nationwide many fire fighting aircraft, have been diverted to Northern California, according to Senator McGuire. In fact, with 47 take offs, CalFire hit a record for the most number of flights flown by their heavy tankers yesterday. But officials have pointed out that the Redwood Complex is only one of several enormous fires that are burning across the region. With Napa, Santa Rosa, Lake County and several other counties, hit by big fires, firefighters are stretched thin, working days long shifts without sleep to stay on the lines. McGuire emphasized that this is truly a historic fire event that we are living through.

News is beginning to trickle in of the human toll that these fire has had on Mendocino. The sheriff has confirmed that three people have died in the fire, and that number could grow as crews get into burned down areas. A couple dozen people have been burned, with at least four severe cases, and doctors and nurses worked through the night treating victims, including some who had themselves lost their homes.

At least 50 houses, and some 40 other structures, have burned down, but the sheriff announced this morning that insurance companies are ready to begin paying out policies. Still, money will not replace what many have lost. As strong wind gusts fed the fire, it spread with incredible speed through areas of Redwood Valley, and Potter Valley, and evacuees have stories of departing with only minutes notice, leaving much behind, including sometimes horses and pets.

At an update to the Mendocino Board of Supervisors this morning, Sheriff Allman commended the supervisors, especially First District Supervisor Carre Brown, for helping to assist people evacuate, after she had been evacuated herself. Third District Supervisor Georgeanne Croskey has also been evacuated, as has County Counsel Katherine Elliot, Allman noted. In Willits, City Councilwoman Saprina Rodriguez has been staffing the evacuation center, and explained she first heard about the fire at 1:45am on Monday morning when her sister had to flee a burning home. Rodriguez had been working for 10 hours straight on Monday morning, and said Willits had received about 300 evacuees in the first 12 hours of the fire.

The MCSO is recommending that people who want to donate give monetary donations instead of tangible items, to best help evacuees get what they need. The Community Foundation of Mendocino County has set up a donation fund here.

There are a variety of different ways to volunteer, but it’s probably a good idea to get in touch first to see what kind of help is most useful. North Coast Opportunities has opened up a Volunteer Network Volunteer Reception Center at 413 N. State Street, which will be open from 9 – 6 as long as volunteers are needed. If you want to help, NCO recommends that you “report to the center with photo identification. Agencies in need of volunteers, and volunteers with questions, should call our hotline at 467-3236 and leave a message.” The Elks Lodge in Ukiah is also looking for volunteers to assist with serving meals to evacuees.

Here’s the links to videos from this morning’s press conference, along with some additional interviews. We’ll be updating throughout the day, additional press conferences are planned for Willits at the Willits Library on East Commercial St at 2pm, with third district Supervisor Croskey, Willits City officials, and the Mendocino Sheriff, and another press update in Ukiah at 4pm at the County Administration Building on Low Gap Road. We’ll put live broadcasts on our Facebook page if service permits.

Click on these links to watch video from the 8am Ukiah press conference, interview with the CalFire Mendocino Unit Public Information Officer Tricia Austin, and with State Senator Mike McGuire.

You can read our previous coverage of the fires, starting a few hours after the fire began on early morning Monday morning before dawn, and also our coverage from Monday. We’ll also be updating Facebook regularly, and if service is limited, we’ll post additional information there, and you can also follow us on Twitter.

*Please note, we are in and out of cell reception and have limited internet and cannot respond to all questions about specific locations or situations. We’ll be updating our website mendovoice.com and this Facebook page as often as we can verify information. If we’re not able to respond we may be out of service but will update ASAP.

By Adrian Fernandez Baumann and Kate B. Maxwell