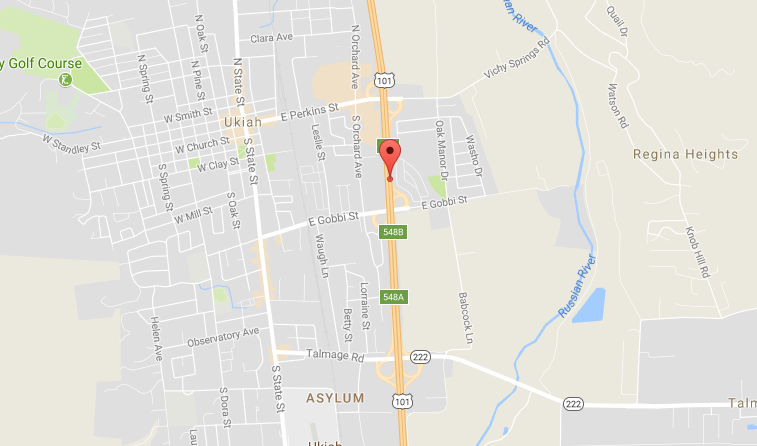 The following press release was issued at about 1pm by the California Highway Patrol, concerning the plane landing on Hwy. 101:

On July 8, 2017 at approximately 1215 hours, Ukiah CHP Communications Center began receiving reports of a plane landing on US-101 near Gobbi St. in Ukiah.

The Communications Center immediately dispatched all available CHP units and Fire/Rescue personnel. Upon CHP arrival, it was confirmed that a solo piloted small aircraft made an emergency landing on northbound US-101, south of Talmage Rd., after experiencing a mechanical malfunction. After landing, the pilot managed to park the plane on a wide shoulder and away from the traffic lanes.

No injuries were reported by the pilot and he elected to make arrangements for a mechanic to respond. With assistance from the fire department, the freeway perimeter fence was removed and the aircraft was pushed into an adjacent field for the safety of all involved and so freeway traffic would not be impacted. The CHP is documenting the incident and has notified the Federal Aviation Administration and will provide information to the National Traffic Safety Board.

ORIGINAL:
MENDOCINO Co., 7/8/17 — A small Cessna airplane landed on Hwy. 101 near the Gobbi exit in Ukiah at around 11:30am this morning. No one seems to have been injured, and the pilot seems to have walked away. According to Kym Kemp at Redheaded Blackbelt the plane is registered to Lee Barlow out of Fort Bragg with a tail number of N3583J is the tail number.

The Ukiah Airport is about one mile from where the plane landed.

The plane blocked traffic briefly, but has been removed from the freeway, with a section of fence cut down to allow first responders to clear it out.

We’ll be updating with more information as it become available.