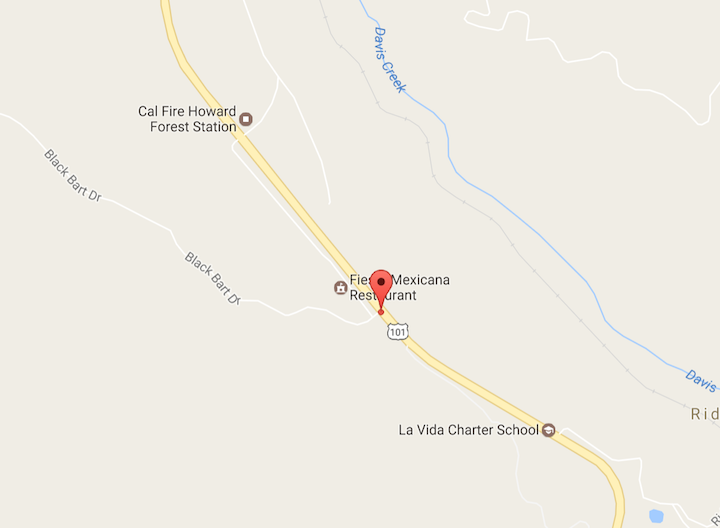 Location of the collision.

CORRECTION 3:15 6/1/17 — We erroneously stated that the accident had occurred at Harris Quarry, when in fact it did not. The accident occurred on Black Bart Rd. We apologize for the error.

One man died in a heavy equipment accident, when he lost control of the heavy loader he was opperating, and fell a great distance down a hill.

UPDATE 2:58, 6/1/17 — Sources close the scene are reporting that one man has died in a heavy equipment accident on Black Bart Rd. Apparently the driver of a loader lost control of the machine and fell down a steep incline. The vehicle burned and the driver perished.

Our condolences to the family, and everyone at the site.

UPDATE 1:25 6/1/17 — Some new information courtesy of the Howard Forest CalFire station: the vehicle is actually a loader or a tractor (a piece of heavy equipment) and it rolled down a hill, making access difficult for both firefighters and medics. However, the fire is currently contained to the vehicle and has not spread into surrounding brush.

The information officer at CalFire described the vehicle as “behind” the Harris Quarry — it’s not certain that the loader was operating at the quarry, but seems likely.

At the time the specifics of injuries are not clear, but a REACH helicopter was sent to the scene, as was CalFire’s 101 copter, and scanner chatter indicates that at least one person is being transported to the hospital.

WILLITS, CA. 6/1/17 — California Highway Patrol is reporting a traffic collision and possible vehicle fire near the intersection of Highway 101 and Black Bart Road south of Willits, near the Howard Forest Ranger station. As of 12:51pm the CHP incident log is reporting that a party may be trapped in the vehicle. Little Lake Fire, CalFire, and emergency services are responding and have just arrived at the scene as of 1:05pm.

Injuries have been reported and it sounds like people are being transported to Howard Memorial Hospital. 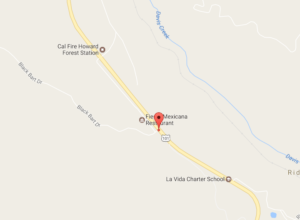 Location of the collision.