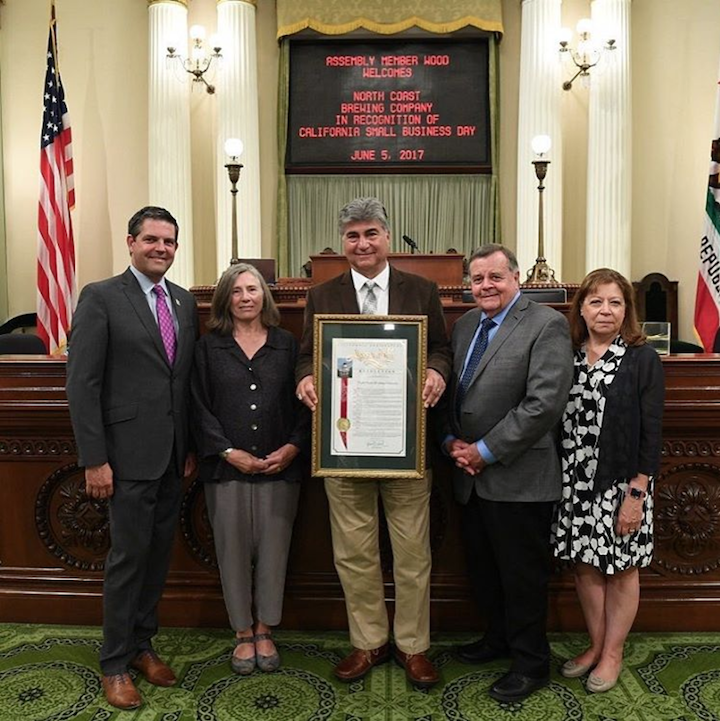 Assemblyman Wood presenting the award to the North Coast Brewing Company in Sacramento on June 5, from Wood's Instagram page.

MENDOCINO CO., 6/10/17 — The North Coast Brewing Company received an award for “Small Business of the Year” from North Coast Assemblyman Jim Wood on June 5, in honor of California Small Business Day. The Fort Bragg company, which operates under the motto “Make the world a better place, one pint at a time,’ was founded in 1988. Wood presented the award at a ceremony in Sacramento this week. 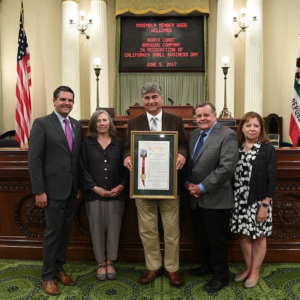 Assemblyman Wood presenting the award to the North Coast Brewing Company in Sacramento on June 5, from Wood’s Instagram page.

The brewery has received over 110 national and international awards, is the 47th largest craft brewery in the United States, and distributes its products in 47 states. North Coast Brewing Company is also a certified B-Corporation, which means the company’s commitment to philanthropy, community, and the environment are written into the corporate structure, making it one of 1700 B-corps across the world, and they regularly donate funds to support a wide variety of community organizations in Mendocino County.

Assemblyman Wood cited the company’s commitment to environmental stewardship as one of the reasons he selected them for an award. The North Coast Brewing Co. uses solar power, water and waste reduction methods, has developed a carbon farming practice with Fortunate Farm in Caspar, and employs a closed-loop system wherein “spent brewery grain is composted to sequester carbon and produce vegetables for the brewery’s Taproom.” The brewery has developed the “ocean-friendly beer” North Coast Stellar IPA, which provides donations to the North Coast Marine Mammal Fund, and is also a signed member of the Brewery Climate Declaration.

Plus, you can visit to their tap room to sample the many different varieties of Mendocino-brewed beer, a favorite weekend activity of The Mendocino Voice staff.

Here’s the full press release below:

“I have the challenge of selecting a small business every year from many qualified North Coast businesses throughout the 2nd Assembly District,” said Wood, “and the North Coast Brewing Company has some impressive qualifications.”

The North Coast Brewing Company is the 47th largest craft brewery in the country and is regularly recognized for the quality of its beers, having won over 100 awards in U.S. and international competitions.

Three partners including company President, Mark Ruedrich, founded North Coast Brewing Co. in 1988 in the coastal Mendocino town of Fort Bragg. Co-owner Doug Moody and four other key staff have been with NCBC for more than 20 years.

“We are proud to receive Assemblymember Wood’s recognition for our environmental initiatives and contributions to our region’s economy,” said Ruedrich. At North Coast Brewing Company, we have always felt that a small business in a small town can play a big role in making a positive impact on our community and beyond.”

“One of the many features that stand out for me,” said Assemblymember Jim Wood, “is their environmental stewardship. We all know how beautiful the North Coast is and when I hear that a business takes extra steps to protect the environment, I’m all in!”

In addition to environmental stewardship, North Coast Brewing Co. is one of 1,500 businesses certified as a B Corp, which recognizes the company’s commitment to social and environmental ethics, transparency and accountability. This means that the company has met the rigorous standards that measure a company’s impact on its employees, suppliers, community and the environment.

North Coast Brewing also has a strong commitment to social responsibility. They support more than 100 local community organizations and give a portion of sales to support music education and ocean mammal research and rescue. Wood added, “How can you argue with their mission – ‘Make the world a better place, one pint at a time.’”