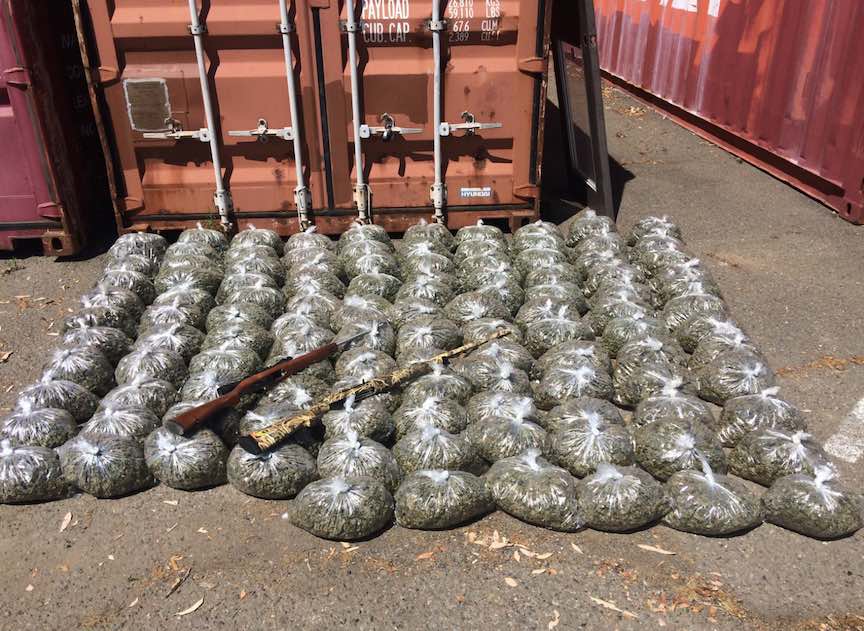 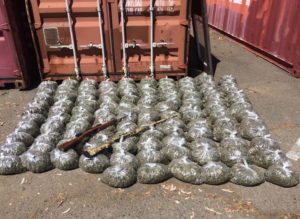 MENDOCINO Co., 6/13/17 — The County of Mendocino Cannabis Eradication Team (COMMET) and the California National Guard Drug Task Force assisted the Lake County Sheriff’s Office in a raid on a cannabis grow site on Monday, May 12, at two parcels along CA Route 20 near Clearlake Oaks. According to a statement issued by the Lake County Sheriff’s Office, the execution of two search warrants led to a search of two adjacent parcels, where law enforcement found 45,274 cannabis plants, 186 pounds of processed cannabis, and two firearms.

Six people were also arrested during the cannabis raid: four at the first parcel, which had a “large-scale” greenhouse and outdoor cannabis garden, two arrested at the adjacent parcel, where about 43,000 plants were growing on a mountain side, and one subject was arrested after they were found walking down Highway 20 east, which runs through Lake County.

The press release from the Lake Co. Sheriff’s office notes that the water source for the first parcel was “supplied in-part by a pond with unpermitted grading” and that water from the second parcel “was being diverted from a creek with a gasoline pump to a mountain top man-made reservoir.” 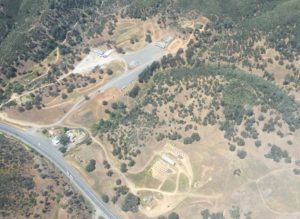 No additional information was provided in the press release about the County of Mendocino Marijuana Eradication Team (COMMET), a division of the Mendocino County Sheriff’s Office, was requested in the Lake County operation. COMMET has recently been active in raids in Mendocino County in the last several weeks.

2 search warrants result in the seizure of 45,274 marijuana plants, 186 pounds of processed marijuana and 6 arrests.

The service of 2 search warrants by the Sheriff’s Narcotics Unit with assistance from the County of Mendocino Marijuana Eradication team (COMMET) and the California National Guard Drug Task Force has resulted in the seizure of 2 firearms, 45,274 marijuana plants, approximately 186 pounds of processed marijuana, and 6 arrests. On the morning of Monday, June 12th, 2017, personnel from the Sheriff’s Office, COMMET and the National Guard simultaneously executed 2 search warrants in the 24000 block of East State Highway 20, Clearlake Oaks, California, in an area formerly known as the Oasis Motocross.
Four subjects were detained at a large scale marijuana complex with both outdoor and greenhouse marijuana plants. Two other subjects were detained on an adjacent land parcel where thousands of marijuana plants were being cultivated on a mountain side. Another subject was later located walking along East State Highway 20. The investigation led to the arrest of 58 year old Jeffrey Mann, 51 year old She Huang, 46 year old Xiaofeng Wang, 51 year old Tanng Zhili, 39 year old Martin Arellano-Carillo, and 29 year old Severiano Carrillo-Alvarado.
During a search of the large scale marijuana complex deputies seized 2 firearms, 118 approximately one pound bags of manicured marijuana bud, and 1883 marijuana plants. The water source for the grow site was being supplied in-part by a pond with unpermitted grading.During a search of the adjacent parcel, detectives seized 43,052 marijuana plants growing on a mountain side, 339 marijuana plants growing near a cabin and approximately 68 pounds of processed marijuana drying inside the cabin. The water source for that grow site was being diverted from a creek with a gasoline pump to a mountain top man-made reservoir.
The Sheriff’s Narcotics Unit will continue its efforts to eradicate narcotics from the communities of Lake County and seize the suspected profits of drug trafficking for asset forfeiture whenever possible. Anyone with information that can assist the Narcotics Unit with this effort is encouraged to call the anonymous tip line at 263-3663.