The logo of the Mendocino County Sheriff's Office.

MENDOCINO Co., 5/30/17 — The suspicious events of yesterday, reports of armed men north of Laytonville, and police response have been confirmed to have been related to an alleged theft of marijuana. 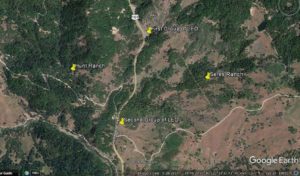 Courtesy of David Jeffreys, a map of the area where scanner traffic has indicate there are armed subjects.

Yesterday, around midday, scanner traffic and tips from readers indicated that law enforcement was responding to reports of a group of armed men in the hills north of Laytonville, near Rattlesnake Summit; while later reports from sources indicated that the incident had been a weed burglary. In a press release issued this morning, the Mendocino County Sheriff’s Office explained that they had responded to a call from a cannabis farmer who claimed to have been burgled of about 20 lbs. of weed by four men, one of them carrying an assault rifle.

According to the release, the farmer found that the trimmed weed, which had been stored in a shed, was missing, and followed some tracks to a meadow on the property where they saw four men, described as Hispanic. He said that one was carrying “what he believed to be an assault type rifle.” The incident took place near the 53000 block of North Highway 101.

Deputies, canine units and portions of the Mendocino SWAT team, along with CHP officers, did a search of the property, but found no suspects and no evidence leading to anyone. The MCSO is asking for tips and information in this case that could lead to the arrest of the alleged burglars. If you have any information contact them at 707-234-2100 or by e-mail at [email protected].

According to the press release, the crime the sheriffs are interested in is the burglary. Sources close to farmers who were robbed, stated that the cannabis farm was a legal and compliant, or at least on the road to being so–and the fact that the MCSO is treating this as a burglary, and that the farmers called law enforcement to report stolen marijuana, seems to confirm this.

If this is the case it marks something of a Mendocino milestone in the road to full legalization and normalization–a moment when weed farmers felt secure enough in their legal status to call the police.

Here is the story from yesterday:

And the full press release:

Crime/Incident: Burglary, vandalism and possession of a firearm (assault weapon)

Deputies from the Mendocino County Sheriff’s Office (including a Canine team and elements of the Sheriff’s Office SWAT team) and personnel from the California Highway Patrol conducted an extensive search of the area in an effort to locate the suspects in this case. No suspects were located nor was there any evidence located which would lead to the identity of the suspects in this case.