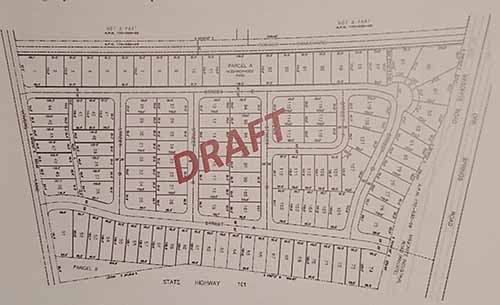 A draft of the proposed Lovers Lane project

(Editor’s note: This story was written on May 19 but it’s publication was delayed).

UKIAH, 5/24/2017 — Two developers hoping to build a subdivision on Lovers Lane just north of Ukiah met with members of the Community Health Improvement Project housing committee on May 18 to answer questions about their proposed project.

Doug Guillon and Steve Honeycutt, of Guillon Construction, Inc., have begun spreading the word about Vineyard Crossings, a proposed 24-acre development, to be situated on land currently zoned for agricultural use, at 156 Lovers Lane, where they would like to build 121 single-family units. According to materials provided by the company, lot sizes would range from 4,500 to 11,000 square feet. The three to four-bedroom homes would be 1,234 to 1,762 square feet. The men said they were considering putting duplexes on corner lots, and possibly including additional dwelling units. The plans include a .4-acre park and two new access roads from Lovers Lane. Streets within the subdivision may be wide enough for some on-street parking. While the exact prices of the units have not yet been calculated, Honeycutt said he was hoping to sell them in the $350,000 range, though the duplexes could be in the $250,000 to $275,000 range. According to the U.S. Census of 2015, the median household income in Mendocino County was $42,980. Per capita income was $24,059.

Asked about the possibility of putting in less expensive condos to address the needs of county residents earning the median income, Guillon said that this type of housing situation often involves homeowners associations, which he believes are prone to filing class-action lawsuits. He did not provide specific examples, though the Mendo Voice and a county employee asked about the issue. He suggested that a city maintenance district, paid for with property taxes, could be formed to address the maintenance needs of the development. 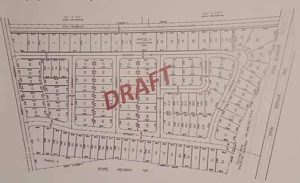 A draft of the proposed Lovers Lane project

“Where that bumps up against is we still have a lot of ag land and we still need workers for that ag land and that’s what makes up the majority of the population here,” said Maya Stuart, of the county’s Health and Human Services Agency. Honeycutt hinted at the possibility of addressing those needs in a fourth or fifth project in the area. He said he was “looking at” infill development in urban areas and housing in Hopland. Mike Palleson, of Rural Communities Housing Development Corporation, a non-profit building company, said he was looking into partnering with Guillon on building housing units in Hopland.

When he was asked if it would be feasible to loosen up some of the zoning in the county, Guillon said he “had the sense that county staff was open to it.” At a Board of Supervisors General Government committee meeting last week, county CEO Carmel Angelo said she was meeting with the developers on Tuesday, May 9. The two men declined to say if they had received their impression from Angelo at that meeting, though Honeycutt said he had spoken to staff and some supervisors who seemed receptive.

Opposition to the project is forming, though. At noon on Tuesday, May 23, a group called Save Lovers Lane Vineyards will meet in the NCO conference room at 413 North State Street in Ukiah.