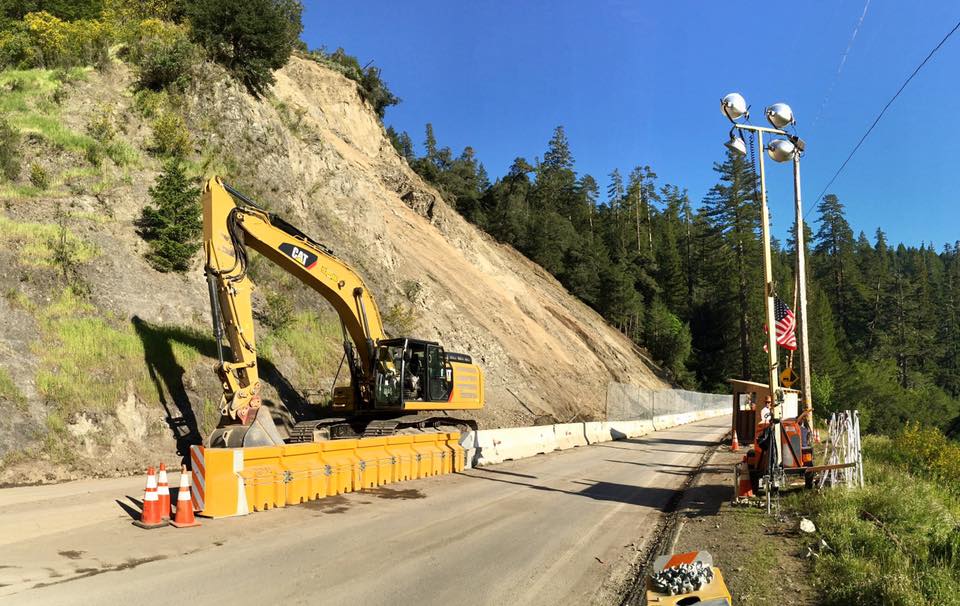 MENDOCINO Co., 5/3/17 — Highway 101 has been open again for five days, this time, hopefully for good. Shortly before 5pm on Friday April 28, a few hours before anticipated, CalTrans re-opened the 101 to traffic between Mendocino and Humboldt counties, after clearing the third landslide on the same slope in a few weeks. Four days earlier, on Tuesday, April 24, CalTrans had re-opened the same stretch of road after a week-long closure — only to close it again when the slide became active after a mere 29 hours. 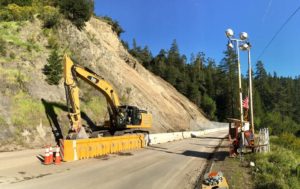 Currently one lane is open, although debris from the slide is still being removed, and a cage mesh system and fencing may need to be installed. Before the third slide occurred, CalTrans workers and contractors Ghilotti Construction removed more than 18,000 cubic yards of debris in more than 2,241 truck loads, and workers continue to clear the cliff face of debris and remove it from the area. Motorists can expect delays up to 30 minutes due to ongoing work, and it may be months until both lanes are fully clear.

Some of the surface material on the cliff remains active, and it can be hard to predict mother nature. But CalTrans’ geologists and engineers have determined the area is safe for passing motorists, and they are hopeful the slide has settled.

The slide happened about six miles north of Leggett on a major artery for which few alternative routes exist. Many of these roads were closed to the general public during landslide repair. Travelers were forced to take the long way on Interstate 5, turning a three hour trip into easily six hours, resulting in significant impacts to local businesses and residents.

At the scene of the slide, as Friday’s first group of commuter vehicles passed on the road, happy drivers yelled their thanks out of their car windows at the workers and contractors on their way to Humboldt. Another line of cars waited near the Peg House, where owners handed out their famed ‘Never Don’t Stop’ bumper stickers to those excited to get back on the road heading north. CalTrans’ Dan Bornman, Area Construction Engineer, was on site at the highway’s re-opening, and he explained just what it took to get the road back open.

Bornman and the contractors were tired after several weeks of intense work clearing the slide, and yet their work is by no means completed. Prior to the last slide, CalTrans had estimated that at least 25,000 cubic yards, including some large boulders, would need to be cleared before the road re-opened. Bornman said that so far, contractors had removed 2241 truck loads of debris from the road. That figure that doesn’t include the materials cleared from the most recent slide, nor those that fell past the road and onto the river back, or into the river.

There is also an unknown amount of debris that remains on site: what slid over the highway towards the river bank, a “spoils pile” sitting between the rock and safety fence adjacent to the highway, and what dirt and scree remain sitting on the mountainous rock face itself, which still needs to be cleared. CalTrans has been working with contractors Ghilotti Construction to clear the slide material, with several subcontractors operating heavy equipment on top of the cliff face.

Bornman explained that on jobs such as these, similar to what’s known as a “free account project,” CalTrans works collaboratively with contractors such as Ghilotti and their subcontractors. Based on assessments made by CalTrans engineers, he said, CalTrans staff directs the contractors as to the work plan and what equipment will be needed.

The slide fully covered both lanes and brought debris down the Eel River banks, requiring CalTrans had to bring in equipment from across the state to clear the road. A Chinook helicopter from San Diego was used to deposit specialized digging equipment atop the hillside. A spider excavator, operated by a San Luis Obispo company, and several bulldozers were airlifted into place.  Chinook helicopters are mainly used for military purposes, and relatively few are in operation for civilian use creating substantial demand. This particular copter had only a three day window available to help with the operation, yet despite ongoing rain storms CalTrans was able to get the equipment up on last Sunday, after a space was cleared at the top of the slide.

The operation was staged at the junction of Highway 101 and Route 1, which CalTrans also recently re-opened after a nearly two month closure from a different landslide. The equipment carried by the Chinook almost maxed out its carrying capacity, so the helicopter carried very little fuel while lowering the equipment. The operator climbed up the slope via rope to use the excavator to begin clearing material.

In order to keep the road open, workers have been onsite day and night, although work has stopped several times when the slide became re-active. CalTrans stopped work on Wednesday to protect worker safety, but was able to open a lane for emergency vehicles Thursday night. “Things have been changing by the day, or the minute,” remarked Bornman as to the slide’s continuing motion. Parts of the slope are still crumbling with dirt that remains to be cleared. Two spotters are stationed on site, one at either side of the slide, blasting horns any time debris begins to move as a warning to both workers and passing motorists.

“It’s not necessarily a threat,” said Bornman of the continued rock movement, but the horns are sounded when any movement is spotted. At least 14 trucks each day and 7 each night full of workers have been stationed at the slide’s north end. In the next several weeks, workers will continue removing dirt and serving as spotters, as the spider excavator climbs down the face, using a mechanical scaling attachment to smooth out the rock face after the debris layer is removed. CalTrans hasn’t yet determined the timeline for removing the additional debris material with ongoing traffic, since it’s not yet clear how much remains on the slope.

Bornman hesitated to speculate as to when the road will re-open to two-way traffic, but he emphasized CalTrans will continue to maintain a steady traffic flow while continuing repairs. Unlike the 299, which was closed to traffic except for brief windows due to a slide earlier this winter, Bornman said traffic on the 101 should remain steady. “Being a lifeline to the North Coast, we can’t do what we did on the 299, it’s too important of a route,” he said.

Once the extra debris is cleared, CalTrans will install additional safety protections are necessary between the rock face and the road, such as a permanent protective rockfall fence akin to one located a few miles south. According to CalTrans District 1 Public Information Officer Eli Rohl, about five weeks prior to the recent slide a stronger catchment fence was installed in the area due to an emergency project, meaning the current fence is about five times the average strength. It could take months before both lanes and open, and the highway may need to be repaved after damage from falling rocks, Rohl said.

Another significant slide that damed the river in 1979 took place only a few hundred yards from the current one, which can be seen in historic photos that CalTrans posted on Facebook during the road’s closure. “I think they called that ‘Carl’s slide,’” said Bornman, noting the region is “very geologically active,” He explained that the “failure plane” of a landslide “tends to be very well defined” and that the current slide doesn’t seem to be threatening the stretch where the earlier slide occurred.

CalTrans will be continuing work on this slide, said Bornman, but he’s also been busy handling a variety of slides and road closures in the area from Eureka to Bell Springs Road. He recalled that at one point this past winter more than half of CalTrans’ repairs were located in his region, 30 miles on either side of the county line. “It’s just been getting hammered down here” he noted.

You can see our previous coverage of the landslide here, and check out the nationally viral video of the most recent slide here.