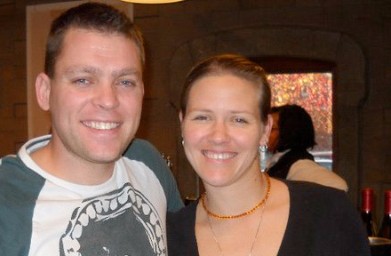 Georgeanne Croskey and her husband. Picture from her veterinary practice's website. 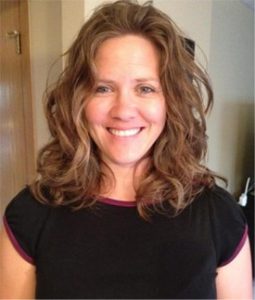 She also said that she will be continuing her veterinary practice simultaneous with her job as supervisor. Adding, “I will have to obviously pare it down.”

While she is being sworn in tomorrow, she does not plan to attend next week’s board of supervisors meeting, given that she has already scheduled animal surgeries for that day, noting that, “Obviously this came about kind of quick…I do need a little time to switch my life around”

Croskey is a large animal vet, operating her own practice out of Willits, but covering the whole area. Given that she is not giving up the practice, she pointed out that she’ll either need to see fewer people or bring on a partner.

MENDOCINO CO., 5/09/17 — Georgeanne Croskey has been appointed to the position of Mendocino County District 3 supervisor by Governor Jerry Brown. The announcement was made public through a press release at about noon today. Croskey, 38, will serve out the term of former supervisor Tom Woodhouse, who resigned in December, after having been absent since late August. District 3 of Mendocino County has been without effective representation for about eight months. Her term will expire in 2018, at which time elections will be held as normal. It is unclear when she will be officially sworn in, but Croskey has already expressed eagerness to begin working with and listening to constituents.

Croskey is a veterinarian, currently running her own large animal practice. She is also a member of the board of trustees of the Willits Unified School District, having been appointed to that body, after current Willits City Council-member Saprina Rodriguez resigned.

She served in the Air Force for five years, including as an intelligence officer, and graduated with a B.S. in physics from Miami University in Ohio, and after the Air Force obtained a veterinary degree. In 1996 she was the Willits Frontier Days sweetheart.

In a brief interview today Croskey expressed her excitement, gratitude, and commitment to working with the district, “I am very excited and I am honored by this appointment. I look forward to meeting with members of my district to discuss all their needs and concerns. I look forward to meeting with the board of supervisors and getting up to speed on everything they’re working on.”

Asked about her stance on specific issues currently facing the county Croskey mostly demurred, saying that she would now begin the process of reaching out to her constituents and listening to their concerns.

“At this point I don’t want to speak for the board before I have more information, I’m not privy to a lot of closed-door discussions. And I have a lot of work to do to get some more background information before I come out with my positions on issues.”

It is unclear what “closed-door discussions” she is referring to — supervisors are mandated to discuss all issues in open meeting, by the notoriously tough Brown Act.

On the issue that has most intensively occupied the board, cannabis business licensing, Croskey said, “I very much support the board of supervisors and the direction that they have been taking.”

However, on the issue of 3rd District representation, more generally, Croskey said, “I think that this is where me going to each of the communities within District 3, and speaking to them, and seeing where they have felt they have not been represented is. There are many issues that the board has dealt with that are issues throughout the entire county, and there are some things that they have had to deal with that are just District 3 — hopefully people are going to be excited that they have a representative again and they have someone they can go to, and talk to, and that’s available to them.”

She also stated that she has not yet spoken to county government staff, or the other members of the board, given how recently the announcement was made. Though the appointment was made today, a formal swearing in has not yet occurred, and might not for some weeks. County government staff have said that they do not have additional information about the appointment or a timeline for swearing in, at this time.

Former Willits mayor, Holly Madrigal, who has been another one of the front-runners in the selection process, said, “I wish the 3rd District the best of luck.”

We’ll be updating this post with more information throughout the day, as reactions come in.

The position pays $61,200 and does not require California Senate confirmation.

The press release is below:

Georgeanne Croskey, 38, of Willits, has been appointed to represent the third district on the Mendocino County Board of Supervisors. Croskey has been a veterinarian at Mendocino Equine and Livestock since 2012. She was an extern at the Ohio State University Veterinary Medical Center from 2008 to 2010, veterinary assistant at the Paws Inn Animal Hospital from 2005 to 2006 and a captain in the U.S. Air Force from 2000 to 2005. She earned a Doctor of Veterinary Medicine degree from Ohio State University. This position does not require Senate confirmation and the compensation is $61,200. Croskey is registered without party preference.

V. Manny Perez, 44, of Coachella, has been appointed to represent the fourth district on the Riverside County Board of Supervisors. Perez has been chief government and public affairs officer at Borrego Health since 2015. He served as an Assemblymember in the California State Assembly from 2008 to 2014 and was director of community health and advocacy at Santa Rosa Del Valle-Borrego Health from 2004 to 2008. Perez earned a Master of Education degree in administrative planning and social policy from the Harvard Graduate School of Education. This position does not require Senate confirmation and the compensation is $153,289. Perez is a Democrat.