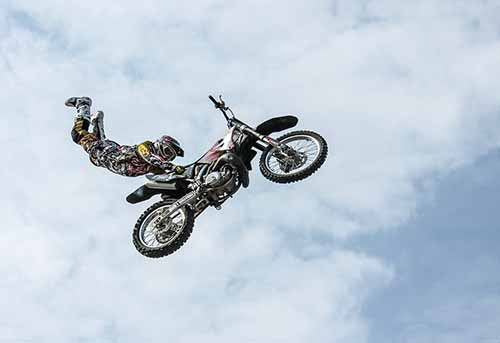 MENDOCINO Co., 4/25/2017 — May is motorcycle safety awareness month. Here are some tips and statistics from the California Highway Patrol:

With warmer weather on the way, motorcycle riders will be gearing up and taking to California’s roadways. The month of May is recognized as Motorcycle Safety Awareness Month. The California Highway Patrol (CHP) and the California Office of Traffic Safety (OTS) will work together all month long to help reduce the number of motorcycle fatal and injury collisions and to promote roadway safety through education and awareness. California Department of Motor Vehicles data reports there are over 884,000 registered motorcycles and more than 1.4 million licensed riders. Throughout the spring and summer, the number of motorcyclists on the road will increase. Creating a safer highway environment is the shared responsibility of drivers and motorcyclists alike. This is achieved by staying alert and using common sense and courtesy while on the road. “No matter how you travel on California’s roadways, safety should always come first. Motorcyclists and drivers both share equal responsibility for roadway safety,” said CHP Commissioner Joe Farrow. “Motorcyclists are sometimes hard to see and are more vulnerable to collisions than other drivers. Be alert, share the road, and look twice for riders.” According to preliminary data from the CHP’s Statewide Integrated Traffic Records System, last year 476 motorcyclists were killed in traffic collisions and more than 14,000 others were injured. In 2015, there were 494 motorcyclists killed and more than 13,500 injured. Riders can help protect themselves by always using turn signals, avoiding riding in a vehicle’s blind spot, following the rules of the road, and always riding sober. Wearing an approved U.S. Department of Transportation compliant motorcycle safety helmet and proper protective gear can mean the difference between life and death. Motorists can also do their part by sharing the road. The majority of multi-vehicle motorcycle collisions are caused when other drivers simply did not see the motorcyclist. It is important for motorists to understand the safety challenges faced by motorcyclists such as size and visibility. Look twice for motorcyclists and leave plenty of space between your vehicle and the rider. -MORE- An Internationally Accredited Agency “With great weather and scenery, California has always been a state where motorcycling for recreation and commuting takes place virtually year-round,” said OTS Director Rhonda Craft. “But both riders and drivers must be constantly aware of the dangers. We all have to be mindful of every vehicle around us and share the roadways with safety in mind.” The CHP realizes that traffic collisions can happen to anyone, regardless of their skill level, which is why the CHP strongly encourages all riders, new and experienced, to enroll in the California Motorcyclist Safety Program (CMSP). The CMSP was developed in July 1987 and has 120 training sites throughout the state. The CMSP trains approximately 66,000 motorcyclists per year, and as of 2016, the CMSP has trained more than 1 million motorcycle riders. For more information or to find a training site near you, visit californiamotorcyclist.com. “The CMSP’s mission is to make motorcycling safer by reducing the number of riders killed or injured every year through continued training and education,” said Commissioner Farrow. As part of Motorcycle Awareness Safety Month, the CMSP and the CHP unveiled a new media campaign, which includes public service announcements that will be broadcasted on radio, television, social media, and billboards throughout California. The mission of the California Highway Patrol is to provide the highest level of Safety, Service, and Security to the people of California.