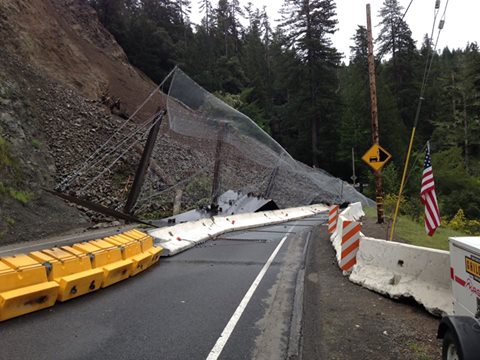 A picture of the slide near Leggett, courtesy of CalTrans.

WILLITS, 4/17/17 — The reoccurring landslide, north of Leggett on the 101, has once again closed the North Coast’s major transportation artery. CalTrans is stating at this time that they hope to have the road reopened by Wednesdays, but that it’s unlikely it’ll be opened any earlier.

There is no local detour. The Bell Springs Rd. has been closed to non-local traffic, to keep semis off, which had apparently become a problem after the last Confusion Hill slide.

Here is what CalTrans more recently posted on Facebook:

We’re now estimating that U.S. Highway 101 north of Leggett in Mendocino County may reopen to one-way traffic sometime on Wednesday, April 19. It is unlikely that the road will reopen before then.

A photo from farther back shows the scale of the slide in relation to the roadway and offending hillside.

Staff on-site has relayed that there is more slide material hanging above the road which has yet to come down.