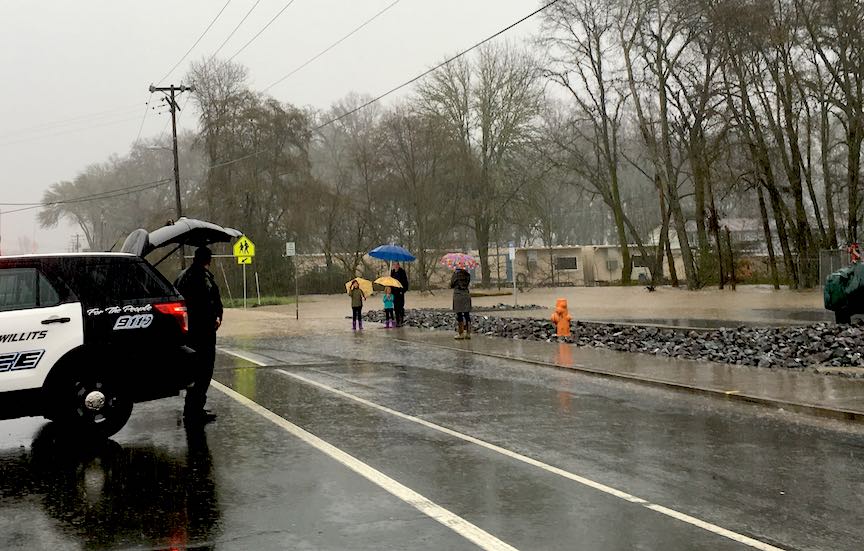 MENDOCINO Co., 3/07/17 — In the wake of the recent storms, and storm damage, the county is requesting information about where repairs are needed. Today, Lt. Shannon Barney of the Mendocino County Sheriff’s Office in conjunction with the county’s office of emergency services announced that the county is formal seeking storm damage reports, known as “initial damage estimates,” which are reports submitted by smaller governments, like cities, special districts, and tribal governments, used to officially apply for emergency funds. These reports will help the county allocate funds that have been made available through state and local declarations of emergency.

Both Governor Jerry Brown and the Mendocino County Board of Supervisors have declared a state of emergency for Mendocino County, along with much of the state of California, after the deluge that has been January and February. The governor’s declaration frees up the state Office of Emergency Services (CalOES) to make funds available to local governments. Last month he requested that President Donald Trump declare a federal state of emergency, which the president did, and today he asked for one more declaration. These presidential declarations authorize the Federal Emergency Management Agency (FEMA) to make public assistance funds available. (Ain’t federalism great?!)

To start, the county is assessing storm damages, and deciding how much funding is needed in what locations. Mendocino County OES is primarily seeking data from local governments, special districts, and tribal governments, which are all eligible to apply for funds.

Individuals and private businesses are not eligible to apply for assistance, but the county is still requesting reports from them to see what areas have been hit the hardest, and where funding is most needed. According to the press release, “this will aid Mendocino County OES in determining which areas were most affected by the winter storms and could possibly make assistance, such as low interest loans, available to private residents and businesses if economic losses are higher than previously reported.”

This may seem like a couple extra hoops to jump through, but they’re an important part of government bookkeeping. Declarations of emergency are formal ways of suspending the rules that often make bidding, contract awarding, and grant approval a slow, but transparent process. For instance, in some jurisdictions governments are required to hire the contractor with the lowest bid, but during a state of emergency can instead hire the fastest, or more ready contractor, even if it’s more expensive. Likewise, grant applications can be tedious and time consuming, but during a state of emergency they may be streamlined.

The full press release from Lt. Barney and the Office of Emergency Services, and from Governor Brown’s office are below, including links to the Initial Damage Estimate form on the county website and contact information. These should be submitted as soon as possible.

Like many other California Counties the County of Mendocino has been hard struck by winter storms this season. As a result, the County of Mendocino proclaimed a Local Emergency on January 18, 2017 related to storm damage. This proclamation has been extended several times by the County Board of Supervisors.  California Governor Brown declared a State of Emergency on January 23, 2017 for 49 California counties, including Mendocino County. Upon a FEMA recommendation President Trump  declared a Major Disaster Declaration on February 14, 2017.

Currently, the California Governor’s Office of Emergency Services (Cal OES) and the Federal Emergency Management Agency (FEMA) have made available some Public Assistance funding.  This Public Assistance funding is being made available to state, tribal, and local governments, to help assist with eligible emergency protective measures and repairing/replacing damaged public facilities and infrastructure.

At this time, Individual Assistance, which assists individuals, private property owners, and businesses has not been made available.

If agencies, residents or businesses have any questions regarding Initial Damage Estimates they should email the Mendocino County OES a t[email protected]

For more information regarding Public Assistance or Individual Assistance, offered by the State and Federal Governments, please visit:http://caloes.ca.gov/cal-oes-divisions/recovery.