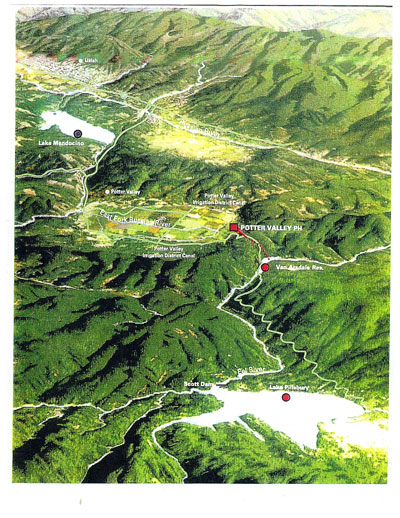 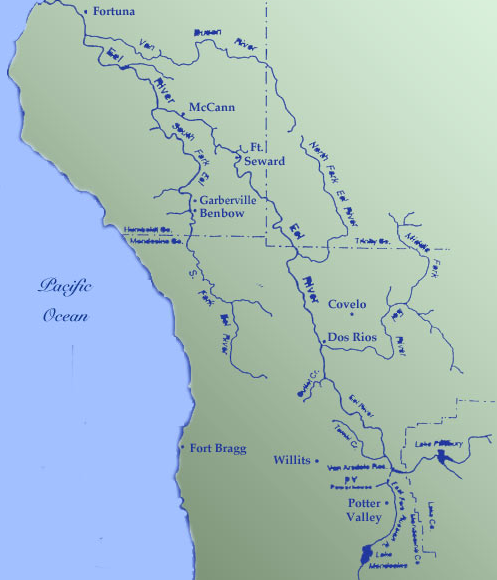 A map of local watersheds – from the Potter Valley Project website

UKIAH 3/10/2017 —  The time is drawing near for PG&E to apply for a new federal license for the Potter Valley hydroelectric project, which has been generating power and providing water to farmers from Mendocino to Marin for over 100 years. The five-year process of applying for the license will include several opportunities for public input. The last fifty-year license, issued in 1983, was retroactively dated to 1972, which is why PG&E, which owns the Potter Valley facility, is working towards obtaining a license from the Federal Energy Regulatory Commission (FERC) by 2022. Last week, on March 9, an informational meeting about the process took place at the Ukiah Conference Center, the first of many meetings and discussion about the project, at which the public will be allowed to give input.

Though originally built as a hydroelectric project in the early

1900s, the amount of power generated by the project is now considered fairly small. Still, the tunnel serves an important role in the water infrastructure of the North Coast.

Like many water projects in California the  Potter Valley hydroelectric project involves multiple agencies, counties, and private entities, some with competing interests. It’s described as an “inter basin diversion,” since it moves water from the Eel River Watershed into the Russian River Watershed. It also involves several counties, given that Scott Dam and Lake Pillsbury, the reservoir it created, are located in Lake County. The Cape Horn Dam and the Van Arsdale Reservoir, a diversion tunnel that redirects water from the Eel River to the Russian River, and a powerhouse that generates 9.4 megawatts of power, are in Potter Valley. The Potter Valley Irrigation District has a contract with PG&E to use some of the diverted water for agricultural purposes. Some of the water also flows into Lake Mendocino, which is managed by the Army Corps of Engineers, for flood control purposes, and the Sonoma County Water Agency, which has water rights to the contents of the lake. Many water rights holders along the Russian River from Mendocino to Marin have come to rely on water supplemented by the Eel River flowing through the tunnel, though environmental groups and some Native American tribes would like to see the dams and the diversion tunnel removed.

Stakeholders with varying points of view were present at the meeting in Ukiah. They included members of the Potter Valley Irrigation District board and Friends of the Eel River, leading members of the Wiyot and Round Valley Indian tribes, First District Supervisor Carre Brown, and representatives from governmental resource management agencies, such as the Forestry Service and California Fish and Wildlife. Paul Kubicek, a biologist with PG&E, Susan Kester, the project manager for PG&E’s relicensing efforts, and Ed Bianchi, a project manager with Cardno, Inc., the consulting company working with PG&E to help with the application process, gave presentations and took questions.

Doug Hutt, treasurer of the Round Valley Indian Tribe, said after the meeting that his tribe was opposed to re-licensing the project, but that he was unwilling to discuss strategies for fighting it, “in case it ends up in court.”

Ted Hernandez, Chairman of the Wiyot Tribe, which has territories along the Eel River in Humboldt County, explained that the Eel River “holds our water, our life source,” and that he has been “coming to these meetings, talking to our cousin tribes,” about his view that the facility should be decommissioned.

David Keller, the Bay Area director of Friends of the Eel River, a non-profit organization with the stated goal of decommissioning and removing the Potter Valley hydro project, asked the first question during the meeting’s question-and-answer session. Keller, who is not confident in the safety of Scott Dam, stated that several documents relating to the project are categorized as “CEII,” or Critical Energy Infrastructure Information. Because these documents are not available for the public to use in assessing the project and commenting upon it, he said, “It’s hard for us to understand what is or is not available and what needs to be studied or isn’t studied…are those going to be made available to the public early in this process so we can evaluate what data there is and isn’t?”

Kester replied that “If they’re designated CEII it’s for a reason…it’s a security sort of priority.” She added that many reports are publicly available from the Division of Dam Safety. Bianchi remarked that “The relicensing process doesn’t look at the totality of the whole process. It really looks at routine operation and maintenance of the project.” However, after two more members of the public mentioned dam safety, Bianchi conceded that “The world’s changed a little bit since Oroville,” referring to the Oroville Dam, where a spillway failed in February, leading to mandatory evacuations in three counties.

Dennis Smith, a biologist with the U.S. Forestry Service, pointed out that earlier this year, PG&E chose not to pursue re-licensing the 26.4 megawatt DeSabla-Centerville hydroelectric facility, in part because it is cheaper to generate electricity using wind and solar. After the meeting, he said he suspects that PG&E is “going through the motions” of re-licensing, and that “The only reason I can think of is to find another buyer.”

During the meeting, he asked Kester if the company was prepared to “Spend maybe $15 million to re-license a project that may not be economical?”

Kester replied that “At this point the decision is to re-license the project. That’s correct.”

*There will be several opportunities for public comment during the process of relicensing the hydroelectric project. Interested parties can go to https://www.ferc.gov/docs-filing/esubscription.asp  to sign up for email notifications about the Potter Valley hydro project. Go to e-subscriptions and click ADD for Docket #77, which is the FERC designation. PG&E is also scheduled to have a relicensing website, with documents and a calendar, available in April. The first opportunity for public comment will be in July, after PG&E files its pre-application documents, notice of intent, and initial scoping documents.