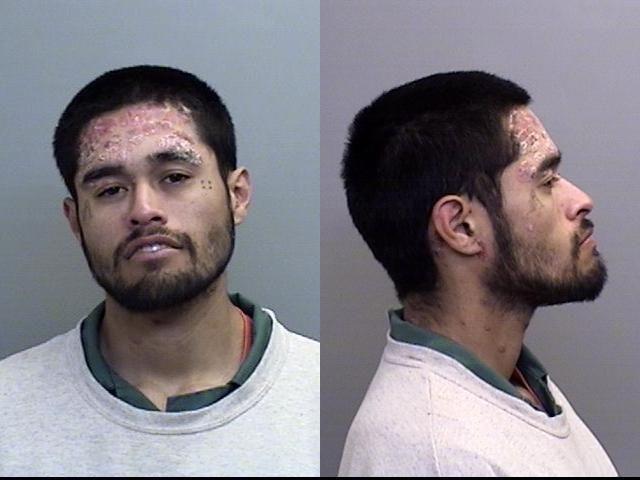 MENDOCINO Co., 3/22/17 — Jeffrey Joaquin, 22, who allegedly fired a shotgun at a Round Valley tribal officer, then fled, only to be captured, has been booked at the Mendocino County Jail on the following charges: assault with a deadly weapon, use of a firearm during the commission of a felony, possession of a firearm with the intent to commit a felony, possession of a short barreled shotgun, and with an additional “enhancement” for allegedly committing this crimes while being in “post-release community supervision,” and for having a warrant. He is being held without bail. 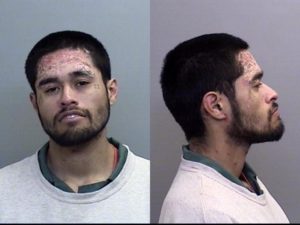 In an updated press release, the Mendocino County Sheriff’s Office provided additional details. In an incident yesterday, tribal officers responded to an address on Refuse Rd. in Covelo. Someone had called in saying that Joaquin was on the property and armed. Upon arrival the officers told Joaquin to drop his weapon, at which point he allegedly fired on one officer, though only struck him lightly with a pellet of bird shot. The officer returned fire, but did not strike Joaquin.

Joaquin fled, and was later apprehended. He had been in the news recently for a separate incident, in which he was shot in the torso, and taken to Howard Hospital in Willits, but then refused to say who had shot him, or co-operate with detectives.

He was apparently taken to the hospital yesterday, for a “medical clearance” prior to being booked, due to difficulty breathing, perhaps related to his prior wound.

In various posting on social media Covelo residents who apparently knew Joaquin growing up have expressed sadness and frustration over the incident, and how it reflects on conditions in Covelo and Round Valley generally.

On 3/21/2017 around 1600 hours the Round Valley Indian Tribal Police received an anonymous tip that Suspect Jeffery Joaquin was at a residence in the 25300 Block of Barnes Lane, in Covelo.  Several Tribal Officers responded to that location where they demanded Joaquin exit the residence and surrender himself.  Joaquin exited the residence and was taken into custody.  He was later transferred to the custody of the Mendocino County Sheriff’s Office.  Joaquin was taken to a hospital for medical clearance prior to being booked into the Mendocino County Jail, after experiencing difficulty breathing.  This clearance was not related to the shooting as he was not injured during this incident.  He had been involved in a different incident on 2/7/2017 where he was shot in the torso, by an unknown assailant, but refused to cooperation with law enforcement during that investigation.Joaquin was transported and booked into the Mendocino County Jail on the listed charges. He is being held on with no bail due to his status of being on PRCS (Post Release Community Supervision) and having an outstanding warrant for his arrest, at the time of the incident, for violation of the terms of his PRCS.  He refused to provide a statement in this case so the motivation behind the assault is not known.

______________________________________________________________
On 03/21/2017 around 10:20 AM the Mendocino County Sheriff’s Office received a report from the Round Valley Indian Tribes, Tribal Police that they had responded to a report of an unwanted and armed subject in the 22500 Block of Refuse Road in Covelo.  The report to their agency was phoned in by a home owner, living on the Reservation, who advised the suspect, 22 year old Jeffery Joaquin, was armed and Tribal Police were requested to remove him.Around 10:00 AM two Tribal Police Officers responded, one at the front of the residence and one in the rear of the residence.  The Officer in the front of the house observed the suspect in the driveway as he approached and saw that he was armed with a shotgun.  The Tribal Officer exited the vehicle with his duty issued shotgun and demanded Joaquin “drop his gun”.  According to the Officer, Joaquin fired one round at the Officer with what appeared to be “birdshot”.  The Officer returned fire, shooting two times at the suspect who had hidden behind a vehicle.  Witnesses yelled at Joaquin to drop the firearm at which time he did.  He removed his shirt and placed his hands into the air, as if to surrender, before fleeing in a west bound direction on foot.  He was last seen westbound when the Tribal Officers lost sight of him.The Tribal Officer appeared to have been struck with at least one pellet in the face but it did not break the skin as the distance between the two was approximately 50 feet and the energy of the birdshot appeared to have dissipated.  It is unknown if Joaquin was struck or injured by rounds fired by the Tribal Officer.

The Mendocino County Sheriff’s Detective Unit responded to investigate the case.  Joaquin is currently being sought for questioning related to this case.

Joaquin is described as being 5’08” tall, weighing approximately 175 pounds, having black hair and brown eyes.  He was last seen wearing dark colored jeans with no shirt.  If anyone has information about the where abouts of Joaquin please contact the Sheriff’s Office Dispatch Center at 707-463-4086.