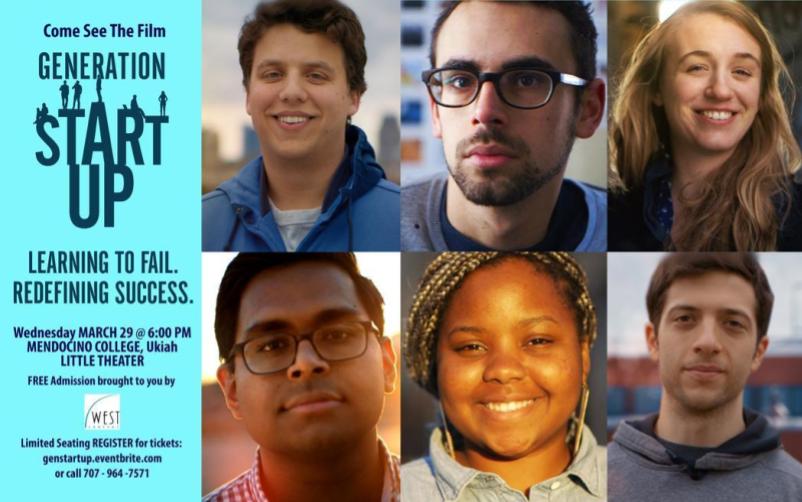 MENDOCINO Co., 3/29/17 — Are you considering starting your own business and feel like you need some advice, or inspiration? West Company, Mendocino County’s economic development organization, can help, and tonight they’re screen a film about young entrepreneurs that might give you some inspiration too. The film is being shown at

Starting your own business is rarely easy. You may be working late into the night and on until morning for many years, but the benefits of developing your own business, and being your own boss, can be significant. Here at The Mendocino Voice, we’ve experienced our fair share of both the challenges and the rewards since launching our new online newspaper in September — and we’re just getting started! Every day we learn something new about how to do a better job at covering local issues, and we hope we can keep improving. From the beginning, we’ve had assistance from West Company, a non-profit economic development organization that helps small businesses in Mendocino get on their feet.

If you’re considering starting your own businesses, or want to know more about the struggles and successes that can entail, West Company is hosting an panel and film screening Want to know what advice would local business owners have to share, and what they would do differently if they could start it all over? This Wednesday, March 29 in Ukiah, a panel of local business owners will give an overview of their experiences starting different businesses in Mendo, ranging from the new food magazine Word of Mouth to the well-established Rainbow Ag. The presentation will be accompanied by a film screening of “Generation Start Up,” which examines the experiences of young entrepreneurs trying to get their ideas off the ground and their businesses to financial stability.

The event is organized by the non-profit West Company, which provides small business consulting services, educational workshops, and other resources to support small businesses owners in Mendocino County. Panelists will include “Holly Madrigal, publisher of Word of Mouth , Jim Mayfield owner of Rainbow Ag, Doug Ware, owner of Ocino, Inc. and Cynthia Ariosta, owner/chef of Saucy in Ukiah and the new Flying Saucy,” who will discuss the things that worked — or didn’t — to make their Mendocino-based businesses successful.

GENERATION STARTUP: A DOCUMENTARY FILM EXPLORING WHAT IT MEANS TO MAKE IT AS A YOUNG ENTREPRENEUR TO SCREEN AT MENDOCINO COMMUNITY COLLEGE

West Company is hosting a screening of GENERATION STARTUP, a documentary film that takes us to the front lines of entrepreneurship in America, capturing an in-the-trenches look at the struggles and triumphs of six recent college graduates who put everything on the line to launch startups in Detroit.

The film will be screened on March 29, 2017 at Mendocino Community College Little Theater and is open to the public.

The young men and women of GENERATION STARTUP are part of Venture For America (VFA), a program that sends recent college graduates to work at startups in fifteen cities around the country to train as entrepreneurs, and then helps them launch their own companies.

Despite the widely held stereotype of 20-somethings as entrepreneurs, entrepreneurship among 18-34 year olds is at a 24-year low.  “For our county, and country, to remain economically viable over the coming decade it’s absolutely critical that we inspire, encourage and support more individuals to embrace an entrepreneurial mindset.” says Mary Anne Petrillo, Executive Director of West Company. “We must nurture the growth of locally owned startups because they will become the cornerstone of economic development in Mendocino County and the new middle class of the 21st century.”

West Company is a nonprofit, economic development organization with a focus on providing microenterprises throughout Mendocino County, with education, and resources they need to build a thriving business in today’s rural economy. We serve our clients through customized one-on-one business consulting and training workshops. West Company hosts the Mendocino Small Business Development Center and Mendocino Women’s Business Center.

Following the film, a panel of local entrepreneurs will talk about their personal journey to building a business in Mendocino County. Panelists include: Holly Madrigal, publisher of Word of Mouth , Jim Mayfield owner of Rainbow Ag, Doug Ware, owner of Ocino, Inc. and Cynthia Ariosta, owner/chef of Saucy in Ukiah and the new Flying Saucy. The panel session will be recorded through a collaborative partnership between KZYX Radio and Mendocino Community College. The program will be broadcast on April 19 as the debut of a new KZYX public affairs program called Mendocino Works. This hour long biweekly public affairs radio program will bring together voices of the entrepreneur, the business leader, the community activist and the government administrator to discuss trends, strategies and personal stories in advancing the development of sustainable enterprises that contribute to the economic livelihood of Mendocino County.