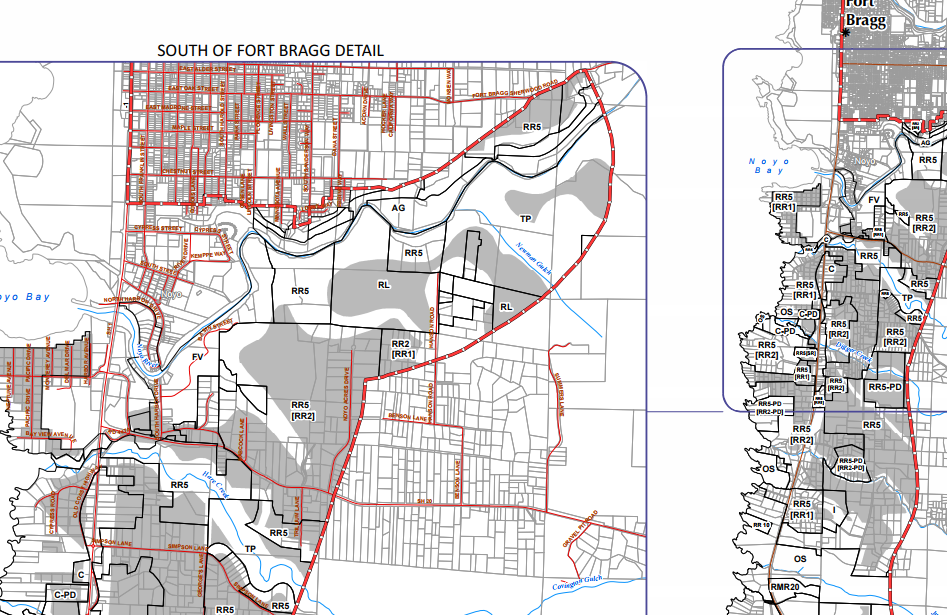 UKIAH 3/23/2017 — On Monday, the Mendocino County Board of Supervisors held a hearing in which they approved an increase in fees for the planning and building services and the health and human services agency (HHSA). They also took a few more steps towards crafting a zoning ordinance that would require formula businesses, defined for purposes of the ordinance as chains with more than ten franchises, to get a use permit to operate in some commercially zoned areas within the inland zoning district.

The board passed a new fee schedule which increased the fees for permits issued by Planning and Building Services (PBS) and the Health and Human Services Agency (HHSA). The most significant increases were imposed in the Coastal Zone, where fees for some types of building permits were quadrupled. After some discussion, the board agreed on charging $1,707 for a minor administrative permit in the Coastal Zone. This is significantly higher than the $690 fee applicants paid last week, but lower than the $2,768 the planning department asked the supervisors to approve.

HHSA proposed an increase in the tobacco relicensing fee for tobacco retail establishments, from $290 to $350. However, the bulk of the hearing was taken up with discussions about increasing fees at the planning and building department. Assistant CEO Alan Flora told the board that the current fee schedule is out of date, and that the proposed increases are based on the amount of time county staff spend to process permits, and the salaries of the people doing that work. He recommended that the board pursue a fee schedule which would fully recuperate the costs of operation, since Planning and Building Services currently receives a subsidy of $363,447 from the general fund.

Fifth District Supervisor Dan Hamburg remarked that the complaints he hears about the permit process have more to do with how long it takes, rather than how costly it is.

Former Planning Director Steve Dunnicliff, who is in the CEO’s office but assisted current planning and building staff with the presentation, suggested that, “We could bring in some Coastal Commission people to explain why certain things currently have the cost in time to review that they do.” County planning and building staff are continually at odds with the Coastal Commission over the lengthy review process in the coastal zone.

Gjerde maintained that the fee for the minor administrative permit was too high. He moved to adopt the proposed fee schedule, with the exception of that one fee, which he suggested should be doubled rather than quadrupled. Second District Supervisor John McCowen suggested splitting the difference, and the fee schedule passed unanimously.

Gonzalez told the board that an example of a formula business, or a chain with ten or more franchises, that fits into its unique surroundings is the McDonald’s in Fort Bragg, which passed the “character test” with some attractive architectural design features.

Kiedrowski specified of the future ordinance that “This isn’t a ban, it’s a use permit.” Business owners hoping to open a franchise on C1 (limited commercial ) and C2 (general commercial) property in the inland zoning code would not be prohibited from doing so, but would have to apply for a use permit, which they would not be guaranteed to obtain.

First District Supervisor Carre Brown provided an example of a possible scenario under the ordinance-in-progress, by asking if a feed store or a hardware store would be permitted to invite a Baskin-Robbins ice cream franchise to open a concession within the premises of the existing business. Gonzalez replied that this would be acceptable, as it would not affect the exterior of the building.

The supervisors weighed in with concerns from the municipal advisory councils (MACs) in their districts, though Hamburg expressed concern about the MACs’ becoming tiny political bodies.  “I can see a situation where a MAC could say, yeah, we want to be under this combining district, but a bunch of property owners could say hell no…I want the opportunity to sell my property to Kentucky Fried Chicken. This is kind of a taking of my private property right to allow a legal business to operate on my parcel.”

He added that Hopland, which is in his district, the Fifth District, had asked to be excluded from the ordinance, largely because they want to keep their options open in attracting a business to replace the Superette, a grocery store that closed recently. “I guess my new sensitivity is to the proliferation of MACs, which I support, but now these MACs become like mini governments and I just think we need to be clear that MACs do not have the power to decide whether or not their community becomes a party to this combining district.”

Brown alerted the board and county staff to the Redwood Valley MAC’s concern about the public receiving notice about any application for permits. Gonzalez assured the board that notices would be posted conspicuously, and ads taken out in all newspapers of circulation. MACs, the supervisor of the district, and owners of adjacent properties would also be noticed individually.

McCowen praised Gonzalez for keeping the public informed about the process of crafting the ordinance so far, noting that the only members of the audience consisted of a member of the grand jury, a reporter, and Dunnicliff. He took this to mean that “This ordinance is not a particularly controversial item.”

Brown, laughing, advised him to “Wait until the public hearing.”