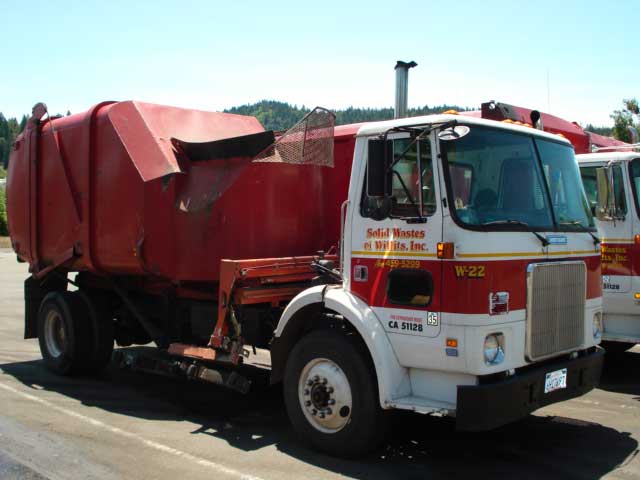 A Solid Waste of Willits garbage truck, from their webpage.

UKIAH 2/9/2017 — The board of supervisors recently agreed to grant Solid Waste of Willits, a privately owned company with contracts to run transfer stations and pick up garbage in Mendocino county, concessions that are expected to save the company nearly $300,000*. One of those concessions was closing the recycling buy-back centers in Gualala, Boonville, and Westport. What the board didn’t know was that closing the buy-back center in Westport would also trigger the closure of the transfer station, since there was no contractual agreement for SWOW to operate the transfer station in the first place. Now the board wants to explore options for reopening the Westport buy-back center, as well as one on the South Coast. “We’ve been here before,” remarked CEO Carmel Angelo at the Feb. 7 meeting of the board of supervisors, after one motion was withdrawn and another was scuttled on a 2-2 vote. No firm decision was made.

At the meeting Louisa Morris, the general manager of the Mendocino Solid Waste Management Authority, suggested the possibility of turning to Empire Waste Management in Fort Bragg to run the transfer station in Westport. The Waste Authority is a joint powers authority (JPA) formed by three cities and the county. It manages garbage contracts and programs to divert recyclables, hazardous waste, and yard debris.

The transfer station was important enough to one Westport resident that he sat through the entire day-long cannabis discussion to have a chance to deliver his comments to the board. Robert Scott, vice chair of the Westport Municipal Advisory Council, told the supervisors that closure of the station would require more than 300 residents to haul their trash all the way to Casper, a roughly one and a half hour drive. “Maybe their old truck won’t make it,” he said, and warned of the possibilities of increased illegal dumping and air pollution as a result. It doesn’t matter to him which business runs the transfer station, he concluded, “As long as they do it, and do it well.”

A brief but somewhat testy exchange among the board members followed. Fourth District Supervisor Dan Gjerde, who represents Westport, made a motion to amend the contract with SWOW so that the company would either operate a transfer station in Westport two days a week, or hand over that right, as well as curbside collection, to another contractor.

Fifth District Supervisor Dan Hamburg wanted to know what incentive SWOW had to serve the citizens of Westport, and asked who would pay for the service if another contractor took over. He also suggested reopening the buy-back center in Gualala, at Fish Rock.

Gjerde replied that he thought the over $200,000 in concessions were sufficient incentive, and that his proposal, which was the staff-recommended motion, would simply be an amendment. He hinted that he was not averse to playing “hardball” with the contractor.

“We haven’t been very good at playing hardball with this, frankly,” Hamburg retorted.

Angelo reminded the supervisors that they had retained the right to direct Jerry Ward, who is the owner of SWOW, to reopen the buy-back centers.

After Gjerde withdrew his motion, Hamburg made an alternate motion to reopen the buy-back centers in both Westport and Gualala.

Gjerde then suggesting directing Morris to explore options for reopening buy-back centers in Westport as well as one on the South Coast, saying he didn’t see the harm in trying to find out. The board expects to receive an update at its regular meeting on February 14.

*An earlier version of this article stated the amount incorrectly. The amount of concessions in the original offer was $287,986.