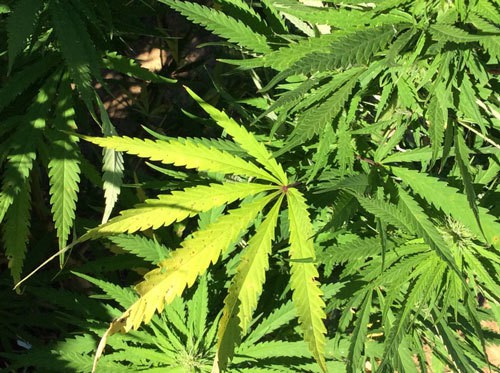 One of the more recent crops captured before legalization.

Editors note: This article has been somewhat updated for clarity.

UKIAH 2/17/2017 — Since August of last year, Mendocino County Board of Supervisors and staff have been struggling to create a regulatory framework for the cultivation of medical cannabis. Sacramento has provided their end of regulation passing a medical cannabis legislation (the Medical Cannabis Regulation and Safety Act, or MCRSA), and the voters approved Prop. 64, the Adult Use of Marijuana Act (AUMA). And the now the county’s work of filling in the gaps, and creating a local framework is close to completion.

Yet at the last board of supes meeting on Valentine’s Day, though substantial grower buy-in has been achieved and with the planting season nearing, negotiations erupted into open conflict. Lines were drawn along regional differences, with Undersheriff Randy Johnson and eastern Ukiahans asking for a maximum of six plants under an ordinance that would regulate recreational marijuana under Prop 64. While medical marijuana is currently regulated under Chapter 9.31 of the county code, a new chapter, 9.30, proposed by the county counsel’s office, would regulate plants intended for recreational use. Johnson encouraged the board to consider a six-plant limitation as opposed to 25 under the proposed new chapter. With the state law allowing six plants per residence and the county ordinance allowing 25 per parcel, Johnson explained that he was “Just looking for some clarity.” The Ukiah Area Rural Residential Concerned Neighbors submitted a letter asking the board to “Please consider revising current law to adopt a limit of six plants per parcel…”

In a separate cannabis cultivation item, Supervisor Dan Gjerde, who represents the northern coast of the county, took issue with the county’s medical cannabis cultivation ordinance process, which has ignored large swathes of the coastal region. The future of coastal growers was still uncertain after last week’s clarifications. Tuesday, tensions flared when Gjerde declared that he considered provisions that could prevent many coastal growers from going legal were a “dealbreaker.” The ordinances will be revisited again, and then possibly yet again, with a special meeting scheduled for March 28.

As the state has layered on new laws, the issue of marijuana regulation has begun to feel byzantine. Recreational and medical marijuana are (or will be) regulated under separate state laws — and each law gives the county different amounts of leeway in the specifics of regulating weed. And interpreting the statutes sometimes calls for some speculation given the newness of the laws. Prop. 64, the new state law legalizing recreational marijuana, gives Californians the blanket right to grow six plants per residence, which in theory aren’t subject to additional complex regulations, but is also gave cities and counties the ability to prohibit outdoor recreational cultivation. One gem of clarity from Prop 64, repeatedly quoted by Deputy County Counsel Matthew Kiedrowski, calls for “reasonable regulations that reasonably regulate.”

The county’s proposed medical cultivation ordinances operate under a different set of state laws, the trio of bills that make up the Medical Cannabis Cultivation Regulation and Safety Act. Currently, the only ordinance regulating cannabis cultivation in Mendocino County is Chapter 9.31 of the county code. Absent a change this would leave the county out of compliance with Prop 64, once it goes into full effect in 2018. For this reason, the Mendocino County Counsel’s office came before the board on Tuesday, asking the board for direction in drafting an ordinance that would bring the county into compliance with that new state law.

Undersheriff Randy Johnson, who has administered the 9.31 program, asked the board to reduce the number of allowable plants from 25 to six. A letter from a neighborhood association in eastern Ukiah also requested a strict interpretation of the law, while weed farmers from across the county asked that the number of allowable plants under that particular ordinance remain at 25. “This is very confusing,” observed David Drell, of the Willits Environmental Center. The issue of Prop. 64 compliance seems almost like an afterthought, with so much discussion focused on the proposed medical ordinances.

The future of medical cultivation on the coast was very much on Supervisor Gjerde’s mind. While some growers are currently operating in compliance with Chapter 9.31, large parts of his district are in the Coastal Zone, an area regulated by state-level environmental agencies, that the new county ordinance has until now sidestepped. Gjerde expressed concern about measures that would push a substantial number of growers out of his district after the adoption of the county’s proposed ordinances — and stated his willingness to vote against adopting the proposed ordinances if the measures remain in place. Due to the Third District’s seat remaining empty and Supervisor Dan Hamburg recusing himself from cannabis related issues over a conflict of interest, the ordinances will require a unanimous vote to pass.

A clarification memo drafted by Second District Supervisor John McCowen after last week’s board of supervisors meeting states that commercial cannabis cultivation would not be permitted on small residential parcels in a number of zones. Existing cultivators on those parcels would be allowed to remain on their current sites for two years, provided they apply for, and are granted, cultivation permits within 90 days of the adoption of the ordinances.

However, the board also committed to creating an “overlay zone,” which would allow for cultivation in residential areas where it is not opposed. “I’m not expecting that to go anywhere near Deerwood,” Gjerde said, as he laid out his request for an alteration to the 90 day deadline requirement. Gjerde reasoned that growers who find themselves in an overlay zone in the future should have another chance to apply for permits.

McCowen objected, saying he didn’t like the opportunity this gave growers to “fly under the radar.” He added that “There’s no incentive for anyone who thinks they might be in an overlay zone to apply for a permit.” The incentive for growers on small parcels to seek a permit, he added, is that this would make them eligible to relocate to another area at the end of the sunset period. Their permits would be the proof they’d need to indicate that they were prior cultivators.

“To where?” Gjerde demanded. “On the coast, it’s all in the coastal zone,” which is off-limits to cannabis cultivation, as it is governed by the coastal element and under the purview of the state Coastal Commission. “It takes three votes to pass this,” he reminded his colleagues, as McCowen himself has done multiple times. “This is a dealbreaker for me.”

McCowen protested again, saying “That means that every grower creating problems…can just hang out and wait” for an overlay zone.

Gjerde characterized this statement as “A gross exaggeration,” and added that “If anybody is breaking the law, they can be busted tomorrow.” When McCowen pointed out that there are growers in the fourth district “who have been breaking the law continuously,” Gjerde offered the rejoinder that “Violations are based on complaints. And obviously these people are not generating complaints.”

Second District Supervisor Carre Brown stepped in, offering her services as referee by suggesting that staff come back with a few options.

Staff was given directions to craft language saying that all growers must apply for a permit within 90 days of the board adopting the ordinances. If zoning circumstances change, growers will have another chance to apply.

Undersheriff Randy Johnson clarified the question of interim permits, saying sheriff’s deputies would accept a copy of the front page of a permit application, as long as it had a stamp on it from the ag commissioner’s office.

You can watch the full recording of the meeting here. Here’s the map of proposed zoning, with a memo from Supervisor Gjerde outlining his concerns below:

Subject: Color-coded maps beg the question: How do people proceed?

At last Tuesday’s Board of Supervisors meeting, we attempted to address concerns raised by members of the public, and in a number of cases I believe the board was able to successfully address the concerns and aspirations of those in attendance.

However, as we approach adoption of these ordinances, I believe it is appropriate for some ground-truthing of our plans. Will the residents of all of our communities have a legal path forward? Will cultivators who want to apply for permits, and are willing to pay County taxes, have that opportunity?

I am requesting you review these maps, and this memo, before considering one question: How can cultivators on the Mendocino Coast, even existing cultivators who are currently paying fees to the County and are clearly not creating problems, proceed into this new program we are on the cusp of creating for the County?

I am requesting you review these maps, and this memo, before considering one question:

How can cultivators on the Mendocino Coast, even existing cultivators who are currently paying fees to the County and are not creating problems, proceed with this new program we are proposing for the County?

3 thoughts on “Tensions flare in supes’ negotiations over pot ordinances”