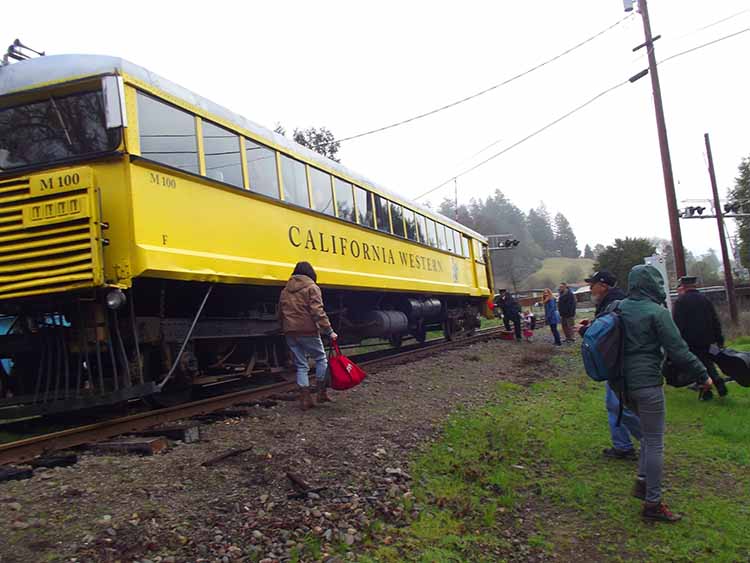 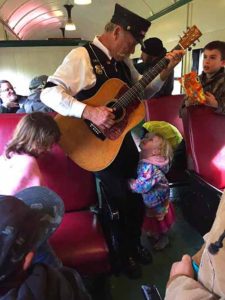 WILLITS/NORTHSPUR 2/22/2017 — You know how you never do the most obviously fun thing in the neighborhood where you live unless you’re entertaining guests from out of town? Well, I’ve been in Mendocino County for about ten years, and the only time I’d ridden the Skunk train from Willits to Northspur and back was about fifteen years ago. It was a long weekend, I came up from out of town, and a local decided to show me around. 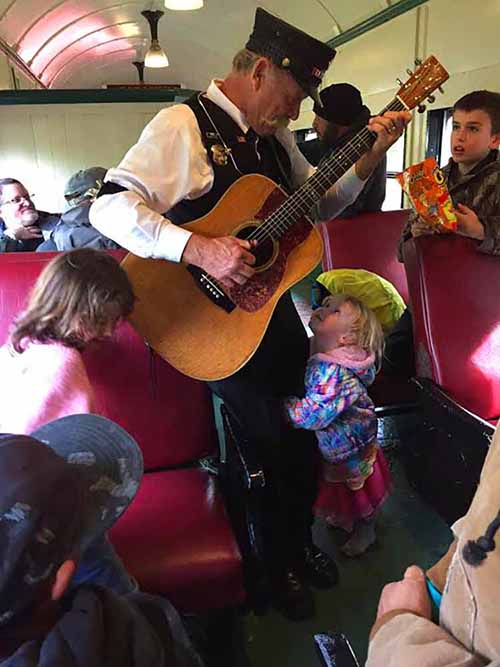 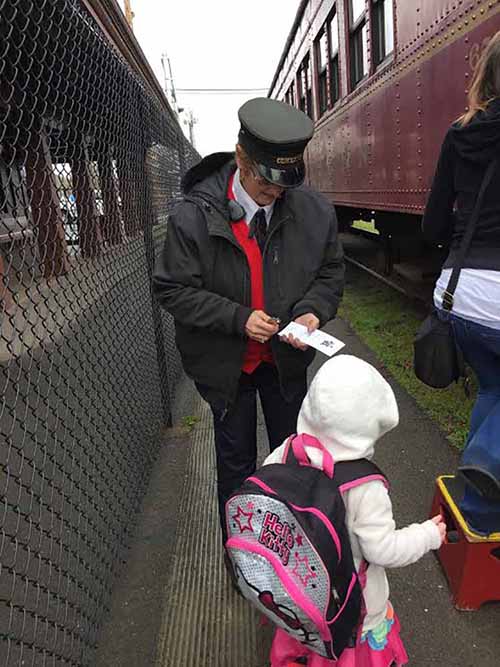 The author's niece, Annika, getting her ticket punched by conductor Pam Baskins 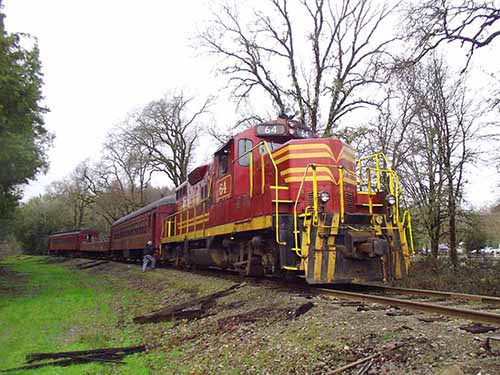 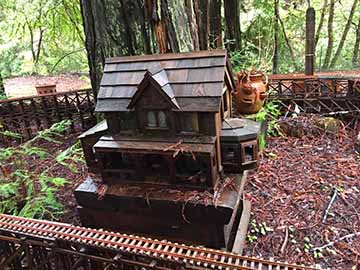 The first time I took the train, it was summer, and crowds of people stood in line at Northspur for BBQ tri-tip sandwiches. I remember someone in the ladies’ room shouting, “There’s too many people here! I hope I don’t get shy bladder!”

This time, as we got on in the heavy mist and chugged off into the redwoods, there was a bracing sense of heading into a real adventure. It was like stepping onto an old ferry boat in inclement weather. You’re pretty sure you’ll make it, but it’s still the ideal setting for a shanty or two about shipwrecked sailors.

There is a train version of sailor shanties, as it turns out. TRAIN SINGER® Greg Schindel, who consults a pocket watch and stashes six harmonicas on his person in ammunition clip holders, provided a soundtrack as our locomotive made its way along the tracks. We were in #64, a big red engine built in New York in the 1950’s for Southern Pacific. Number 64 didn’t join the Skunk fleet until the 1990’s, about forty years after the Skunk shifted away from hauling loggers and lumber out of the woods and bringing tourists into them.

Annika is three years old, so her idea of a good time involved jumping up and down on the vintage train car seats and screaming along to Shindel’s musical numbers. Schindel is good, using the rhythm of the train wheels on the tracks as a kind of incidental percussion to his songs. There’s only so much variety in a three-year-old’s jumping patterns, so maybe she provided a little background percussion, too. When Annika wore herself out and lay down to recharge for another assault on the fairytale mystery of the ride through the redwoods, Schindel strummed his guitar softly and sang a hobo’s lullaby.

We pulled into Northspur around noon, where I carved up a pineapple and tried to wedge pieces of it into Annika’s mouth as she tore past, playing tag with another little girl.

There is no BBQ at Northspur in February, so the picnic area had a little bit of an abandoned fairgrounds feel to it. In addition to the snack shack and picnic tables, Northspur features a redwood dollhouse with miniature furniture, and a glistening carafe of lemonade with lemon wedges in it. The house is a mystery, and the lemonade is a nod to low-maintenance guests who are happy to pull up their hoods and stomp their feet to keep warm and peer into the woods looking for bears’ dens. The children informed us, with evident delight, that there is a cave on the tracks, with dinosaurs inside of it. The more conventional version of that feature is that it’s Tunnel #2, but that’s boring, so let it be a den containing giant prehistoric reptiles.

One of the wheels came off the track, just before we crossed Highway 20 to come back into Willits. That happens sometimes in the rain, as the ground shifts and the track, which has lots of wooden parts and is over 120 years old, slithers around in the mud. The train barely shivered as it glided to a halt.

There is a picture of a capsized train in Katy M. Tahja’s book, “Rails Across the Noyo: A Rider’s Guide to the Skunk.” Tahja writes that “Three linked runaway diesel engines derailed in January 1970 after rolling down the grade east of Summit Station. The engineer and fireman tried to stop the lead engine but the air brake failed and they jumped to safety before the engines rolled over into an embankment on a curve.” That sounds like an adventure, but who wants an adventure when you are busy doling out fresh fruit and supervising a game of tag on a moving train? 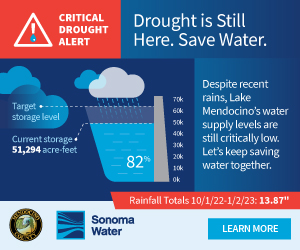 Instead, we had a singalong. Schindel’s repertoire ranges from the editor’s cut of “Oh, Susanna,” which is approximately 9,000 verses long, to his own “off the tracks” style of Northern California transcendental folk-jazz. He also does Hank Williams and ACDC.

As the passengers clustered together uncertainly in the dining car for extra helpings of beer and popcorn, Schindel tore through several anthems to train travel and led a batch of kids in a complicated rendition of “She’ll be Coming ‘Round the Mountain.” Then he smashed his guitar, set it on fire, and belted out a version of ACDC’s “Crazy Train” that made him a YouTube sensation as soon as the passengers made it back to a Wi-Fi hotspot.

I’m kidding about the vandalism and the arson, of course. But he panted and screamed and did not dim the shine on his shoes or lose the curl in his conductor’s mustache for a moment.

We were inconvenienced for entirely too short a time, since the motorized yellow engine M-100 clanked to the rescue before the train got really crazy. The M-100 was built in Kentucky in 1925 as a “passenger rail bus,” according to Tahja. It’s kind of a trolley car, kind of a bus, but also very much like a train. We abandoned our big red engine to the engineers and trooped onto the rail bus for the last few minutes of the ride.

Annika, who lives in San Francisco and often rides the no-nonsense BART through dark tunnels that most emphatically do not contain dinosaurs, declined to say if #64 or M-100 was superior to the Fremont line. They are not the same species at all.