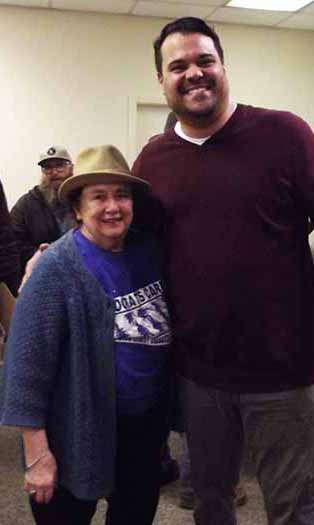 “It’s really quite an honor,” said Muchowski. She was not told exactly why she was selected, but “I have worked in the women’s arena for a long time.” The congratulatory email from McGuire’s office to Muchowski, which she shared with The Mendo Voice, says, “It’s women like you who continue to inspire and bring positive change to our local communities.”

Originally from Buffalo, New York, Muchowski and her husband moved to the Anderson Valley in 1976 and began to build a geodesic dome. “We just have a few things to finish off” on the dome, she said in an interview on Wednesday. She started out teaching primary grades at the Anderson Valley elementary school, then taught at a continuation high school and finished up at a small alternative school called Rancheria, which is still in existence.

After 30 years as a teacher and teachers’ union activist, Muchowski now serves on the North Bay board for retired members of the California Teachers Association. She has been a delegate to the Democratic Party since 1982, and will be a delegate to the state convention this May. She has worked on a number of committees, including candidate development and services. This ties in with her work on the Mendocino Women’s Political Coalition, which she said is “Always looking for a woman…we need women in Fort Bragg,” as there are none on the current Fort Bragg city council. The coalition is also gearing up to find a woman to run for the first district supervisorial seat in a few years, as Carre Brown just started her last four-year term.

Muchowski also started a radio program on KZYX called “Women’s Voices” in 1989, as a way to let women around the county know what kinds of activities other Mendocino women were engaged in. While she interviewed a number of female political representatives, the highlights that came to mind were two poets: Fionna Perkins, who was born before women had the right to vote, and Sharon Doubiago, whose feminist ecological poetry “Just outraged all these male chauvinist environmentalists. It just pushed their buttons, I guess,” Muchowski recalled. “It was fun. It was a good rowdy discussion.”

Muchowski will be honored at Equus Steakhouse in Santa Rosa on March 3, where she will be introduced to the other honorees from the Second District, which extends from the Oregon border to the Golden Gate and includes Trinity County.