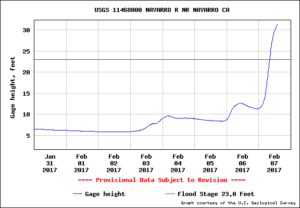 Hwy 1 is closed at the Garcia River. Both lanes of 162 are closed near the 101. Elfin Glen near the intersection of 1 and 101 is flooded. Here’s a video from CalTrans’ FB page:

Here’s a list of locations where sandbags are available, courtesy of the Mendo County Dept of Transportation:

The Mendocino County Office of Education reports that the following school districts are closed:

The following school districts/schools are currently reported as being closed per MCOE:

The 101 north of Willits has a lot going on this morning. There is a flood on the 101 just southwest of Dos Rios. No further information was available as of 7am. Two separate slides just north of Brooktrails are blocking the northbound lanes.

Several roads in Willits, including East Commercial Street, have been closed overnight due to flooding. Residents are warned to use caution and watch for signs notifying drivers of flooded or closed roads. Sandbags are currently available at the Willits Police Department.

As of 6:30am, CHP is listing mud, dirt, and rocks in the road at multiple locations, including Oil Well Hill, and Shelter Cove two miles from Paradise. No traffic incidents are currently reported south of Commercial Street in Willits but drivers should still take caution, high winds are also bringing branches down in the roads and small rocks are plentiful on both city streets and highways.

NOAA predicted on Monday afternoon that the Navarro may reach flood levels, which could close Highway 128. As of 4:15am Tuesday, the river had reached 13.6 feet; flood stage is at 23 feet. The river is expected to crest at 23.5 feet around 2pm Tuesday afternoon and then begin receding. Rain is expected to continue through Friday, with the highest rainfall amounts (at least an inch) predicted for Wednesday and Thursday.

PG&E outages are also reported across the county, including up and down the coast near Elk, Albion, Mendocino, Point Arena, Fort Bragg, and Rockport. Outages are also reported inland, in Philo, Hopland, Leggett, between Dos Rios and Covelo, Laytonville, and Willits. The county’s biggest current outage is in Brooktrails, with over 600 customers without power. We’ll update as more information becomes available.

Sherwood Road between Primrose and Brooktrails Drive is NOW OPEN, after being closed, due to a tree down into power lines.

There was a crash at 4:30pm yesterday in Gualala.

Further north, the slide on Rt 1, just south of Mill Bank Resort, is expected to be cleared up in the middle of the month.

Rt 175 is closed at the Russian River due to flooding. The Navarro is expected to flood, which may result in the closure of 128 at the mouth of the river. Here are some graphs of the two rivers, as of early this morning, courtesy of the USGS website: 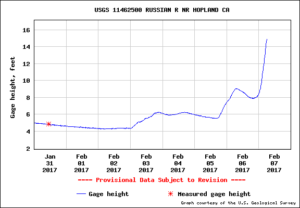 Russian River at Hopland, 6am 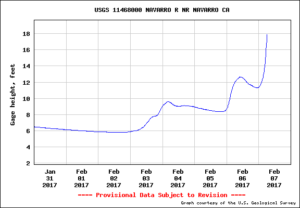 One thought on “Roads, weather, flooding and outages on Tuesday updated 3pm”